The poems that I am going to compare are Andrew Marvell’s (Marvell) “To His Coy Mistress” (Coy). A man called Andrew Marvell who was born in Winestead in Holderness and was the son of a vicar wrote “Coy”. He also attended all the Grammar schools in hull. Although most of his poems weren’t published until after he died they are favourites for schools to do coursework and to study for examinations. The other poem is Aphra Behn’s (Behn) “The Willing Mistress” (Willing).

Don't use plagiarized sources. Get your custom essay on
“ Poetry Andrew Marvell vs Aphra Behn ”
Get custom paper
NEW! smart matching with writer

Both the poems have some similarities like they both use archaic language although “Coy” uses it more “Willing” does. They were both wrote in the 17th century.

The main idea of “Coy” is to persuade a female person that he likes into going to bed with him. He try’s this by using the power of persuasion. Although we don’t actually know if his way worked it would be nice to think that it did, because of this there is no story behind “Coy” Whereas in “Willing” the main idea is t tell you about a sexual liaison that a woman has with her boyfriend “Amyntas”.

Because of this there is a story behind “Willing”. The story is of how she gets led into the shade of the grove and gets passionate sex made to her by “Amyntas.”

The mood in coy is sexual frustration because he can’t get this girl to come to bed with him by normal means so he try’s to seduce her.

But in “Willing” the mood is different in the aspect that “Amyntas” has got his female companion to make love to him in a public place so he is therefore happy which makes the mood very happy.

The imagery used in “Coy” is that of a blissful and disgusting nature. This is because “Marvell” refers to the mistress being able to lose her virginity to him if they had all the time in the world but he then goes on to say that they don’t so it will have to be the worms and other bugs that will take her virginity as he is getting old and won’t be able to wait for her for to much longer.

The imagery used in “Willing” however is much different. This is because “Behn” describes how they won’t be caught as the sun is on their side and that they can play sexual games without being caught.

“Coy’s” structure is that it has three distinctive stages but only the one stanza when “Willing” has three stanzas. However they both use the same line structure.

In “Coy” there is no rhythm as such but in “Willing” there is and that is a regular rhythm.

Both “Behn” and “Marvell” use poetic devices in their poems such as metaphors and similes.

I wait for the right think that the poets message in the poems is that you can’t always person but if you find that person don’t let them get away. 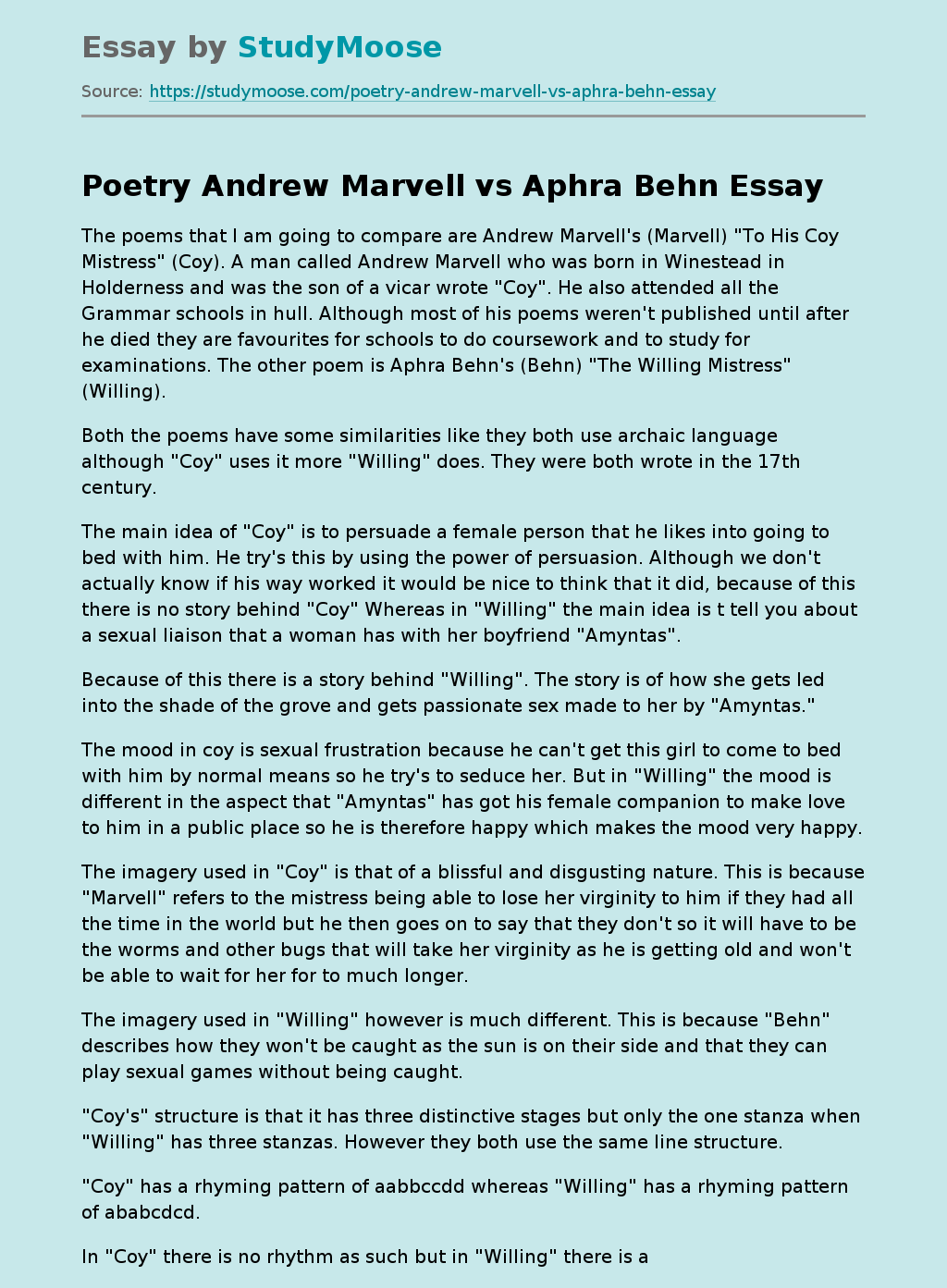