The poems of Seamus Heaney and D.H.Lawrence

The second stanza is the most emotive one of the entire poem. It is still about the kittens: ‘soft paws scraping like mad’, which creates a picture of kittens trying to escape their fate. Alliteration and caesura are also used in this verse, both putting emphasis on ‘But their tiny din was soon soused’. ‘They were slung’ also shows how Dan Taggart does not care for these kittens. Dan does, however, think he is doing the animals a favour: ‘”Sure isn’t it better for them now? “‘ and the kittens would also be used as compost on the farm: ’till he sluiced them out on the dunghill’.

Don't use plagiarized sources. Get your custom essay on
“ The poems of Seamus Heaney and D.H.Lawrence ”
Get custom paper
NEW! smart matching with writer

This also shows that there is a sense of life continuing on after death. Heaney uses a simile in this stanza ‘Like wet gloves’, which is comparative to their uselessness now. Seamus Heaney, does care for these kittens though, and portrays emotions: ‘suddenly frightened’, ‘for days I sadly hung’. ‘Watching the three sogged remains’ shows he is still “mourning” for them.

Heaney uses enjambment to carry over the end of this verse to the next, to keep the poem flowing. The next verse is about when Heaney finally forgot about the kittens; Dan starts to murder lots of other animals.

‘Dan trapped big rats, snared rabbits, shot crows… pulled old hens’ necks’. Dan Taggart is just doing his job by killing all the pests on the farm, but Heaney really doesn’t want to have to be a part of it. In the next stanza, it appears as if Heaney has changed his opinions and feelings towards what is happening: ‘And now, when shrill pups are prodded to drown I just shrug, “Bloody Pups”.

It makes sense’, but he is not completely convinced. He has got used to the murder, because he is trying to mature and fit in with the farm folk.

The last stanza states how the town thinks what is happening on the farm is wrong and that ‘death is unnatural’. Both of these Heaney poems are mainly about death and the transformation between childhood and adulthood. ‘Mid-Term Break’ mainly focuses on the respect Heaney gets as he is growing up, whereas ‘The Early Purges’ is about different opinions being forced on you. They both involve Heaney having to deal with saddening situations alone. In ‘Mid-Term Break’, Heaney experiences many different emotions continuously, like grief, embarrassment, sadness and even loneliness.

In ‘The Early Purges’, the main emotions he goes through are sadness then acceptance. ‘Piano’ by D. H. Lawrence involves him remembering and reminiscing about his mother. In this poem Lawrence reflects about his past time spent with his deceased, yet beloved mother. The piano is a symbol of Lawrence’s childhood and has happy memories of his past with his mother. ‘Piano’ also is a musical term, which means play something softly. This poem is very nostalgic, and the rhythm is irregular. Lawrence uses rhyming couplets to differentiate the present and past. The poem is very soft, calm and peaceful.

In the first stanza, Lawrence is listening to a woman singing, which reminded him of his mother and of the past. ‘Taking me back down the vista of years’, means that Lawrence is taken into his past memories and he remembers: ‘A child sitting under the piano, in the boom of the tingling strings And pressing the small, poised feet of a mother who smiles as she sings. ‘ In these two lines, you can start to understand the bond between Lawrence and his mother. His mother was an elegant lady, with ‘small, poised feet’. Lawrence uses caesura to put emphasis on the little things, which again conveys his love for his mother.

Lawrence also uses sibilance, onomatopoeia and alliteration in this poem. ‘In spite of myself, the insidious mastery of song betrays me back… ‘ means Lawrence doesn’t want to forget his mother or her memories, and his ‘heart weeps to belong’, shows how much he misses her. In this poem Lawrence uses shorter lines when he is in the present, but much longer lines when he is in the past, and this shows just how many more memories he has of the past with his mother. In the last verse of this poem: ‘So now it is vain’ means now it is pointless, and ‘appassionato’ – another musical term – means passionately.

These two terms show how Lawrence now believes it futile for the singer to play the piano passionately, because he is not listening anymore. ‘The glamour of childish days is upon me, my manhood is cast down in the flood of remembrance, I weep like a child for the past’ is the conclusion of the poem, and it portrays many things. It shows he was wrapped up in the glory days and glamour of the memories of his childhood. The other Lawrence poem is called ‘ Discord in Childhood’, and involves a fight between his parents, including his violent father beating his mother.

It is a very short poem that indicates a sharp, harsh poem. ‘Discord’ implies a poem with lack of harmony and peace, although ‘Childhood’ is a happy time, full of great memories, so similarly to Heaney, Lawrence’s childhood has not been ideal and flawless. The title clearly shows an incongruous juxtaposition, which means two ideas unrelated side by side. ‘Discord’ is disharmony and ‘Childhood’ is freedom. This poem is full of violence, noise and anger, and the rhythm is irregular because of the storm outside, Lawrence uses to compare his parents’ fight with.

The first stanza of this poem is set outside and the second inside the house. This represents a literal storm, and a metaphorical storm. Again, Lawrence uses lots of onomatopoeia and personification: ‘the lash of the tree shrieked and slashed the wind’. Lawrence uses quite harsh and violent language to represent the storm and ‘weird rigging in a storm shrieks hideously’, compares the tree to the ropes on a ship’s mast. The whole first stanza describes the storm outside, and the second, the storm inside. ‘Within the house two voices rose in anger…

‘ These two voices are Lawrence’s parents, just beginning their fight, although Lawrence’s mother’s voice is described as ‘a slender lash whistling delirious rage’. The sound ‘of a thick lash booming and bruising’ is ‘dreadful’. The ‘thick lash’ is his father, and Lawrence uses alliteration again. ‘Booming and bruising’ shows pain – his father is starting to hit his wife. ‘Until it drowned the other voice in a silence of blood, ‘neath the noise of the ash’ shows how Lawrence’s violent father one the fight, because he hit her and caused blood. ‘Silence’ is important, because D. H.

Lawrence is upstairs at the time, listening to the fight, but now he does not know what has happened, so he was terrified and extremely nervous. ‘… ‘neath the noise of the ash’ links back to the first verse and implies that nature is more powerful than man. Lawrence uses pathetic fallacy in this poem, which is when weather, is used to reflect the human world, and this gives a great affect on the poem. In both of these poems written by D. H. Lawrence, there are his memories of his parents: good and bad. Good memories of his mother in ‘Piano’, and bad of his father in ‘Discord in Childhood’.

These poems make Lawrence really reflect on his childhood memories, and he goes through many emotions in both of these poems; sadness, regret and vulnerability. The key figure in Lawrence’s life – his mother – is alive in ‘Discord in Childhood’, but not in ‘Piano’, and Lawrence has happier memories of his mother when she is not alive, than when she is. There are a few similarities between both the Seamus Heaney poems and the D. H. Lawrence poems. Both poets used lots of modern techniques; alliteration, onomatopoeia, personification, caesura and enjambment. All of these poems are to do with childhood memories, family and growing up.

Seamus Heaney witnessed murder in ‘The Early Purges’, which was horrifying for him, and Lawrence also went through a horrible thing in ‘Discord in Childhood’. He had to helplessly listen to his mother being beaten by his father. In ‘Mid-Term Break’ and ‘Piano’, close family members have died, although Heaney doesn’t reminisce about the memories of his deceased brother, like Lawrence did with his mother. Heaney was more concerned about how awkward he felt at the funeral, than mourning for his brother. I think there are many similarities and differences between the poems and the poets.

Heaney seems to be able to convey and describe lots of childhood memories and feelings, in long poems, whereas in Lawrence’s much shorter poems, he is having a hard time dealing with certain things. My favourite poem here is ‘Discord in Childhood’ by D. H. Lawrence, because he conveys lots of interesting information using many modern techniques, and because of the way it is written, I can really understand what a hard time he is going through. I also like both poems by Seamus Heaney, because he has very interesting childhood memories, and expresses his feelings in a way, so the reader can really imagine how he is feeling.

The poems of Seamus Heaney and D.H.Lawrence. (2020, Jun 02). Retrieved from http://studymoose.com/poems-seamus-heaney-d-h-lawrence-5087-new-essay 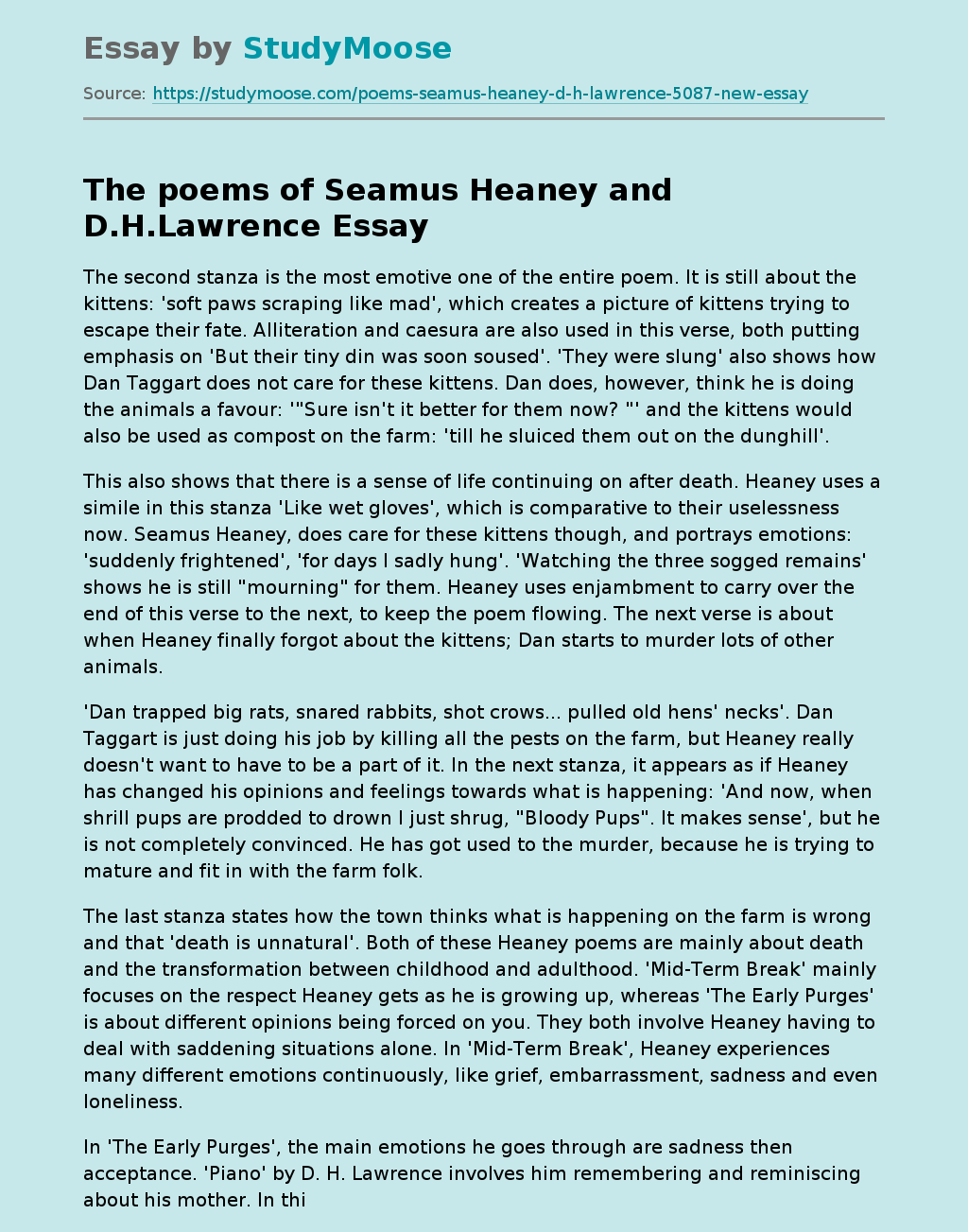