The poem ‘Death the Leveller’ was written for the upper class educated. Many other people could not understand it. It holds many words that people in the late 1500’s didn’t understand. Words like ‘Sceptre’- an ornamental rod held by a king/queen as a symbol of power are used in ‘Death the Leveller’. Shirley’s argument is that a high rank+ position wouldn’t last and we can’t defend ourselves from death. He tries to make us see that good and just actions will live on, but no matter how rich or poor you are, we will all be judged the same in death.

‘Death the Leveller’ also has a rhetorical side, and Shirley’s tries to put his point across by using phrases like; ” The boast no more about your mighty deeds”.

The structure of ‘Death the Leveller’ is a 3-stanza poem of similar shape and length giving it a stereotypical look, except for lines 5 and 6 of each stanza were the lines are given emphasize, as they are the main parts.

Words used in lines 5 and 6 of each stanza are very similar, example;

“Sceptre and Crown must tumble down” and “Early or late, they stoop to fate”. Two words that don’t rhyme are used first, and then the last word of the line always rhymes with the third word used. Many of the words and phrases used are symbols of royalty such as ‘Crown’, ‘Garland’ and ‘Swords’ and ‘Armor’ are used. These are a sign of war or battle. ‘Death the Leveller’ generally has a rhyme sequence of AB, AB, CC, AD. ‘Come and tomb’ in stanza three are an exception.

The poem is written in English, and was printed at the time of the parliamentary victory for Oliver Cromwell and the execution of King Charles I. Undoubted, such drastic events traumatized writers like Shirley who had sympathized with the monarch. That’s why he uses royalty in ‘Death the Leveller’ and death as the main theme. He uses personification with death, example; “Death lays his icy hand on kings”. Shirley has given death an icy hand which is placed upon something that Shirley once sympathized with, but is now gone. He uses alliteration in ‘Death the Leveller’ to emphases the harshness of implements used in burial.

The tone of ‘Death the Leveller’ is a slow, eerie tone that someone speaking at a funeral might use. The tone stays the same except when emphasizing harshness of cutting implements. It then changes back to the normal tone at the last two lines, but gets a bit softer when the poem concludes to bring back the ‘death’ feeling. The tone throughout ‘Death the Leveller’ is generally the same, but when colons are used it’s emphasized. Yet at the end of line six on the last stanza, a colon is used to show a change in tone and structure.

In conclusion, ‘Death the Leveller’ is an eerie, chilling, serious and somber poem with a hint of melancholy. Its tone can be quite mocking and ironic in reference to those who were successful in the past. The speaker’s attitude is very determined and patriotic and run on lines add strength and urgency to argue his point, which is, 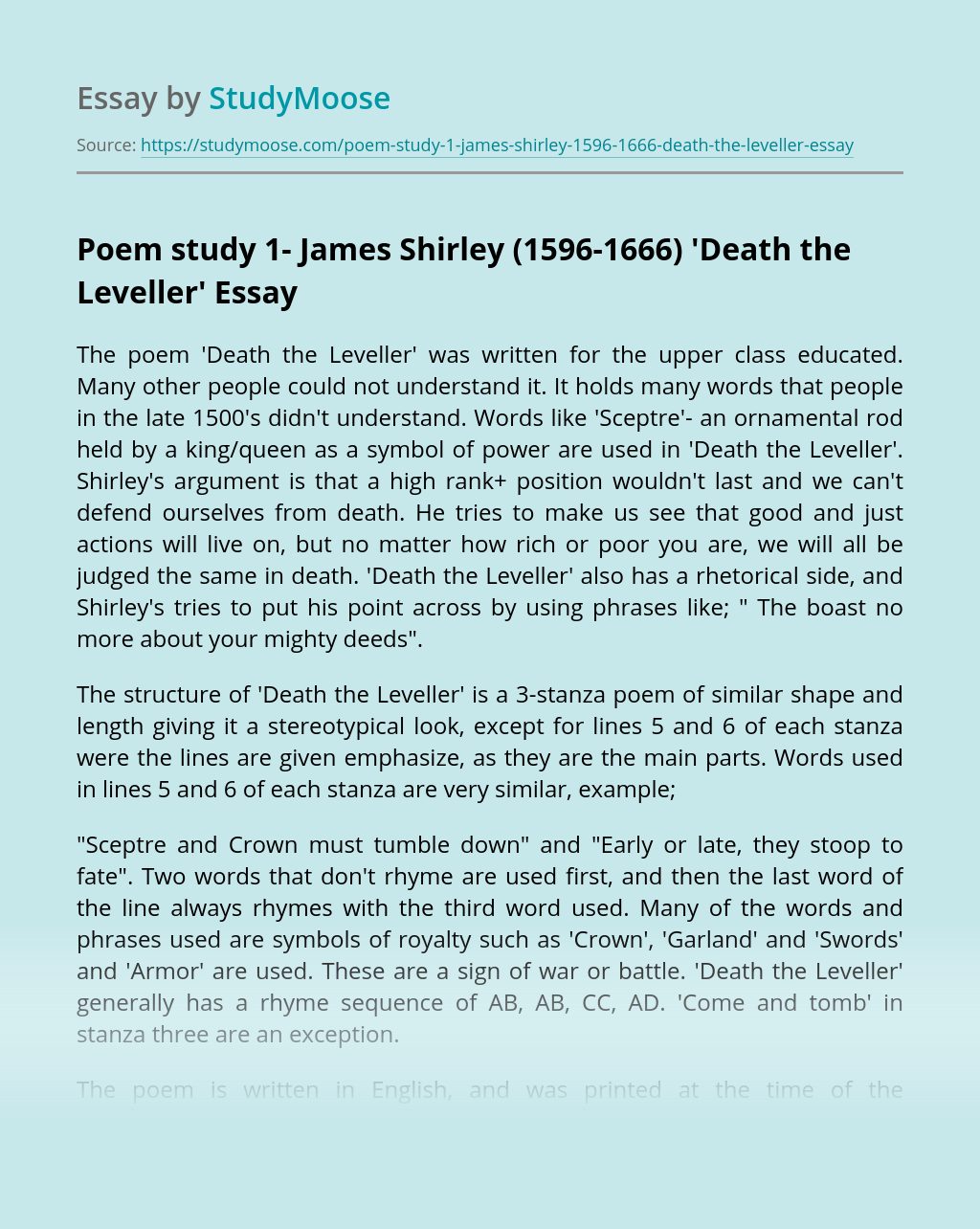 A need for old age homes in modern times

It’s a shameful state of affairs that there has arisen a need for old age homes in modern times. Why do we need these homes? Why are we considering our older relatives as a burden on us? Not too long ago we used to have a strong joint family system. It was an unquestioned norm...

Dylan Thomas once wrote “And death shall have no dominion”. William Shakespeare’s tragedy, Hamlet, is a provocative play that portrays how a young prince struggles with his philosophy of life and death after the death of his father. Hamlet, the prince, has trouble overcoming his father’s passing as he also has to deal with its...

Exposition – Dead Poet’s Society Neil’s suicide was more his father’s fault than that of Keating. Do you agree or disagree? The movie ‘Dead Poet’s Society’ produced in 1989 by Peter Weir unfolds many perception of life during the 1950’s. The Welton Academy, the place where the movie was filmed, sets a great example as...

View sample
Death on the Nile: Novel and Film

Agatha Christie’s 1937 unique Death on the Nile (adjusted by Nancy Taylor for Penguin Readers in 2008) tells the murder mystery novel of a rich, upper-class and girl her name is Linnet Ridgeway who marries the fiancé of her best friend Jacqueline. Linnet and her partner Simon go to Egypt to spend their honeymoon there....

Where The Red Fern Grows, by Wilson Rawls, follows the life of a young boy called Billy who lives in the Ozark Mountains with his Mamma, Papa, and three siblings. Since of his enthusiasm for coon searching, he secretly saves up for 2 searching dogs, and names them “Old Dan” and “Little Ann”. They go...