Edgar Allan Poe was a great American novelist and poet, whose writing style was inimitative and unique. He wrote his tales in a special genre which now can be defined as Gothic. Most of his works concern the theme of death or the afterlife. The spirit of death that rewards or appeals to revenge prevails over his characters. His novels are full of symbols that the readers should interpret tremselves. He is the master of words, and every word in his writings is a key or a clue to the denouement of a situation or the background of events. The author forces his readers to act like  detectives, to piece the entire picture together bit by bit like a puzzle. 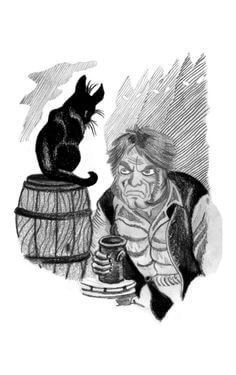 The Most Personal Story

Edgar Poe suffered from alcoholism and died at the age of 40. One morning, not far from the bar, the writer’s body was found. Circumstances of his demise still remain unknown. The world has lost a talented person. In his work, Edgar Poe reflected his worldviews; thus, The Black Cat is one of the most significant stories of all he created. It is a story about an alcoholic who destroys himself from within, sowing ruin around with his addictive habit.

A Cat as a Symbol

The writer often used symbols in his work. His favorite ones were a raven and a cat. A crow has long been considered a harbinger of the world of the dead. Even today its croak makes an ordinary person wince and look around. It is believed that a crow calls trouble.

A black cat is even a more esoteric symbol. It is a common character of folklore and literary works. It has an anthropomorphic image in folk and literary tales, novels, and people’s beliefs; it is also endowed with different human qualities. Moreover, this image has deep mythological roots used by Edgar Poe in his story.

The cult of a cat as a demonic (or supernatural) being was common in many ancient cultures. So, for example, in ancient Egypt, the goddess of beauty and fertility Bast (Bastet) was portrayed as a black cat. The ancient Slavs considered the black cat a symbol of the underground kingdom; in Europe, it was regarded a constant companion of witches, to whom mystical properties were attributed. This mythological image could be associated with pagan notions about another world. Perhaps the black cat was associated with the demonic kingdom because it was a spirit-god of paganism.

Often in popular beliefs the cat is perceived as a devil or his assistant. It is believed that cats see otherworldly “guests.” Perhaps that is why the black cat is an inalienable attribute of a medieval witch. This trait has been widely used in the literature of different peoples and eras. It was especially popular during the era of Romanticism when writers turned to the mystical side of life, and Poe was one of them.

The black cat symbolizes a bad omen, and at the beginning of the story the narrator remembers his wife’s words that “all black cats are witches who have converted.” His first cat is named Pluto after the name of the Roman god of the underworld. This animal is the embodiment of mysticism.

However, this image can be interpreted in several ways. This is a story about the destruction of human nature. The protagonist reduces his life to drinking alcohol, which causes a range of various emotions in people who often consume it. Someone falls asleep after drinking; another person might be quiet, while other people become extremely aggressive. It is aggressive behavior that prevails in the life of the protagonist. He does not want to drink, but he drinks. He does not want to hit, but he hits. Uncontrolled drinking of alcohol leads to an uncontrolled destruction of everything around. Thus, a black cat is a symbol of the abyss, the underground world into which the narrator gradually descends with the use of alcohol. And while at the beginning of the story this underground world was manifested only in the weakening of reason, then at the end of it, the main character will actually go there  because he is doomed to the death penalty for the brutal murder of his wife and the concealment of the crime.