“There’s an honest graft and, I’m an example of how it works…I’ve seen my opportunities and I took ‘em” (3). An excerpt that defines the confident and political leader: George Washington Plunkitt. As a brilliant and successful businessman Plunkitt managed to use his method of machine politics to win the heart and commitment of people and political power. In the novel Plunkitt of Tammany Hall, author William L. Riordon, Plunkitt’s political reporter who records the many lectures Plunkitt presented at Tammany Hall.

Don't use plagiarized sources. Get your custom essay on
“ Plunkitt of Tammany Hall ”
Get custom paper
NEW! smart matching with writer

The book emphasizes on Plunkitt’s advocacy for political control and the political machine that helped him gain wealth and a political seat in Tammany Hall.

In other words, the corruption of gaining political or business power used from bribery. Plunkitt’s term for “honest graft” has to do with the example of purchasing and selling off land for business projects. For example, if the town begins discussing a specific piece of land to be used for a community park, Plunkitt would buy that piece of land, inflate the price, and sell the property to the project developer. Plunkitt finds his way of profiting “honest”; I call this taking advantage of ones political power. As an “honest” Irish-American Plunkitt knows how to take advantage of the game and he will continue to play it until sand turns into stone.

With the ability to win over voter’s hearts and gain political support Plunkitt comfortably knows how to keep a seat in Tammany Hall. One of his, again, “honest” tactics, Plunkitt knows how to target specific types of voters. In the chapter “To Hold Your District”, Plunkett claims how to target the lower class people. He would start house fires so that the poor would not have any clothing or food. Then Plunkitt would act as a friend to the people giving them quarters for clothing and food to win the heart of the people. In other words, he was gaining a vote. Plunkitt would even hand out candy to children to promise to make sure their parents were voting for him in elections. As a corruption to society, Plunkitt knew how fake the political act and win people over with friendships. According to Plunkitt in order to become a politician in Tammany Hall one must know how to bluff. Everything was about winning a vote, whether it was taking someone to a baseball game or handing out candy to children. What ever it took.

As a business and political man, Plunkitt knew the political game inside and out. With corruption, he managed to continue to remain in office for countless years. Even though Plunkitt’s grammar was inferior to a professors’ or college graduate, it had nothing to do with being a political powerhouse. A politician had to have common sense and know how to gain ones trust, even if it meant dishonesty. By selling himself and taking advantage of political and business opportunities with “honest” or “dishonest” graft, Plunkitt attentiveness always kept himself in front with wealth and politically. 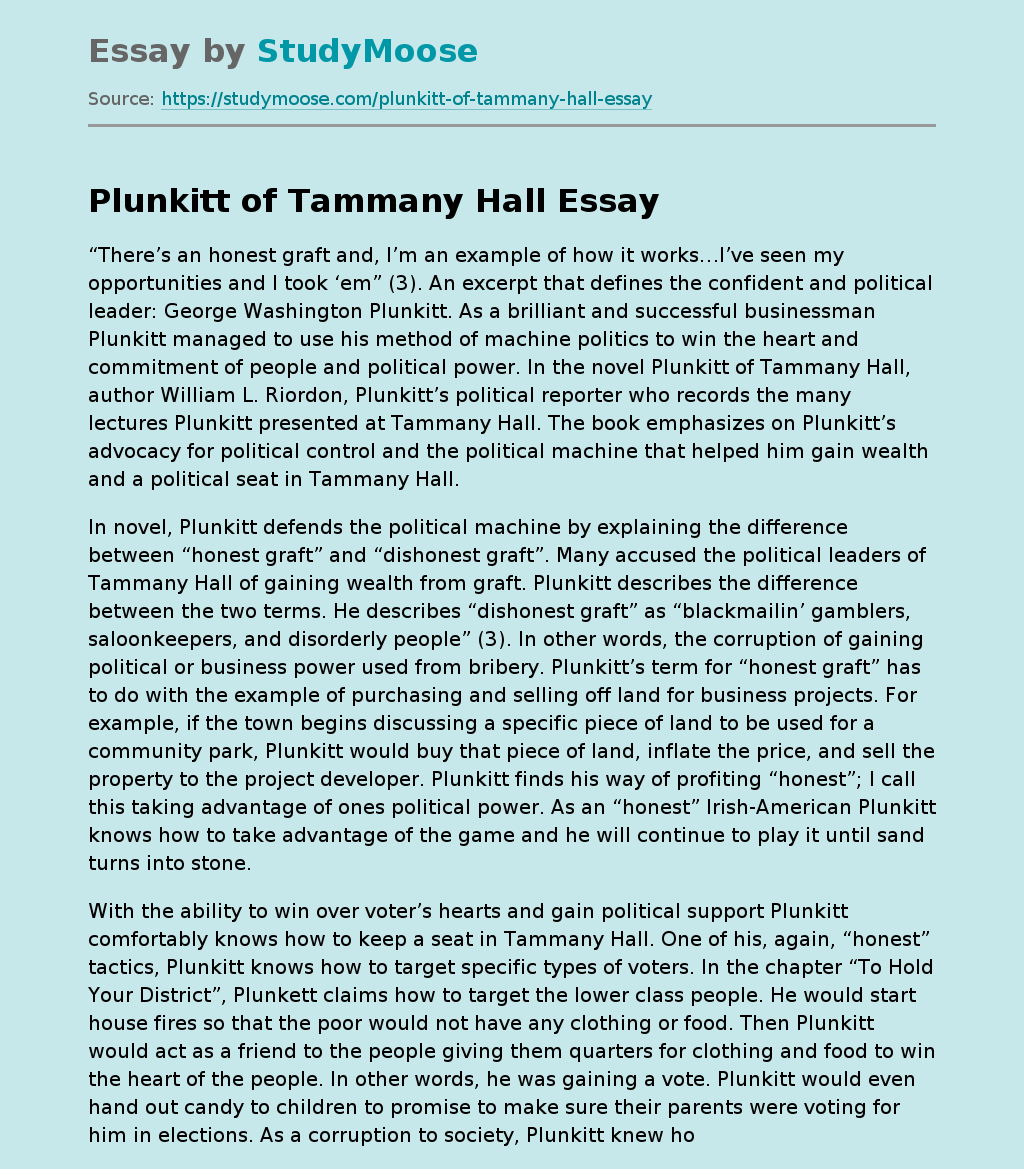