The effect is that we see Mickey’s and Sammy’s minds stuck in the past, as if they are still children. We think that life is not quite real to them, they don’t believe it, it’s just a game. This reveals that maybe, although Mickey is forced to act in an adult way, he still remembers his childhood, and is still a child inside, shocked to find that the game has become real. We, the audience, are shocked also, because this is when we realise that childhood is really over.

Don't use plagiarized sources. Get your custom essay on
“ Plot Analysis of a Play Blood Brothers ”
Get custom paper
NEW! smart matching with writer

The job of the Summer Song is to be a watershed of the play, because everything changes after it. “Growing up” is an important concept in Blood Brothers.

It is one of the consequences of the class divide, separating Edward and Mickey. After the summer song, which epitomises their childhood, they are 18, and straight away we can see the difference. “MICKEY, LINDA and EDWARD enter, laughing and exhausted.

” to the scene after the Summer Song. The scene is Linda and Edward, and Mickey isn’t there. This is because he is working overtime, showing that he already has had to leave his childhood behind in order to stay alive. However, Edward is going to university, and hints to Linda that he loves her. He has a good future ahead of him and a lot of money.

When they made the Blood Brothers pact, they were children and now that Mickey has been forced to grow up, after losing his job, he thinks that they aren’t friends anymore, and has grown out of his old, “childish” ideas.

Edward hasn’t realised that the relationship between himself and Mickey has changed over time. “EDWARD: I thought we were… were blood brothers. MICKEY: That was kids stuff, Eddie… You are still a kid, aren’t y’? ” Russell uses Edward as a representation of all that is bad about the upper classes. He is made to appear unsympathetic and selfish. “Why is a job so important? ” he says.

This is an ironic comment considering that at the time, many people were losing their jobs and unemployment was at a record level Russell does not have much sympathy for the upper classes and uses every opportunity to demonstrate this. The moral of the play is very clear -it is wrong that the rich get richer at the expense of the poor. Edward eventually takes everything from Mickey. The song “Take a letter Miss Jones” tells the story of how the workforce was just considered as a resource. It’s insensitive, with a cheery tune which makes it sound fake and insincere. Russell is making fun of the upper class.

The cheerful atmosphere of it adds to the heartless meaning. It includes repetition, so we know that people are being fired again and again. It’s very unsympathetic, showing how the rich, unaffected upper classes are condescending to the lower classes. It is significant that Mr Lyons, Edwards’s father sings “Take a letter Miss Jones” because it shows the audience what Edward will become. For some, the 80s was a time of unfairness and discrimination and is referred to throughout Blood Brothers. Class is more important after the Summer Song because the boys are 18 and looking for jobs. As adults, they are judged by class.

The lyrics to the summer sequence are in four main groups; Innocence and youth, Time, Linda and Foreshadowing. The lyrics that fit into the innocence and youth category are: “Few bob in your pocket” At the start of the song, the children are fifteen. They all have money to spend. This could be construed as ironic, because Mickey comes from a poor background, so he literally would only have a “few bob”. Edward’s family is rich, so he might have a lot of spending money. The phrase “Young, free and innocent,” is repeated throughout, slowly becoming more ironic and sarcastic. “Haven’t got a care,” This adds to the image of innocence.

It is foreshadowing later, when the boys’ heads, especially Mickey’s, will be full of worries and doubts. “Lambs in spring,” creates images of innocence. After spring, the lambs are slaughtered, so this can be interpreted as ominous. “But leave them alone, let them go and play,” says the Narrator, referring to the previous line. It feels almost as if he is playing with us, stringing out their future, prolonging the time until their deaths. This adds to the idea of him being fate. “The radio’s singing dreams,” This line is there to show that the children were living in a kind of alternate reality.

“You can’t understand how living could be anything other than a dream,” This adds to the idea of innocence and naivety. We feel sorry for the characters at this point, because they are so weak and helpless. The lyrics that fit into the Time category are: “Paradise,” This refers to the Garden of Eden, and how it was eternal, until woman corrupted it. This could be construed as a reference to Linda tearing them apart. “Switches off the chippy light,” The children are moths, and have always had a light to follow, someone to tell them what to do.

Now there is no light to go to, they must make there own choice. A light going out can also mean death – another reference to the inevitability of the twin’s deaths. “Midnight hour, at seventeen,” Where midnight is the pinnacle of the night, seventeen is the pinnacle of the boy’s lives. It is nearly the dawn of their death day. This quote also has echoes of a modern Faustian pact (Faust made a pact with the devil, which came at midnight to take his soul) the midnight hour is also linked to witches, and the story of Cinderella. The lyrics that refer to Linda are: “Girl in the middle,” She is torn between the two boys, in a tug of war that they do not realise is happening yet. “With your friends, with her,” This demonstrates that their friendship has been replaced with love for Linda. “Her” dehumanises Linda, so she becomes a device instead of a full character. It suggests that if it was not Linda, someone else would take her place, and the inevitable chain of events would carry on. It adds to the feeling of fate. The lyrics that are foreshadowing are: “You’re innocent, immortal,” This is ironic because we know that the twins will die. 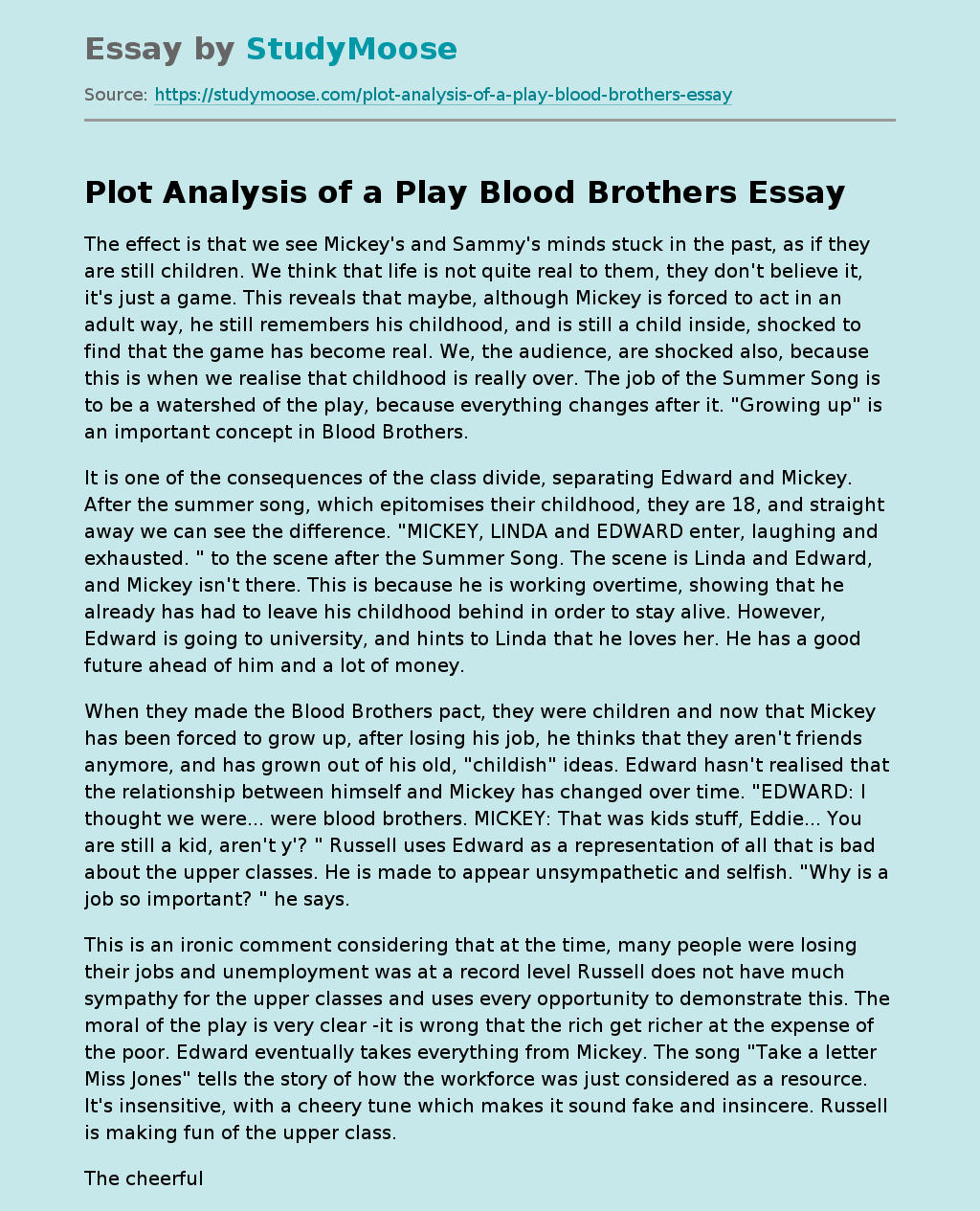