India is an agrarian country and around 60% of its people directly or indirectly depend upon agriculture. Agriculture in India is often attributed as gambling with monsoons because of its almost exclusive dependency on precipitation from monsoons. The failure of these monsoons can lead to a series of droughts, lack of better prices, and exploitation of the farmers by middlemen, all of which have led to a series of suicides committed by farmers across India. Things have always been bleak for the Indian farmer.

Don't use plagiarized sources. Get your custom essay on
“ Plight of Indian Farmers ”
Get custom paper
NEW! smart matching with writer

Here the term ‘farmer’ is used to describe the agriculturists with very small land holdings or no land ownership at all. The policies of the government and the often-lackadaisical attitude of the bureaucracy are responsible for the sorry plight of the farmer. Even the so-called ‘Green Revolution’ was successful only in patches. Not many small farmers could reap the benefits of the technology that required large tracts of land and lot of money.

The policy makers ignored the need for creating infrastructural facilities like irrigation and storage and not to mention the transport facilities.

Proficient in: If I Were A Farmer

Some of the main causes of the farmers’ mass suicide is due to absence of adequate social support infrastructure at the level of the village and district, uncertainty of agricultural enterprise in India, indebtedness of farmers, rising costs of cultivation, plummeting prices of farm commodities, lack of credit for small farmers, relative absence of irrigation facilities, repeated crop failures. India is transforming rapidly into a primarily urban, industrial society with industry as its main source of income; which is why the government and society remains unconcerned about the condition of the countryside.

Moreover, a downturn in the urban economy pushes a large number of distressed non-farmers to try their hand at cultivation; in the absence of any responsible counseling either from the government or society there were many farmers who did not know how to survive in the changing economy. Such stresses pushed many into a corner where suicide became the only option for them.

The problems that plagued the farmers 15 years ago are still glaringly present today: There is little credit available. What is available is very expensive. There is no advice on how best to conduct agriculture operations. Income through farming is not enough to meet even the minimum needs of a farming family. Support systems like free health facilities from the government are virtually non-existent. Non availability of timely credit has been a major drawback for the agricultural sector of India. In a country which relies mostly on agriculture, constant endeavors are needed to see that rural and agricultural credit facilities are enhanced with time. As a part of these efforts, agricultural credit cards got introduced in the agricultural lending system. Similarly cash credit facility was also being offered by many banks.

However, a major shortfall in these schemes remained the fact that they were concentrated mainly to the niche segment. The farmers lying in the higher end of the pyramid received access to these schemes while the marginal and small ones still remained unprivileged. The farmers’ problems should be assessed against the background of rural economy and the marketing of agricultural products. In almost all other economic transactions, those who produce the goods have the right to decide the market price of the product. But farm prices are not fixed on the basis of cost production of seeds, fertilizers, pesticides, water and other in-puts, besides electricity and manual labour. Farm products are thrown into the market with the result that their price-structure collapses with market fluctuations. When markets are flooded with farm products, prices come down and a scarcity means the rise of prices. The scarcity is artificially created by middlemen and merchants.

That is why traders of farm products get rich, while farmers remain poor. Traders get bank credit facilities, while farm credit is restricted to crop valuation which is not only uncertain, but considered at a low level by bankers who ascertain the farmers’ credit limit. Agriculture is not a sector for bank loans, and hence land assets are not considered for loan limits. The farmers are so neglected and exploited that, in times of crisis, they either have to get themselves trapped by private moneylenders or commit suicide. More than 17,500 farmers a year killed themselves between 2002 and 2006, according to experts who have analyzed government statistics. In 2006, the state of Maharashtra, with 4,453 farmers’ suicides accounted for over a quarter of the all-India total of 17,060. According to government data, over 5,000 farmers committed suicide between 2005-2009 in Maharashtra, while 1,313 cases were reported by Andhra Pradesh between 2005 and 2007.

In Karnataka the number stood at 1,003, for the period 2005 – 2009. In the last four years, cases there were about 905 cases in Kerala, 387 in Gujarat, 75 in Punjab and 26 in Tamil Nadu. In April 2009, the state of Chhattisgarh reported that 1,500 farmers committed suicide due to debt and crop failure. Farmers often have to take loans from money lenders because of a lack of alternatives, and if the crops fail, they are left with no choice but to commit suicide. The problem is that the Indian government has no plan to subsidize or compensate for farmer’s losses if he fails to compete in the global market or to survive global market fluctuations. Unless their plight is duly assessed, adequate credit facilities are given, and compensation packages finalized, it would be difficult for farmers to survive in any market, particularly under the present rural conditions. The rural people consisting of 70% (including farmers, artisans, fishermen, 93% Tribal’s, 86% Scheduled castes, nomads etc.) do not have the basic facilities as secured by the organized sectors.

These people living in Villages of Bharat are illiterate, do not have basic facilities of health & education neither regular income nor growth. The reason for the lack of facilities is due to lopsided policies adopted in the past after Liberalization process. The leaders as well as Intellectuals have become immune to the problems confronted by rural people. There is a general feeling among farmers of being ‘left behind’ in large parts of rural India. The widening disparity in per capita income between farm and other than farm sector, the very slow rate of growth in agriculture, the declining profitability, extremely weak social security arrangements, weakening family and community based mechanism of social protection, lack of employment opportunities etc., and the rising aspirations are building up social unrest which, if not arrested, could lead to threats to internal peace and security. The worsening cost-risk-return structure of farming, the low and stagnating income of farmers and the huge and widening income divide between farmers and non-farmers are the main deterrents.

The Indian farmers have always been at the receiving end since Independence. Their hard toil fetched them nothing except fake assurances from the rulers of this nation. It’s sad and unfortunate that people who are indispensable for the growth of nation have been left to their fate. This is quite evident from the suicide cases in Andhra and other parts of the country including West Bengal. In states like UP, middlemen and Mandi officials ensure that the farmers turn into object of grief. The need of the hour is implementation of schemes introduced by the government. This can take place effectively if the village panchayats are provided more power to execute them in smooth manner.

Today bureaucratic set-ups eat into their advantages. Again farmers need to be equipped with latest technological accessories that enhance the prospects of better output and thus make their contribution more prominent in the global economy. Better results could be attained if information centers having state-of-the -art facilities are set-up inside each village that shed light on issues related with farmers. They form the backbone of the nation and so it becomes imperative for us to be conscious of their needs.

Recommendations to reduce the plight of Indian Farmers

* Agricultural subsidies should not be stopped but it should be done in an efficient manner so that the needed farmers or poor farmers who are not financially stable can get these facilities and their situation can be improved. Government should have all the details of farmers and on the basis of that list distribution should be done. They should provide subsidies category wise. Improvement in the agricultural sector is one step towards the development of our country. * Comprehensive insurance safety net

* Revamping of extension services in lines with e-choupals; and dissemination of information such as agricultural prices and methods of low-cost organic farming. * Fundamental policy changes to factor in the fluctuating production cost in the minimum Support Price mechanism. * To integrate surface and groundwater irrigation schemes and integrate the line departments in order that the schemes are implemented efficiently. * Policy changes to focus on farmers rather than seed and fertilizer corporations and set up of a commission with statutory powers that takes decisions on issues such as genetic modification technology and its impact on Indian agriculture, agriculture pricing policy and cropping pattern. 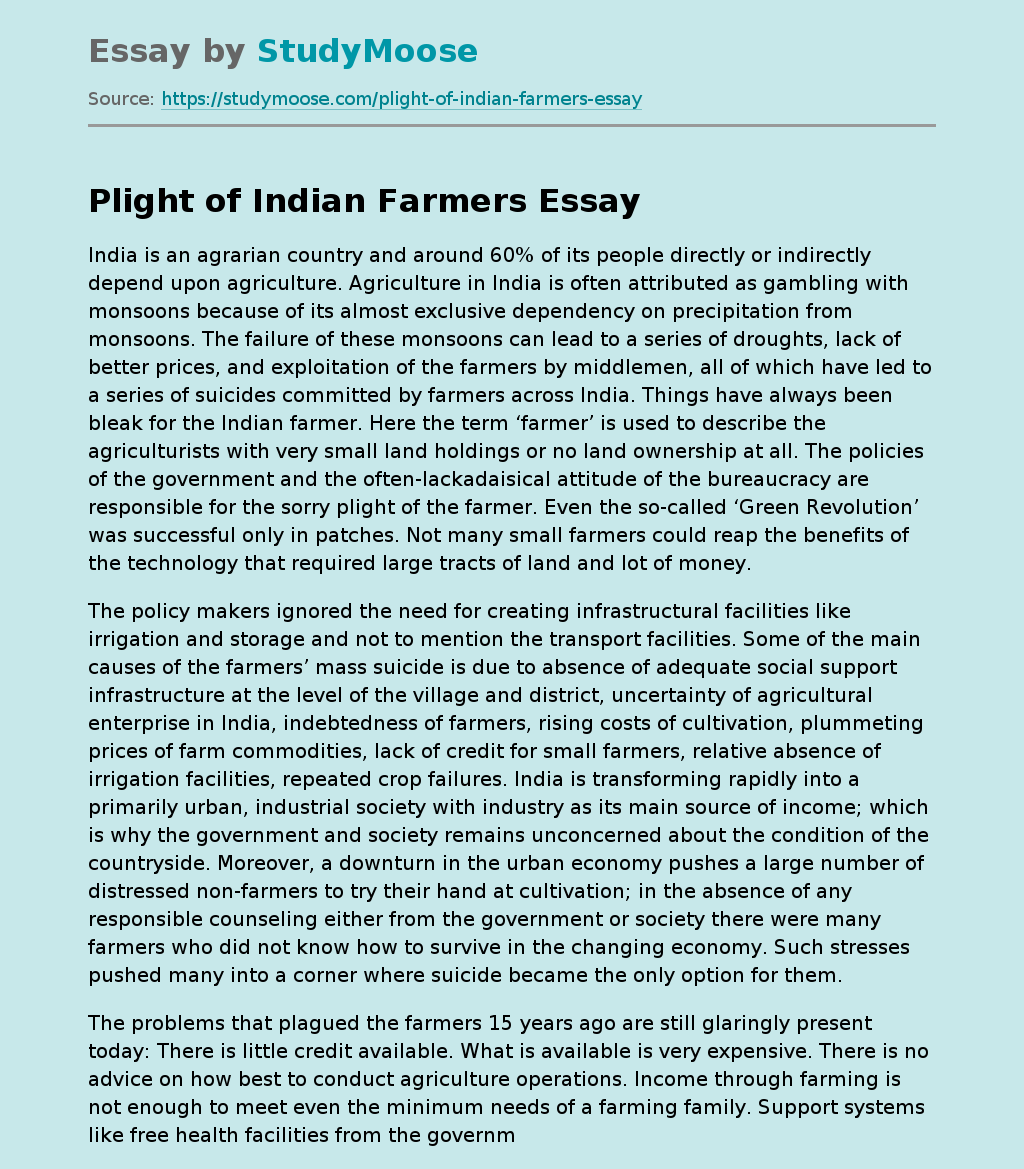