Although PlayStation 3 are both great systems, PlayStation 3 the better buy. Both consoles have awesome features such as 3D motion gaming, unlimited music, and online play. Only one of these consoles can be consider the best of the best. The PlayStation 3 is by far the superior console with its Blu-ray integration, amazing cell processor, and rechargeable wireless controller.

The first difference is The PlayStation Network is free, whereas Xbox Live Gold charges a gamer yearly to use their services. After making one PlayStation purchase, a gamer does not have to worry about internet again.

Don't use plagiarized sources. Get your custom essay on
“ PlayStation 3 VS Xbox 360 ”
Get custom paper
NEW! smart matching with writer

A person gets all the same features on PlayStation 3 for $250 dollars, plus forty extra gigabytes of memory. However, Xbox 360 costs $249 dollars plus fifty dollars for a one-year membership. Not including the fee of fifty dollars a person does not obtain the full features because they always have to worry about renewing their membership.

Another difference is the PlayStation 3 controllers are rechargeable, while Xbox 360 controllers need batteries or other attachments.

Last but not least, PlayStation 3 graphics seem more defined, but Xbox 360 graphics are often unrealistic and cartoonish. The PlayStation has Blu-ray player for better graphics and watching movies.

It’s very crisp and smooth because of the quick cell processor. On the other hand, Xbox 360 does not have Blu-ray capabilities and its processor is much slower. That makes the game’s and movie’s resolution much lower. The PlayStation 3 has faster and more efficient technologies and that leads to better gaming experiences.

Finally, with the free network that the PlayStation 3 has it will save a person more money than Xbox 360. Also having the rechargeable wireless controller with the PlayStation 3 a gamer is able to have more gameplay without worrying about paying for batteries or extra attachments. Last, even though Xbox 360 has an unlimited amount of games, its graphics are not as realistic as the PlayStation 3. In conclusion, the PlayStation 3 is by far the better gaming system to buy. 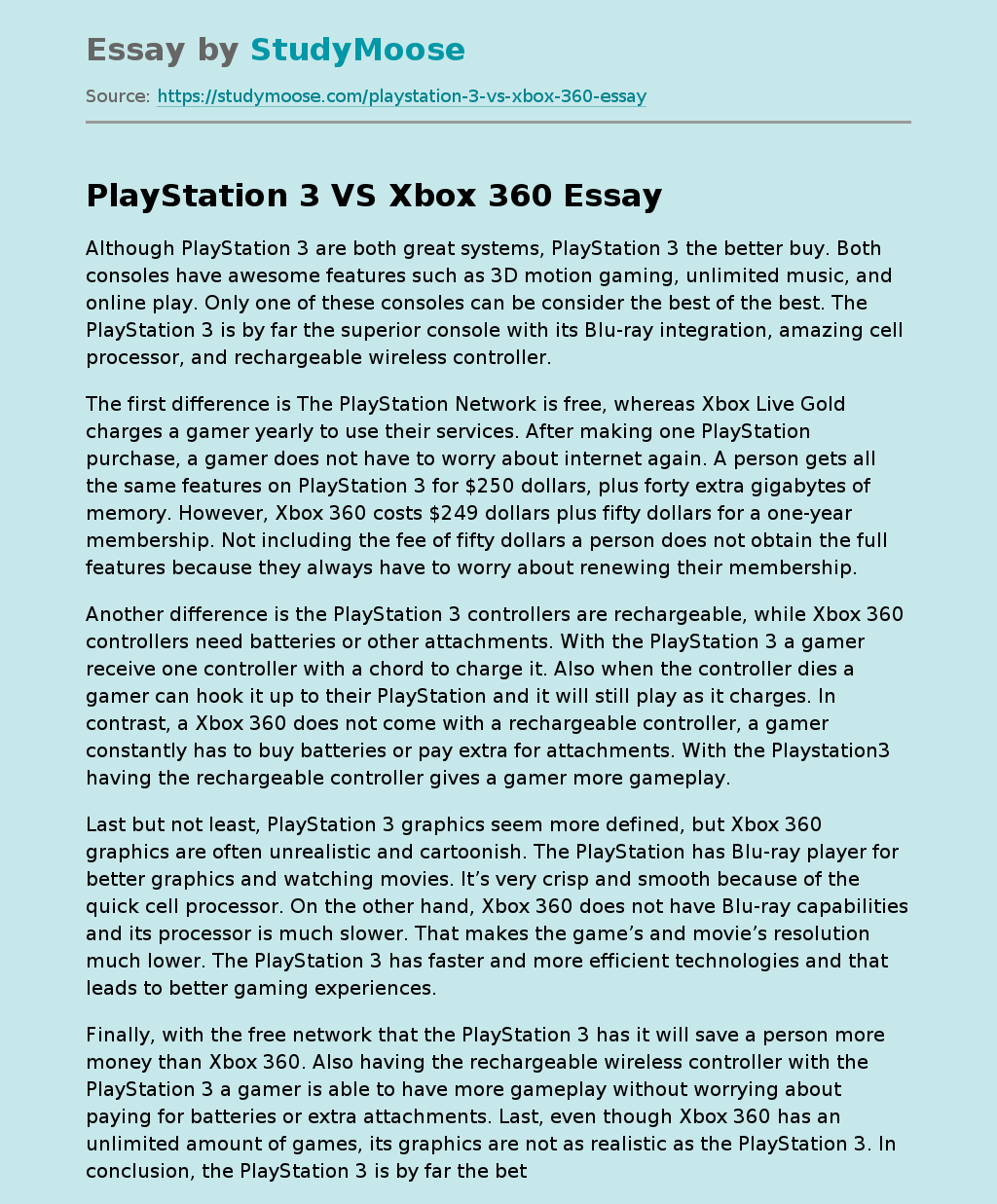