In the Republic, Plato sets up a framework to help us establish what the four virtues are, and their relationship between them to both the city and the soul. According to Plato, the four virtues are wisdom, courage, moderation, and justice. There are three classes within the city: guardians, auxiliaries, and artisans; and three parts within the soul include intellect, high-spirited, and appetitive. By understanding the different classes of the city or parts of the soul, one will be able to appreciate how the virtues attribute to each one specifically.

Don't use plagiarized sources. Get your custom essay on
“ Plato’s 4 Virtues ”
Get custom paper
NEW! smart matching with writer

Book II of the Republic opens with Plato’s two brothers, both who want to know which is the better life to live: the just or the unjust. First, Socrates wants to know, “what justice and injustice are and what power each itself has when it’s by itself in the soul” (Cahn 130). One needs to understand what the soul is before one can talk about virtue because the relationship between the soul and virtue is excellence.

This sets up the foundation that the structure of the soul and the city are similar in relation to the four virtues.

In order for Socrates to accomplish this, he needs to examine the larger one first, the city, representing the ontological. Then, he is going to examine the smaller one, the soul, representing the epistemological. The establishment of each of these will display how the two mirror off one another, allowing the relationship between the city and the soul to become visible. Plato sets out the depiction that the city comes into being because not everyone is self-sufficient, but rather everyone needs different things in order to survive.

Each person in the city is going to have one specific function to perform, which establishes the proper order of a just city contains three different classes: the guardians, the auxiliaries, and the artisans. In having established this ideal city, one can determine that it is completely good, therefore, it should be seen as wise, courageous, moderate, and just. Each one of the classes established in the city relates to a particular virtue. For the guardian class, “a whole city established according to nature would be wise because of the smallest class and part in it, namely, the governing or ruling one.

And to this class, which seems to be by nature the smallest, belongs a share of the knowledge that alone among all the other kinds of knowledge is to be called wisdom” (Cahn 144). The intellect the guardians possess, allows the city to have good judgment and be considered wise by the people, since so few have this ability. This helps them pass legislation allowing all of the other classes to be in harmony with one another bringing the city to a state of unity.

For the auxiliary class, “the city is courageous, then, because of a part of itself that has the power to preserve through everything its belief about what things are to be feared” (Cahn 144). The auxiliaries demonstrate this kind of preservation about what is to be feared and what is not to be feared and under no circumstances do they abandon their beliefs because of pains, pleasures, desires, or fears. As they fear the destruction of the city and anything that will bring it about, “this power to preserve through everything the correct and law-inculcated belief about what is to be feared and what isn’t is what I call courage” (Cahn 145).

Their determination to remain dedicated to being courageous will lead to justice within the city. For the artisan class, “moderation spreads throughout the whole. It makes the weakest, the strongest, and those in between…all sing the same song together. And this unanimity, this agreement between the naturally worse and the naturally better as to which of the two is to rule both in the city and in each one, is rightly called moderation” (Cahn 146).

By willingly accepting the dictates of the guardians by not objecting the legislation they pass, they are putting the city in a state of harmony. It can clearly be seen that only when each class is properly performing its particular role within the city, will justice be able to prevail. For Plato, “Justice, I think, is exactly what we said must be established throughout the city when we were founding it…everyone must practice one of the occupations in the city for which he is naturally best suited” (Cahn 147).

This only happens when the city is not in a state of internal conflict with itself allowing the highest principle, good, to be seen; making it the most unified, therefore being just. Since the proper order of the city has now been established, it is time to turn inward to one’s soul to determine where justice and injustice might lie, and what the difference is between the two. Plato believes, “if an individual has these same three parts in his soul, we will expect him to be correctly called by the same names as the city if he has the same conditions in them” (Cahn 148).

Now that Plato has found the four virtues within the larger environment of the city, he now wants to investigate their relationship to the smaller environment of the soul. The first part of the soul that calculates is considered rational by having the ability to make good judgment, known as its intellect. The second part of the soul that desires certain indulgences and pleasures; such as, food, drink, and sex, is considered irrational and is known as its appetitive part.

The third part of the soul is known as the high-spirited, which allows a person to get angry by giving way to the use of their emotions. The appetite of one’s soul draws a person towards things, while the intellect of one’s soul pushes that person away, thus creating two different parts. The high-spirited is, “a third thing in the soul that is by nature the helper of the rational part” (Cahn 151). Originally, the spirited part was thought of as being appetitive; however, when there is a civil war within one’s soul, the anger of the high-spirit allies with the rational part of the soul.

Now that the three different parts of the soul have been identified, it is clear that, “the same number and the same kinds of classes as are in the city are also in the soul of each individual…Therefore, it necessarily follows that the individual is wise in the same way and in the same part of himself as the city” (Cahn 151-152). Accordingly, the intellect of the soul should rule, as the guardian class does in the city because they both display the virtue of wisdom allowing them to exercise understanding on behalf of the whole soul and city.

Similarly, the high-spirit of the soul should use anger, as the auxiliary class does in the city because they both demonstrate the virtue of courage allowing them to maintain proper order and harmony needed to establish justice. When the two parts of the soul and the city work together, the virtue of moderation is exhibited; because the soul’s appetitive part and city’s artisan class will be working together to maintain a state of unity. As seen with the city, justice will only emerge in the soul when each of the three parts are properly ordered and in a state of harmony with one another.

In the city, the guardians and auxiliaries exist in order to control and direct the artisan class; while in the soul, the intellect and high-spirit exist in order to rule over the appetites of the individual. Justice in the city and soul are related to one another because, “in truth justice is, it seems, something of this sort…binds together those parts and any others there may be in between, and from having been many things he becomes entirely one, moderate and harmonious” (Cahn 153).

When an individual is acting justly, then they are being true to the three parts of their soul, allowing the virtue of justice to surface. When each of the three classes in the city are properly performing their roles, then is the virtue of justice displayed. Plato describes justice as the perfect harmony between the parts both within the soul and within the city as the best possible combination to illustrate all four of the virtues. 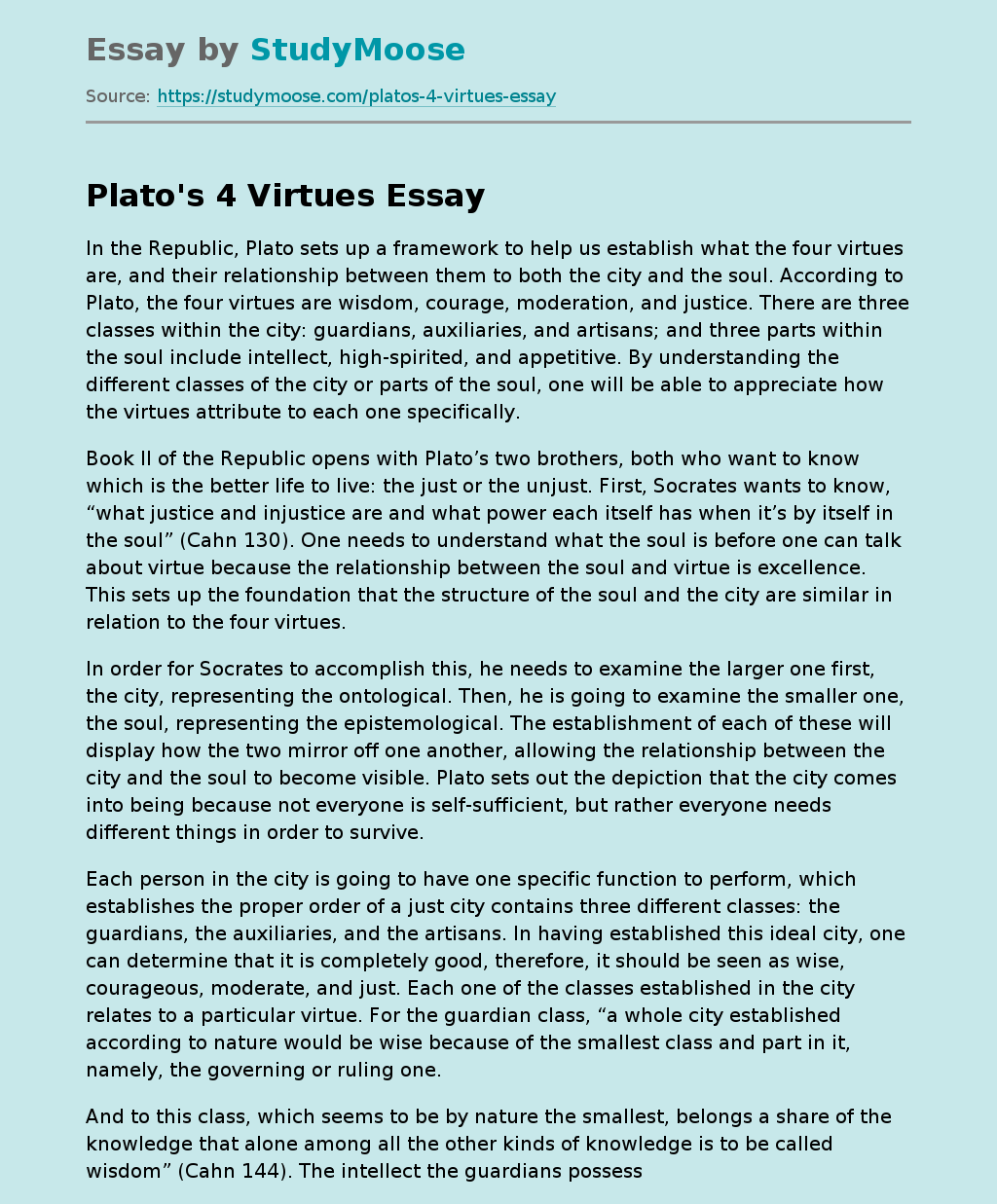