Working and living conditions in the 1800s were bad for both plantation workers and factory workers had it particularly bad. Although there were many similarities in their lives, there were many differences as well. Nonetheless both jobs were very hard work. The lives of both groups were very much alike. Both worked long hard hours and did hard physical labor.

The working conditions were harsh and unsafe in factories and on plantations. Solomon Northrup said that “when the moon is full, the often times labor till the middle of the night” and in factories worked from sunrise to sunset.

Don't use plagiarized sources. Get your custom essay on
“ Plantation Laborers vs Industrial Workers ”
Get custom paper
NEW! smart matching with writer

Both had to work very long hours, they also were both treated very unfairly. Solomon Northrup also speaks about how the slaves were only allowed practice religions on Sabbath days and were only fed cold bacon. And Rev William Scoresby showed through his writing that factories weren’t fair for everyone. There were many more similarities in their lives but as well as similarities there were many differences.

There were many different groups of people who worked in factories in the 1800s like immigrants and young girls. They worked long hard hours in very unsafe conditions in factories up in the north. In the regulations for employees in the Lewiston Mills it says except for workers under age 16 “are considered as agreeing to labor as many hours each day, and for each and every day’s work, as the Company may require, not exceeding eleven hours a day” the time table of the Lowell Mils start work at 6:30AM and finish work at 6:30PM so they worked 11-12 hour days in the factories.

That means they spent 50% or their time in these factories, also the factories were not very safe.

The industrial revolution began in the 1820s but they didn’t begin implementing safety regulations until decades afterwards. Many of the workers were very poor, they weren’t paid very much. There was immigrant towns set up, where many groups of people from the same place lived together. Many workers were also children; some were orphans who were forced to work in the factories. Although industrial laborers didn’t have easy lives, you can’t quite compare it to the life of a plantation worker. Most people who worked on plantations were slaves. These people weren’t treated as people, more so property. Basically, the entire economic system of the south was on their backs. Slaves were unpaid and ill-treated; they had no rights, and were barely protected by the law. These people belonged to someone else.

They worked long hours from sun up to sun down, and sometimes longer. In Twelve Years A Slave by Solomon Northrup he describes how the overseers beat the slaves and that “They do not dare to stop even stop at dinner time, nor return to the quarters, however late it be, until the order to halt is given by the driver…” meaning they do not stop working no matter how late it may be until the overseer says to stop. Slaves were also not allowed to practice religion at any time other than Saturday nights and Sunday mornings, not any other time in the week. They little to none of our constitution “God-given” rights; they were not free to assemble whenever they chose or even to practice their own religions.

They had to get a pass from their master to leave the masters land or enter another land. They lived in quarters designated by the master on his land. They lived in large groups and were watched by overseers. Slaves weren’t considered people; they were considered property and received no pay. Industrial laborers who although had things considerably bad did not have it quite as bad as slaves. There are many differences in the lives of industrial workers and plantation laborers; like working long hard hours in unsafe conditions. But although there were similarities there were more differences between the two. Both groups didn’t have easy lives, but plantation laborers (slaves) had it arguably worse. 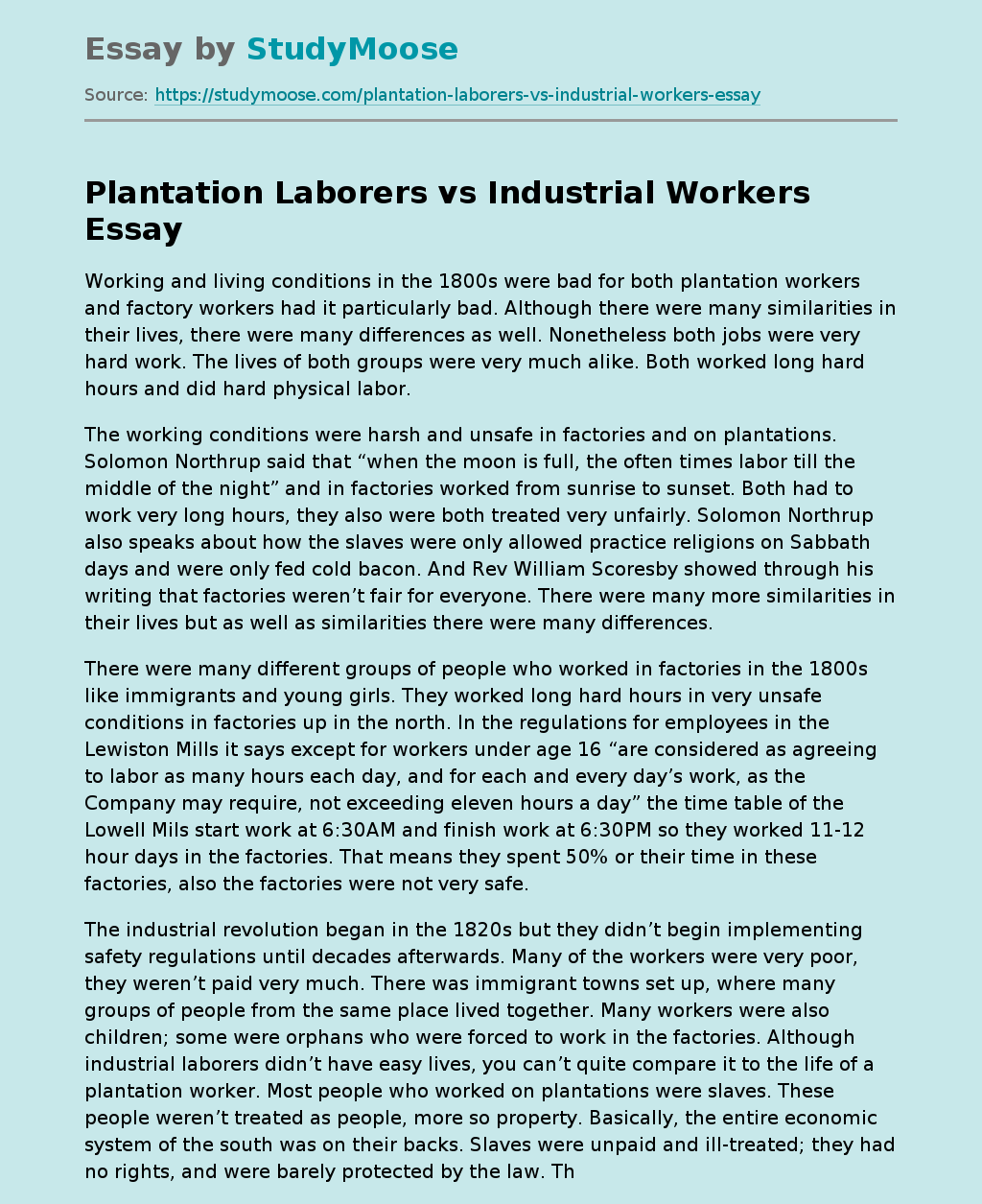