Don't use plagiarized sources. Get your custom essay on
“ Plant Tissue Culture ”
Get custom paper
NEW! smart matching with writer

•The production of multiples of plants in the absence of seeds or necessary pollinators to produce seeds. •The regeneration of whole plants from plant cells that have been genetically modified. •The production of plants in sterile containers that allows them to be moved with greatly reduced chances of transmitting diseases, pests, and pathogens. •The production of plants from seeds that otherwise have very low chances of germinating and growing, i.e.: orchids and nepenthes. •To clean particular plants of viral and other infections and to quickly multiply these plants as ‘cleaned stock’ for horticulture and agriculture.

Plant tissue culture relies on the fact that many plant cells have the ability to regenerate a whole plant (totipotency). Single cells, plant cells without cell walls (protoplasts), pieces of leaves, or (less commonly) roots can often be used to generate a new plant on culture media given the required nutrients and plant hormones.

Living plant materials from the environment are naturally contaminated on their surfaces (and sometimes interiors) with microorganisms, so surface sterilization of starting material (explants) in chemical solutions (usually sodium or calcium hypochlorite or mercuric chloride) is required. Mercuric chloride is seldom used as a plant sterilant today, unless other sterilizing agents are found to be ineffective, as it is dangerous to use, and is difficult to dispose of. Explants are then usually placed on the surface of a solid culture medium, but are sometimes placed directly into a liquid medium, particularly when cell suspension cultures are desired. Solid and liquid media are generally composed of inorganic salts plus a few organic nutrients, vitamins and plant hormones. Solid media are prepared from liquid media with the addition of a gelling agent, usually purified agar.

The composition of the medium, particularly the plant hormones and the nitrogen source (nitrate versus ammonium salts or amino acids) have profound effects on the morphology of the tissues that grow from the initial explant. For example, an excess of auxin will often result in a proliferation of roots, while an excess of cytokinin may yield shoots. A balance of both auxin and cytokinin will often produce an unorganised growth of cells, or callus, but the morphology of the outgrowth will depend on the plant species as well as the medium composition. As cultures grow, pieces are typically sliced off and transferred to new media (subcultured) to allow for growth or to alter the morphology of the culture. The skill and experience of the tissue culturist are important in judging which pieces to culture and which to discard. As shoots emerge from a culture, they may be sliced off and rooted with auxin to produce plantlets which, when mature, can be transferred to potting soil for further growth in the greenhouse as normal plants.

The tissue obtained from the plant to culture is called an explant. Based on work with certain model systems, particularly tobacco, it has often been claimed that a totipotent explant can be grown from any part of the plant. However, this concept has been vitiated in practice. In many species explants of various organs vary in their rates of growth and regeneration, while some do not grow at all. The choice of explant material also determines if the plantlets developed via tissue culture are haploid or diploid. Also the risk of microbial contamination is increased with inappropriate explants. Thus it is very important that an appropriate choice of explant be made prior to tissue culture. The specific differences in the regeneration potential of different organs and explants have various explanations.

The significant factors include differences in the stage of the cells in the cell cycle, the availability of or ability to transport endogenous growth regulators, and the metabolic capabilities of the cells. The most commonly used tissue explants are the meristematic ends of the plants like the stem tip, auxiliary bud tip and root tip. These tissues have high rates of cell division and either concentrate or produce required growth regulating substances including auxins and cytokinins. The pathways through which whole plants are regenerated from cells and tissues or explants such as meristems broadly fall into three types: 1.The method in which explants that include a meristem (viz. the shoot tips or nodes) are grown on appropriate media supplemented with plant growth regulators to induce proliferation of multiple shoots, followed by rooting of the excised shoots to regenerate whole plants,

2.The method in which totipotency of cells is realized in the form of de novo organogenesis, either directly in the form of induction of shoot meristems on the explants or indirectly via a callus (unorganised mass of cells resulting from proliferation of cells of the explant) and plants are regenerated through induction of roots on the resultant shoots, 3.Somatic embryogenesis, in which asexual adventive embryos (comparable to zygotic embryos in their structure and development) are induced directly on explants or indirectly through a callus phase. The first method involving the meristems and induction of multiple shoots is the preferred method for the micropropagation industry since the risks of somaclonal variation (genetic variation induced in tissue culture) are minimal when compared to the other two methods. Somatic embryogenesis is a method that has the potential to be several times higher in multiplication rates and is amenable to handling in liquid culture systems like bioreactors. Some explants, like the root tip, are hard to isolate and are contaminated with soil microflora that become problematic during the tissue culture process.

Certain soil microflora can form tight associations with the root systems, or even grow within the root. Soil particles bound to roots are difficult to remove without injury to the roots that then allows microbial attack. These associated microflora will generally overgrow the tissue culture medium before there is significant growth of plant tissue. Aerial (above soil) explants are also rich in undesirable microflora. However, they are more easily removed from the explant by gentle rinsing, and the remainder usually can be killed by surface sterilization. Most of the surface microflora do not form tight associations with the plant tissue.

Such associations can usually be found by visual inspection as a mosaic, de-colorization or localized necrosis on the surface of the explant. An alternative for obtaining uncontaminated explants is to take explants from seedlings which are aseptically grown from surface-sterilized seeds. The hard surface of the seed is less permeable to penetration of harsh surface sterilizing agents, such as hypochlorite, so the acceptable conditions of sterilization used for seeds can be much more stringent than for vegetative tissues. Tissue cultured plants are clones. If the original mother plant used to produce the first explants is susceptible to a pathogen or environmental condition, the entire crop would be susceptible to the same problem. Conversely, any positive traits would remain within the line also.

Plant tissue culture is used widely in plant science; it also has a number of commercial applications. Applications include: •Micropropagation is widely used in forestry and in floriculture. Micropropagation can also be used to conserve rare or endangered plant species.[2] •A plant breeder may use tissue culture to screen cells rather than plants for advantageous characters, e.g. herbicide resistance/tolerance. •Large-scale growth of plant cells in liquid culture in bioreactors for production of valuable compounds, like plant-derived secondary metabolites and recombinant proteins used as biopharmaceuticals.[3] •To cross distantly related species by protoplast fusion and regeneration of the novel hybrid. •To cross-pollinate distantly related species and then tissue culture the resulting embryo which would otherwise normally die (Embryo Rescue).

•For production of doubled monoploid (dihaploid) plants from haploid cultures to achieve homozygous lines more rapidly in breeding programmes, usually by treatment with colchicine which causes doubling of the chromosome number. •As a tissue for transformation, followed by either short-term testing of genetic constructs or regeneration of transgenic plants. •Certain techniques such as meristem tip culture can be used to produce clean plant material from virused stock, such as potatoes and many species of soft fruit. •Micropropagation using meristem and shoot culture to produce large numbers of identical individuals. •Production of identical sterile hybrid species can be obtained.

Although some growers and nurseries have their own labs for propagating plants by the technique of tissue culture, a number of independent laboratories provide custom propagation services. The Plant Tissue Culture Information Exchange lists many commercial tissue culture labs. Since plant tissue culture is a very labour intensive process, this would be an important factor in determining which plants would be commercially viable to propagate in a laboratory. 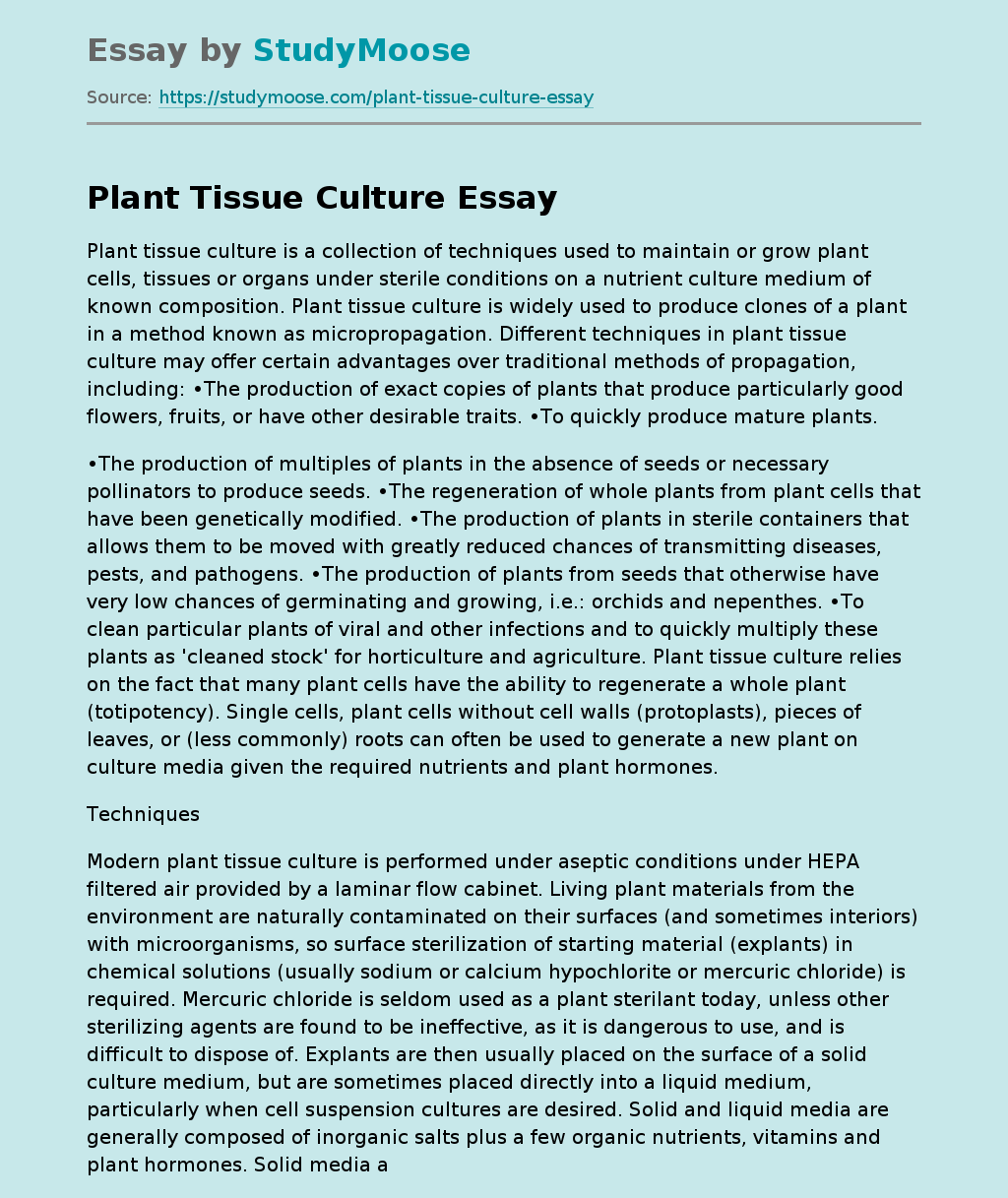