Planned parenthood is a luxury to the new generation. When our parents had children, it was not a decision; it was a moral “duty” to society. To further analyze the individual factors of planned parenthood you must draw on the larger religious, social, and economic factors that guide your individual decisions (Mills, 1959). If one considers the broad social factors that shape, influence, and allow individual choices, you are using what C. Wright Mill’s called the Sociological Imagination (Appelbaum and Chambliss, 1997).

Don't use plagiarized sources. Get your custom essay on
“ Planned Parenthood vs Moral Duty ”
Get custom paper
NEW! smart matching with writer

The insight provided by the Sociological Imagination brings new understanding to this particular event, the planning of parenthood.

The choice to bare children was never a topic for conversation in past generations. Religion as an institution had greater influence than it does in modern society. Families of the past were expected to follow religious teaching and were manipulated by the sociological expectations of the family definition. Birth control and abortion were “taboo” and social norms demonstrated the influence of religion in society.

Nowadays abortion clinics are common ground and “the pill” is the topic in high school settings. Due to today’s norms, most people are not following the old religious standards of “go forth and multiply”; they have new wants and desires.

Religious beliefs that were the core of cultural values became second to scientific research and renovation. The focus of society shifted from the unknown and unexplained to the known and scientifically proven. Technology and medicine modernized sociological institutions; what was “taboo” became the social norm. The possibility of genetic testing, the development of the birth control pill, and government legislation of “pro-choice” allow individuals to have choices on parenthood.

Technology, which we cannot control as individuals, creates individualism, free will, and personal disclosure from what was once considered a social “duty” or basic “human nature.”

Social roles of men and women have a deep impact on personal decisions as well. Society expected men and women to get married, have children, and live a healthy life as husband and wife. Parenthood was not an option; it was a task in fulfilling your “social role” (Appelbaum and Chambliss, 1997). Men were “bread winners” and women “house makers” united by the family institution. The role of men was to provide the family with comfortable living resources and protect them from harm. They were rough, tough, and above all, had the education to succeed in the workforce.

Women were the heart of the family, the nurtures, the caregivers, the mothers and wives. They were neglected the educational resources needed to succeed in the workforce and the bare thought of a working mother was absurd. Now, with the high standards of family life, women are likely to work in order to provide additional family income.

Economically, a child is a large strain on finances. This has a large impact on the decision to bear a child. In the past, large families were normal because children were also providers of income; therefore, a large family meant economic security. The family worked to fulfill family needs not family wants. Working-class families did not have the economic opportunity of extra disposable income; they did not have “luxuries”. The foundation of the family was hard work and unity. Women worked hard in the kitchen, men in the field, and children with household tasks. Parenthood was not an option; it was an extra source of income and survival.

Social structures have given way to personal choice. Planned parenthood is the result of structural renovation. One can now sit down and discuss the meaning of being a parent without feeling society’s pressure to have a child. The Sociological Imagination enables us to “grasp at the relationship between our lives as individuals and the larger forces that help shape them” (Appelbaum, 2001). It is the interplay of larger social forces that shape the choices individuals make. The decision to bare a child is the result of social-historical renovation that provides us with the notion that we have some control over our fate. Planned parenthood is now an individual choice, not a sociological expectation. 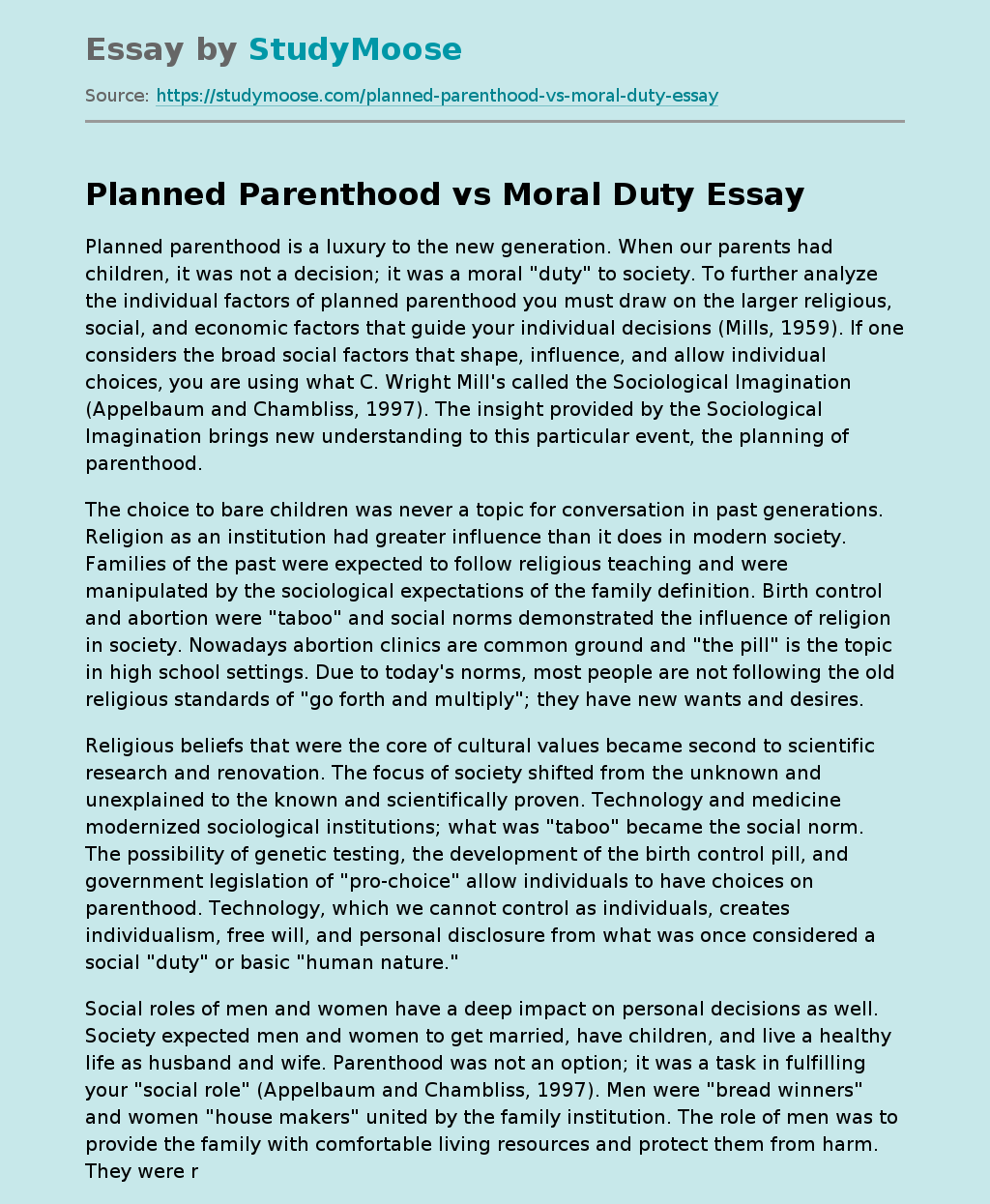