Many people believe that Planned Parenthood is just a clinic for abortions, but in reality it serves a much greater purpose. For nearly 100 years, Planned Parenthood has worked to improve women’s health and safety and to advance the right and ability of individuals to manage his or her fertility regardless of income, race, ethnicity, sexual orientation or age. They provide several safe contraception methods, reduce the spread of sexually transmitted infections through testing and treatment, and screen for cervical and other cancers.

Don't use plagiarized sources. Get your custom essay on
“ Planned Parenthood ”
Get custom paper
NEW! smart matching with writer

Planned Parenthood has more than 7 million activists, supporters and donors working for women’s health and safety and fundamental reproductive rights. Their services help prevent more than 684,000 unintended pregnancies each year. Planned Parenthood was founded in 1916 by Margaret Sanger originally as a clinic for poor, immigrant women to obtain contraceptive advice.

Then, in 1923, Sanger began her research on contraception and incorporated the American Birth Control League that later merged to become Planned Parenthood Federation of America, Inc. In these early years of PPFA, contraception and information about family planning was illegal, but in 1936, Sanger won the liberalization of the laws that kept women from learning about preventing pregnancy.

Later in the 1960’s, Planned Parenthood became a respected and powerful voice in the movement for women’s rights, increased access to birth control, and the development of the pill and IUD. In May of 1966, the FDA approves that sale of oral pills.

Now for many years, Planned Parenthood had fought against laws that would prevent low-income patients from receiving medical information, counseling, or referrals for abortion services and had several million dollars of their funding for birth control, maternal care and HIV/AIDS prevention cut.

After decades of fighting, in 2006, Cecile Richards takes the position as President of Planned Parenthood Federation of America and has led the organization to its current successes by expanding advocacy for access to health care and ensured that Planned Parenthood played a pivotal role in shaping health care coverage and services for women under the Affordable Care Act.

Planned Parenthood is the leading provider in high quality, affordable health care for women, men and adolescents worldwide. Pelvic exams, pap tests, and screenings for breast cancer are some of the main vital health care needs for women. The health center can also test and treat a urinary tract infection and many other common pelvic infections. Planned Parenthood has provided nearly 4.5 million tests and treatments for sexually transmitted infections, including HIV. They will provide testing and information for infections such as gonorrhea, hepatitis B, herpes, chlamydia, syphilis, and crabs. Contraception is another main service Planned Parenthood provides. Many types of birth control that are offered are, the pill, the Depo-Provera shot, NuvaRing, Implanon, or an IUD. They also offer emergency contraception called the morning after pill, commonly taken when protection isn’t used or when forgetting to take birth control correctly.

Men’s sexual health services are also available at their health centers. They provide checkups for reproductive or sexual health problems and have colon, prostate and testicular cancer screenings. Contraception for men includes, giving them condoms and preforming vasectomies as well. Planned Parenthood has seven million activists, supporters, and donors nationwide. The Planned Parenthood Federation of America of advocates is a group of more than 400 leaders in the arts and entertainment community united by their personal integrity and commitment to the Planned Parenthood mission. These members promote awareness of reproductive health and rights issues to help increase support by participating in a national or local Planned Parenthood event, writing articles, lending their photo and name to help raise money for Planned Parenthood and lobbying elected officials.

The Action fund is another organization that plays and important part in supporting Planned Parenthood Federation of America by engaging in educational and electoral activity, including public education campaigns, mass organizing, and legislative advocacy. They’re a non-profit organization that encourages the passage of legislation to protect family planning and reproductive freedom. These affiliates provide educational programs to more than one million young people and adults each year. Planned Parenthood has gone through many battles to get to their successes today, and now has 74 independent local affiliates that operate more than 750 health centers throughout the United States. They are a trusted health care provider, informed educator, passionate advocate, and global partner helping similar organizations around the world. 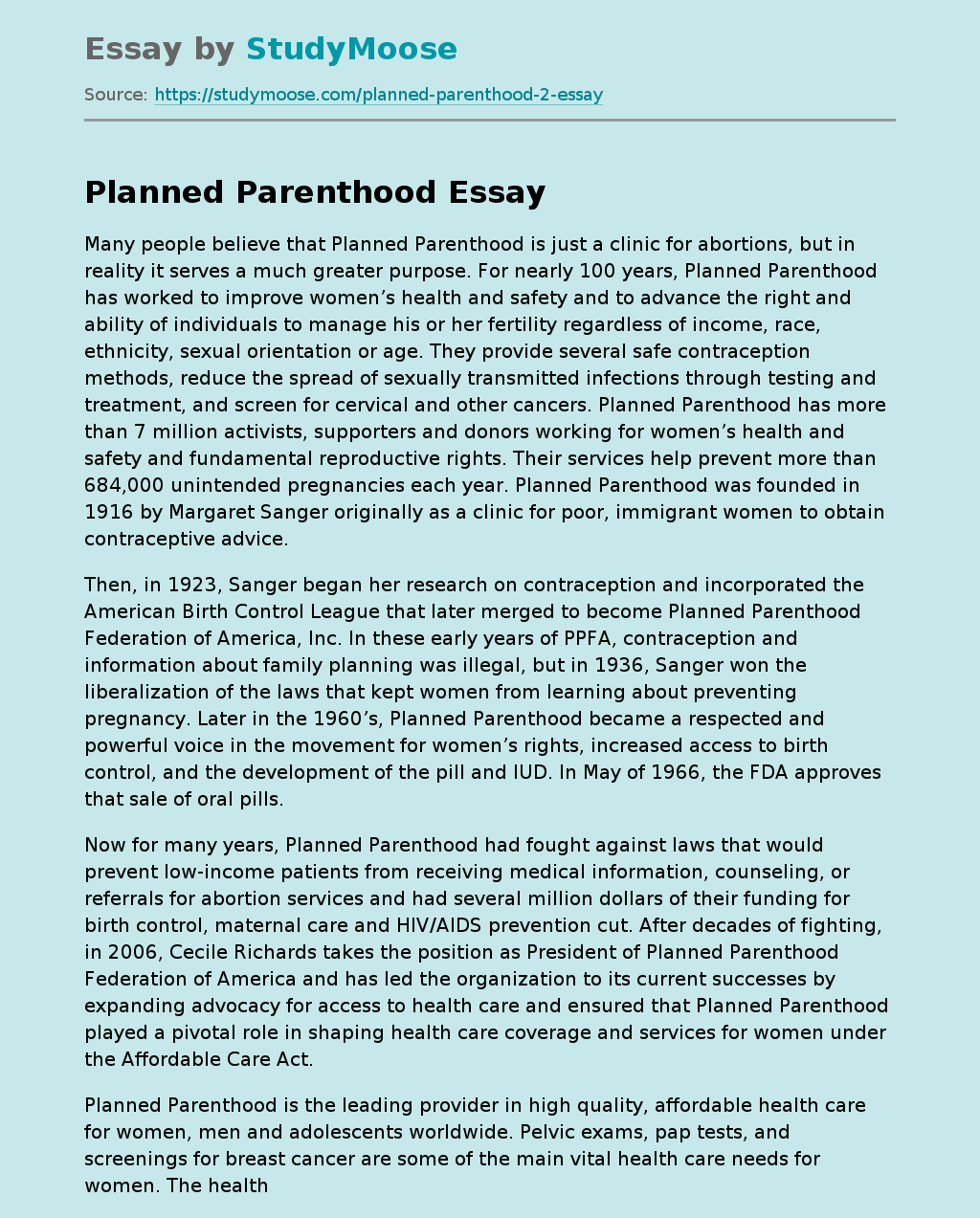