Our solar system consists of the sun and nine planets. Mercury is the closest planet to the sun. Mercury was named after the Roman God of Commerce and Thievery. It might have gotten its name because of the way it quickly appears and disappears from Earth’s view.

Mercury is the second smallest planet in the solar system; Pluto is the only planet that is smaller. Earth’s diameter is about 7,200, while tiny Mercury has less than half of that size, about 3,000 miles in diameter.

Don't use plagiarized sources. Get your custom essay on
“ Planet Mercury ”
Get custom paper
NEW! smart matching with writer

Mercury, a planet, is smaller than Ganymede, a satellite revolving around Jupiter.

One of the features of Mercury distinguishing it from other planets is that it has a different orbit loop. Whereas the orbit of most planets has the shape of a circle, the Mercury’s orbit has the shape of ellipse that looks like a stretched out circle. For that reason, the distance from Mercury to the sun varies from about 27 to 41 million miles. Mercury races around the sun faster than any other planet.

A Mercurial year accounts only for 88 days, while our year on Earth comprises 365 days that is four times longer than of the Mercurial. We all know that it takes 24 hours or one day for Earth to make one complete rotation around its axis. For Mercury to make the same complete rotation, it will take as many as 59 Earth days!

Mercury for the most part is a rocky planet along with Earth and Venus. Mercury is made mostly of iron, with a thin rocky layer on it surface.

If you look at the model of Mercury, you will see many craters on its surface. The planet has been hit many times throughout its existence by asteroids and other flying objects. Those impacts resulted in a plenty of craters covering its surface. It is believed that likewise craters had covered all Earth at one time in the past. However, due to the erosion of soils, extremely changeable weather, and climate conditions, those craters had been leveled off.

Mercury has some interesting characteristics that make it unique. It is the closest planet to the sun, has ellipse orbit, resolves around the sun faster than any other planet, rotates very slowly, has the greatest temperature change, and almost no air. Also, those facts prove that life is impossible on Mercury. 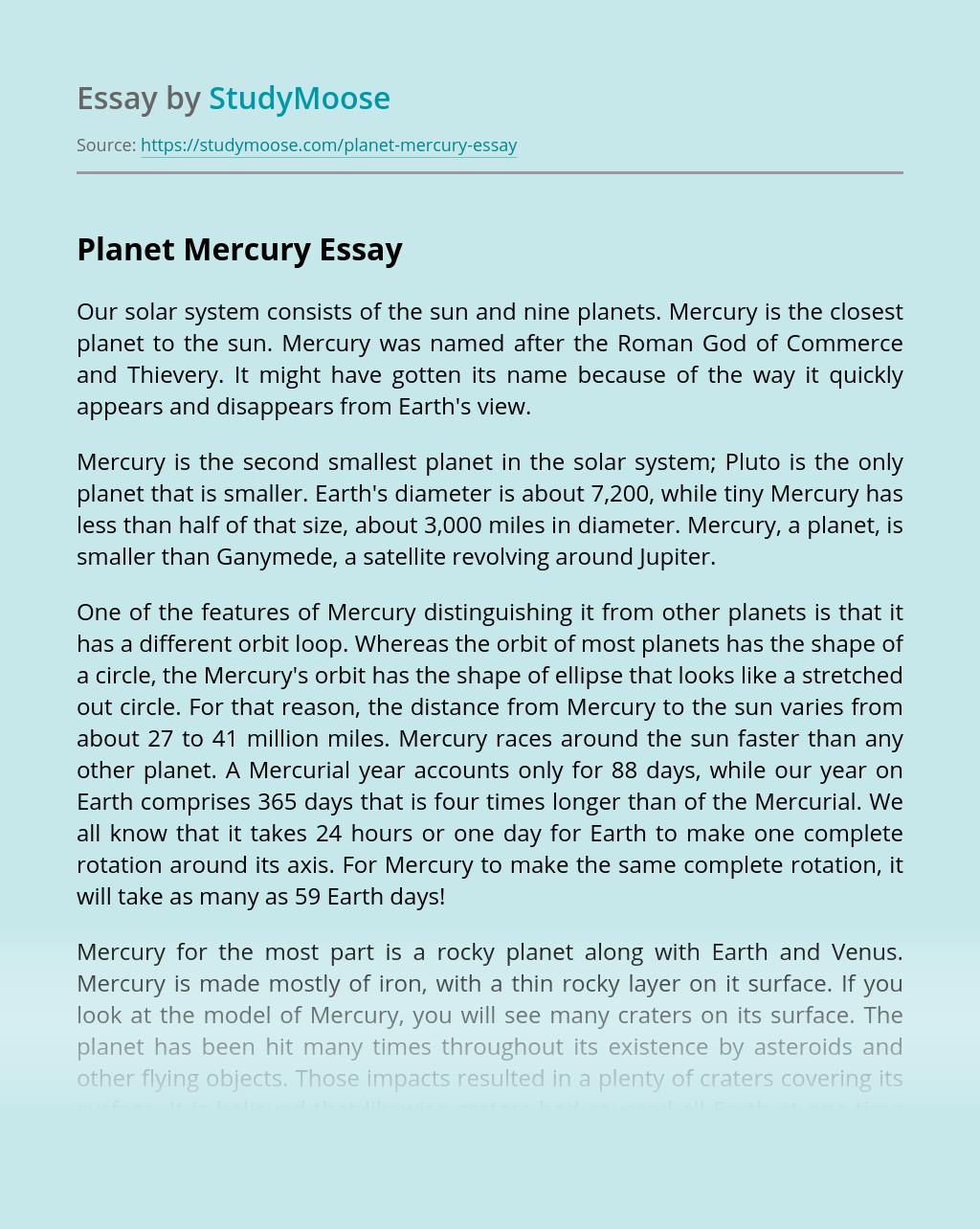