Throughout the article “The Pitfalls of Plastic Surgery” Camille Paglia in the Essay The pitfalls of plastic surgery the author states her opinion and views on the topic of Plastic Surgery she gives the reader for example the history of body modification and how it went from something not many people out of celebrities status had access to until the late 1990s-2002 where almost every major city has a plastic surgeon.

First I will start with her example on body modifications pre historic time and now.

Don't use plagiarized sources. Get your custom essay on
“ Pitfalls Of Plastic Surgery ”
Get custom paper
NEW! smart matching with writer

No one really knows which culture invented body modifications but we have many historical facts that show early people did it. For example Paglia stated that early tribal people would stretch there Necks to make them longer and some would even stretch the earlobes she states this type of ‘mutilation is in the eye of the beholder’’. Now Plastic surgery become very popular throughout the great era of the early 60’s when actor’s, actresses wanted a more youthful and refreshing look that makeup couldn’t achieve for them.

To achieve there goal the would have to travel to Brazil where plastic surgery was at its early stages of being legal. She states that these actors especially woman actresses felt the more older the were getting the more unattractive and that the act of plastic surgery would revise and beautify there nature. A Shimmering Illusion to be blind to there own natural beauty.

Secondly she gives the reader the Good and bad cause and effects of plastic surgery for example these celebrities that have had this surgery you see some of them on television with robotic or rubbery looking faces or hands due to unlicensed practitioners performing many of these operations and once the damage is done the people have to live with these bad body alterations especially Botox patients that have had bad or toxic chemicals put inside them.

Although, She states she isn’t against the idea of plastic surgery, she believes that the motives should be different; it should become more of an art. She also believes beauty is in the eye of the beholder. To conclude here is my Summary analysis of the writing The Pitfalls of Plastic Surgery by Paglia, Camille. 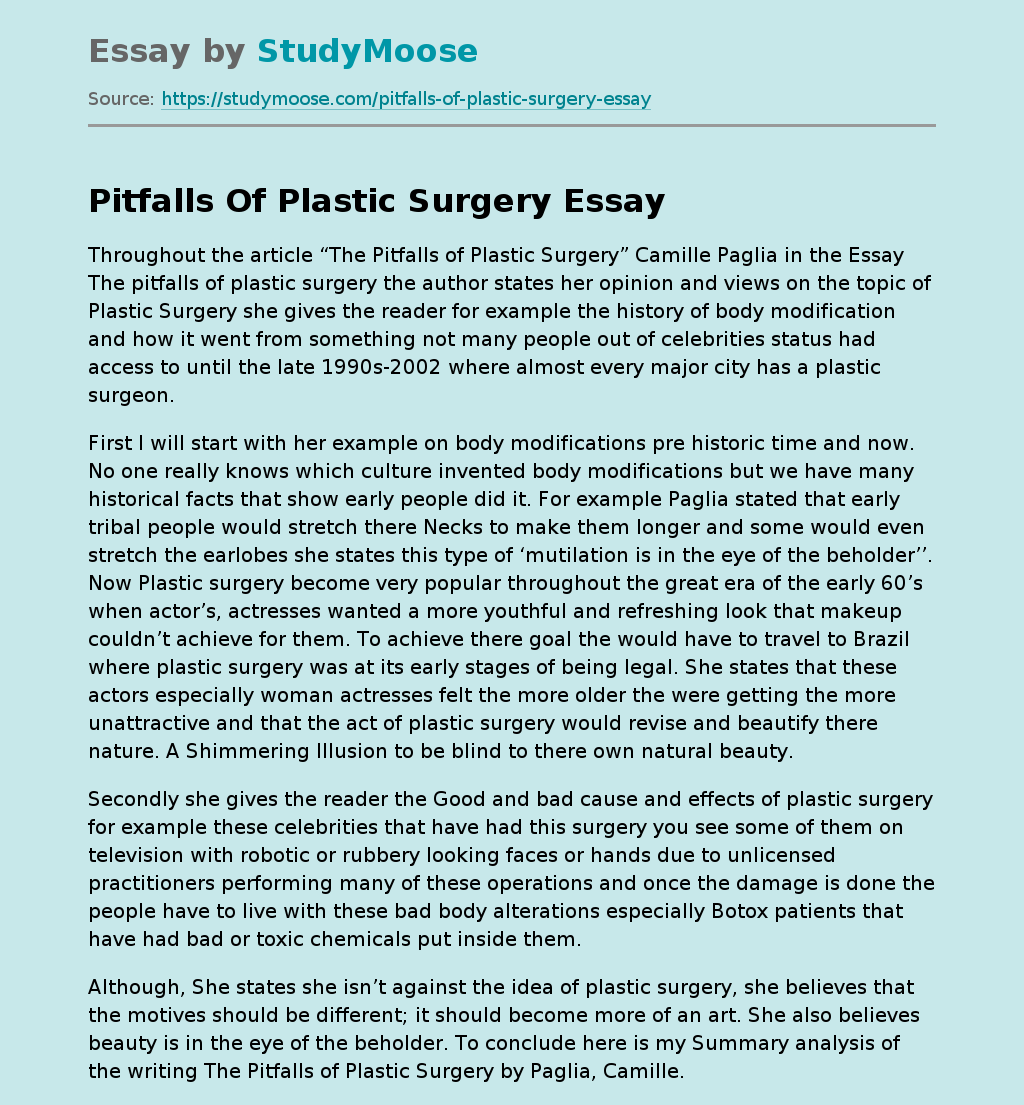