Has anyone ever come in contact with a pit bull and felt fear that you were going to be attacked or mauled? I bet at least some of you have. I to was one of those people who thought I was going to be attacked, But after I owned a few I thought differently. Pit Bulls are banned in some state and counties because the government feels that it is the breed’s aggressive behavior is a threat, instead of the owners who made them that way.

Don't use plagiarized sources. Get your custom essay on
“ Pit Bull Stereotyping ”
Get custom paper
NEW! smart matching with writer

The pit bull breed has the stereo-type as being aggressive, but that is not true for all pit bulls .

It is the way the dog was raised to be. Pit bulls are very loyal and caring pets if raised right. Let me tell you about my first encounter with a pit bull/boxer mix. I went to the local animal shelter to get a dog for my children, I was going to surprise them a dog, so I actually adopted a Rottweiler, who by the way the shelter volunteers recommended would be a good dog because she passed all the tests they did on her for behavioral issues.

Well I got her home and my kids came home from school.

She was good with my daughters but went to attack my son, so needless to say she went back to the shelter which by the way broke my heart I don’t like seeing any animal in a shelter. So I brought my children with me the second time and we went through the shelter again.

We saw this pit bull/ boxer mix he was so full of energy. And my son wanted him. We were told the he showed sign of aggression and not good with children, and was set to be euthanized the following day because they felt he would not make a good pet for anyone. I asked if we could take him in a pen to get to know him.

The volunteer was against us doing it but let us anyway. We ended up adopting him and he never showed any sign of aggression toward us or any of our other animals that we had. All he gave us was love and loyalty for 10 yrs. Since my first recue I have rescued three more pit bulls. Walking into a shelter and seeing the animal’s sad eyes looking up at you pleading to take them home and just love them is so heartbreaking. The joy of rescuing a pit bull from a shelter is endless. The love you get from a rescued pit bull is undeniably awesome.

To come home from a long day and have them there waiting for you, tail wagging and all the kissed in the world, makes a bad day turn great. The pit bull stereo type maybe true for some but it is not the breed it is the owners that make them that way. When you buy a pet you acknowledge that they are your responsibility. If the pet destroyed someone’s property then it is the owners fault, not the dogs. However that is not true for biting. For some reason the government feels that it is a whole breeds fault if it is only a couple of dogs bite humans. The government should punish the owners instead of the dogs.

Some owners just let their dogs run around and do whatever the dog wants. Then when the dog gets into trouble the owner does not take responsibility for the dog. So instead of the government banning the whole breed they should focus on the owners. They should ban certain people from owning a Pit Bull. If they did that then they would realize that it is not the breeds fault, but it is the owners fault. The government could also force owners to have a beware of dog sign, this way people would know that there was a dog around that could potentially be harmful.

I believe any dog would be violent if he were raised to be. If a dog was mistreated or poorly socialized, then the dog would bite a human if one were to come near. If a person were to treat a dog with respect and care, then the dog would be friendly, or at least he wouldn’t be violent. If each owner took the time to treat his or her dog with respect, then there would be a lot fewer people getting bitten. However, some people like to raise violent dogs. They like to raise dogs to fight each other. Those people should be severely punished.

They should not be allowed to have another dog until they have proven that they can be good owners whether it be a pit bull or any other breed. Pit bulls are very loyal loving dogs, and are being punished for something that is not their fault. Many Pit Bulls are being raised to be aggressive. They do not know that what they are doing is wrong. They are just trying to survive and please their owners. Also a Pit Bull could be about 20 different breeds of dogs. So it is unfair to blame it on all of them when one breed may be a lot calmer than the others. The owners of the Pit Bulls should be punished instead of the breed. 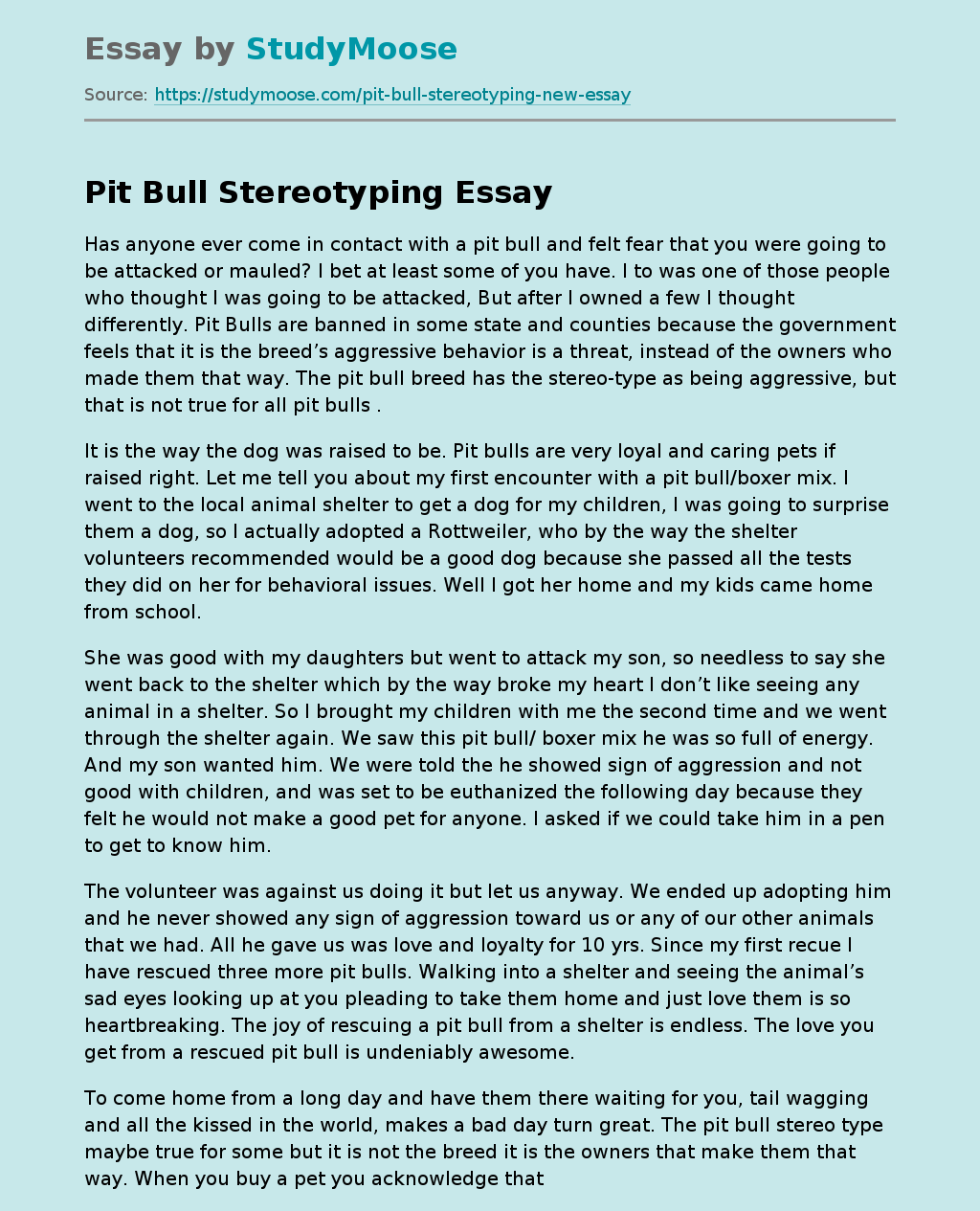