Late one afternoon in November 1987, Tom Wathen, sole owner and CEO of California Plant Protection (CPP), sat in his office staring at two financing plans. Wathen was trying to decide whether or not he should increase his $85 million bid to purchase Pinkerton’s—the legendary security guard firm—from its current owner, American Brands.

On the previous day, Wathen had been told by Morgan Stanley, American Brands’ investment banker, that his bid of $85 million had been rejected and that nothing less than $100 million would be accepted.

While Wathen was elated at still being in the deal, he had a problem. CPP’s board of directors had reluctantly approved the earlier $85 million bid and were sure to balk at a $100 million bid. Wathen desperately wanted to buy Pinkerton’s, but was not sure how much it was worth or how to finance it. Wathen knew he had to act now or miss this unprecedented growth opportunity and probably his last chance to be one of the industry’s biggest players.

The security guard industry had two segments: (1) proprietary guards and (2) contract guards. While both types of guards performed similar services, a proprietary guard was an employee on the payroll of a nonsecurity firm. Contract guards were “rented” from specialist suppliers like Pinkerton’s, CPP, Wackenhut, and Baker Industries. The historical growth of the contract guard segment of the industry was due in part to companies concluding that they gained operating flexibility by contracting out their security needs as opposed to managing their own security operations.

By late 1987, security guard services was a $10 billion industry growing at 6% a year. But the industry was also mature, fragmented, and price-competitive. As a result there was an ongoing trend toward consolidation at the expense of smaller, local guard companies whose employees were often imperfectly screened and poorly trained.

The security guard industry began in 1850 when Allan Pinkerton founded the Pinkerton’s Detective Agency. The firm gained fame in the nineteenth century with its pursuit of such outlaws as Butch Cassidy and the Sundance Kid. In the film portrait of that pair, Paul Newman repeatedly asks Robert Redford, “Who are those guys?” Those “guys” were Pinkerton’s men and women. Pinkerton ran his firm until he died in 1884. The company was then headed by four generations of Pinkertons until the family’s reign ended in 1967 with the death of Robert Pinkerton. Adam S. Berger (MBA ’91), prepared this case under the supervision of Professor Scott P. Mason as the basis for class discussion rather than to illustrate either effective or ineffective handling of an administrative situation.

American Brands, the $5 billion consumer goods company—with brand names such as Lucky Strike cigarettes, Jim Beam bourbon, Master locks, and Titleist golf balls—purchased Pinkerton’s for $162 million in 1982. American Brands made the acquisition in order to expand the service side of its business and because it saw the Pinkerton’s brand name as a great addition to “a company of great brand names.” The Pinkerton family sold the company to American Brands because they felt the industry was becoming extremely price-competitive and therefore the company needed a strong parent to compete and grow. In 1987 Pinkerton’s was among the largest security guard firms in the United States, with sales over $400 million, 150 offices in the United States, Canada, and the United Kingdom, and a particular strength in the eastern United States. Exhibit 1 gives selected financial data for Pinkerton’s.

When Wathen bought CPP in 1963, the firm had 18 employees and revenues of $163,000. By 1987, Wathen had built CPP into a $250 million security guard company with 20,000 employees and 125 offices in 38 states and Canada. Exhibit 2 gives selected financial data for CPP. Wathen built CPP with his consummate marketing skills and the strategy of differentiating the firm with employee screening and continual training. CPP’s expansion was aided by the explosive growth of California’s economy and because the bigger, more established East Coast security guard firms had ignored the West Coast.

Wathen wanted to buy Pinkerton’s for several reasons. First, he had always had the goal of creating the largest firm in the security guard industry, and the acquisition of Pinkerton’s would put him in a virtual tie with Baker Industries—a subsidiary of Borg Warner and the largest provider of contract guard services. Secondly, Wathen had been convinced for some time that American Brands was mismanaging Pinkerton’s and destroying a great brand name with its pricing strategy. In October 1987, American Brands announced it had decided to sell Pinkerton’s because the security guard firm no longer fit into Brands’s long-range business strategy.

Upon this announcement, Jerry Brown, CPP’s secretary and general counsel, recalls, “Tom [Wathen] called me in and from that moment I knew he was going to do whatever it took to buy Pinkerton’s. Tom was always hung up on being the largest, and on Pinkerton’s name.” Morgan Stanley, an investment bank, was to represent American Brands in the sale and the bidding promised to be hotly contested. A task force of senior managers was quickly formed to prepare CPP’s bid which they knew, given the time pressures of the sale, would not have the benefit of adequate preparation.

The task force believed there were three ways CPP could create value by acquiring Pinkerton’s. The most obvious source of value would come from consolidating the operations of CPP and Pinkerton’s by eliminating common overhead expenses such as corporate headquarters, support staff, and redundant offices. Second, the task force believed that significant improvements could be made in the management of Pinkerton’s net working capital. The third source of value, and possibly a unique insight by Wathen and the CPP task force, was the Pinkerton’s name. They believed that, while the industry was highly price-competitive, the services of both Pinkerton’s and CPP could be successfully marketed under the Pinkerton’s name at a premium price. Specifically, the task force felt that even though higher prices could lead to reduced revenue, the resulting improvement in gross profit margins, due to the marketability of the Pinkerton’s name, would be sufficient to result in greater gross profits.

For example, the task force believed that a premium price strategy would definitely reduce Pinkerton’s revenues since that firm had acquired a significant amount of business since 1985 using a low-price/high market-share strategy. The new pricing strategy would result in Pinkerton’s revenues shrinking, in a smooth fashion, to 70% of their 1987 level by the end of 1990 and then growing at 5% a year thereafter. But the task force was uncertain in its estimate of the impact of the new strategy on profitability. They expected that the new pricing strategy would improve Pinkerton’s gross profit margins from 8.5% in 1988 to 9.0% in 1989, 9.5% in 1990, and 10.25% thereafter. The task force further expected the new strategy to produce higher margins for CPP, increasing the projected operating profit from CPP’s own business by $1.2 million in 1989, $1.5 million in 1990, $2.0 million in 1991, and $3 million in 1992.

This increase in CPP’s projected operating profit would be over and above that level that would otherwise have been anticipated in those years, and was expected to grow at 5% a year, in line with sales, beyond 1992. (Exhibit 3 gives a five-year forecast of CPP’s net income and cash flow assuming Pinkerton’s is not acquired). However, the task force realized there was a distinct possibility that the new pricing strategy would have no impact on CPP’s projected operating profits, and Pinkerton’s gross margins would improve to only 8.5% in 1988, 8.75% in 1989, 9.0% in 1990, and 9.5% thereafter. The task force was confident that, as a result of eliminating common overhead, Pinkerton’s operating expenses, as a percentage of sales, could be reduced to 6% in 1988, 5.9% in 1989, and 5.8% in 1990 and beyond. The task force was also confident that Pinkerton’s net plant and equipment could be reduced to 4% of sales and maintained at that percentage relationship for the foreseeable future.

The idea of CPP acquiring Pinkerton’s was not universally popular. Most of the investment banks and lenders contacted by CPP expressed negative feelings about the potential acquisition, citing inadequate cash flow and weak market conditions following the dramatic dislocation of the stock market in the previous month. However, a representative of Sutro & Co., a prominent West Coast investment bank, indicated he was “highly confident” he could get financing for the acquisition from either Manufacturers Hanover Trust Corporation or General Electric Credit Corporation. In addition, Wathen had some problems with CPP’s board of directors. For example, Berger thought there would be obvious synergies in merging the two businesses, but that there was not enough management depth at CPP capable of running the combined firms.

According to Berger, there was no COO, no CFO, no marketing manager, and nobody to handle the day-to-day details of operating a $650 million firm. The last thing CPP needed was growth, Berger argued. He felt the field people could handle a larger firm, but the corporate management could not. Nonetheless, the task force pressed on with their analysis of Pinkerton’s. In addition to current financial market conditions, the analysis took special notice of Wackenhut, the only publicly traded security guard firm. (See Exhibits 4 and 5.) Only 12 days after receiving the details of the sale from Morgan Stanley, and with the reluctant approval of his board, Wathen bid $85 million for Pinkerton’s.

Wathen did not receive a response to his bid for two weeks. Through his own network, Wathen knew another firm had bid more than CPP and that Morgan Stanley was negotiating with that firm. Wathen was disappointed that he might miss his last opportunity to be one of the biggest in the business. When Morgan Stanley finally called and told Wathen his $85 million bid was too low, and that nothing less than $100 million would be accepted, Wathen was elated that he had another chance to buy Pinkerton’s. But he suspected the reason Morgan Stanley had finally called him was that the other buyer had been unable to finance their higher bid.

In a last ditch effort to improve his bid for Pinkerton’s, Wathen asked his investment banker to determine the options for financing a $100 million bid. The banker responded with only two alternatives. The first alternative came from an investment firm who would provide both debt and equity financing. The debt, in the amount of $75 million, would have a seven-year maturity and an 11.5% interest rate. The loan principal would not be amortized prior to maturity, at which time the entire $75 million would come due. Finally, this debt would be a senior obligation and be backed by all the assets of the new combined firm.

The equity, in the amount of $25 million, would be provided in exchange for 45% of the equity in the new combined firm. The second alternative was a 100% debt financing offered by a bank. The bank would lend $100 million at the rate of 13.5% a year. The loan principal would be amortized at the rate of $5 million a year for six years, with a final payment of $70 million at the end of the seventh year. Again, this loan was collateralized by all of the assets of the new combined firm.

Under either financing alternative, Wathen was very concerned about the required debt service. The new combined firm’s nonpublic, as well as high-leverage, status could make any cash flow problems over the next five years highly problematic. The task force also reminded Wathen that a $100 million purchase price would result in the creation of good will on his balance sheet which would have to be amortized at the rate of $5 million per year for the next 10 years.1 Wathen sat in his office and prepared to make the biggest decision of his career.

As an entrepreneur and an experienced security guard executive, Wathen was sure Pinkerton’s was a good buy. However, he had routinely relied on his board and other advisers for financial advice. His board had reluctantly approved his earlier bid of $85 million and was sure to balk at a $100 million bid. How could he justify a $100 million bid for Pinkerton, particularly in light of his earlier bid of $85 million? And if he was successful in convincing the board, how was he going to finance the acquisition? 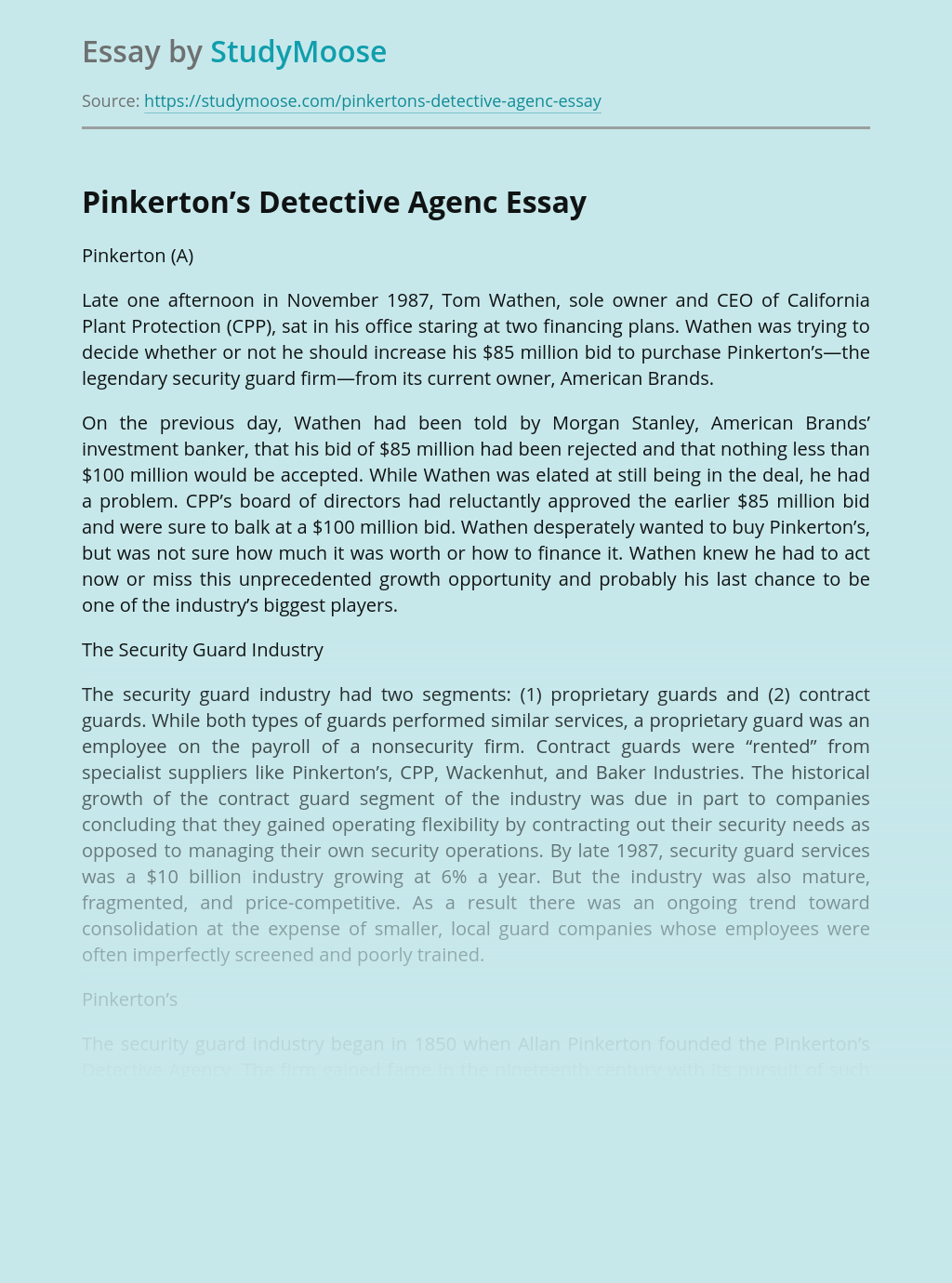