Pigeon Plague in Our Cities

In an opinion piece entitled ‘Pigeon Plague in Our Cities’, Jo Bonella uses a broad range of persuasive techniques in an attempt to persuade readers to accept his contention that a new program to stop pigeon feeding is needed to deal with a growing “pigeon plague”. Bonella firstly builds a very negative view of pigeons, describing the presence of these “pests” as a “plague” and pointing out that they were imported into Australia long ago for specific purposes, planting in readers’ minds the idea that they clearly do not belong in our cities now.

Turn in your highest-quality paper
Get a qualified writer to help you with
“ Pigeon Plague in Our Cities ”
Get high-quality paper
NEW! AI matching with writer

The association of pigeons – which many readers may first see as pleasant and harmless – with such ugly and undesirable things as cockroaches and rats works to dispel from the readers’ minds any thoughts that pigeons are not a problem requiring urgent action. Bonella emphasises the inconvenience and harm caused to innocent citizens by selecting words which have both strongly negative connotations and which also put a clear picture in the readers’ minds – “clogging”, “stumbling” and “slithering”.

Such images and associations evoke a feeling of anger and indignation in the reader, continuing to build a strong case against these “pests”, leading the reader to agree more and more with Bonella’s argument that we can no longer tolerate the presence of these filthy pests in our cities. The accompanying photograph works well in combination with this theme of a “plague” – lines of pigeons, dark and sinister and in a large threatening pack, are shown clogging the landscape, which resonates well with the point about the birds clogging gutters and footpaths.

Bonella then starts to replace mostly emotive techniques with more substantial evidence-based ones. By referring to the experience of the Swiss biologist, he makes an appeal to authority, leading the reader to accept the proposed idea to stop feeding pigeons because this proposal is endorsed by an expert who is affirming that the program has worked overseas.

The impressive statistics (25 to 8 thousand) are presented in such a way that they speak for themselves – the reader is unable to argue or disagree with such a clear and successful result. The reader is left with no alternative but to agree that the ‘stop feeding’ program should be adopted as soon as possible.

Pigeon Plague in Our Cities. (2016, Sep 15). Retrieved from https://studymoose.com/pigeon-plague-in-our-cities-essay 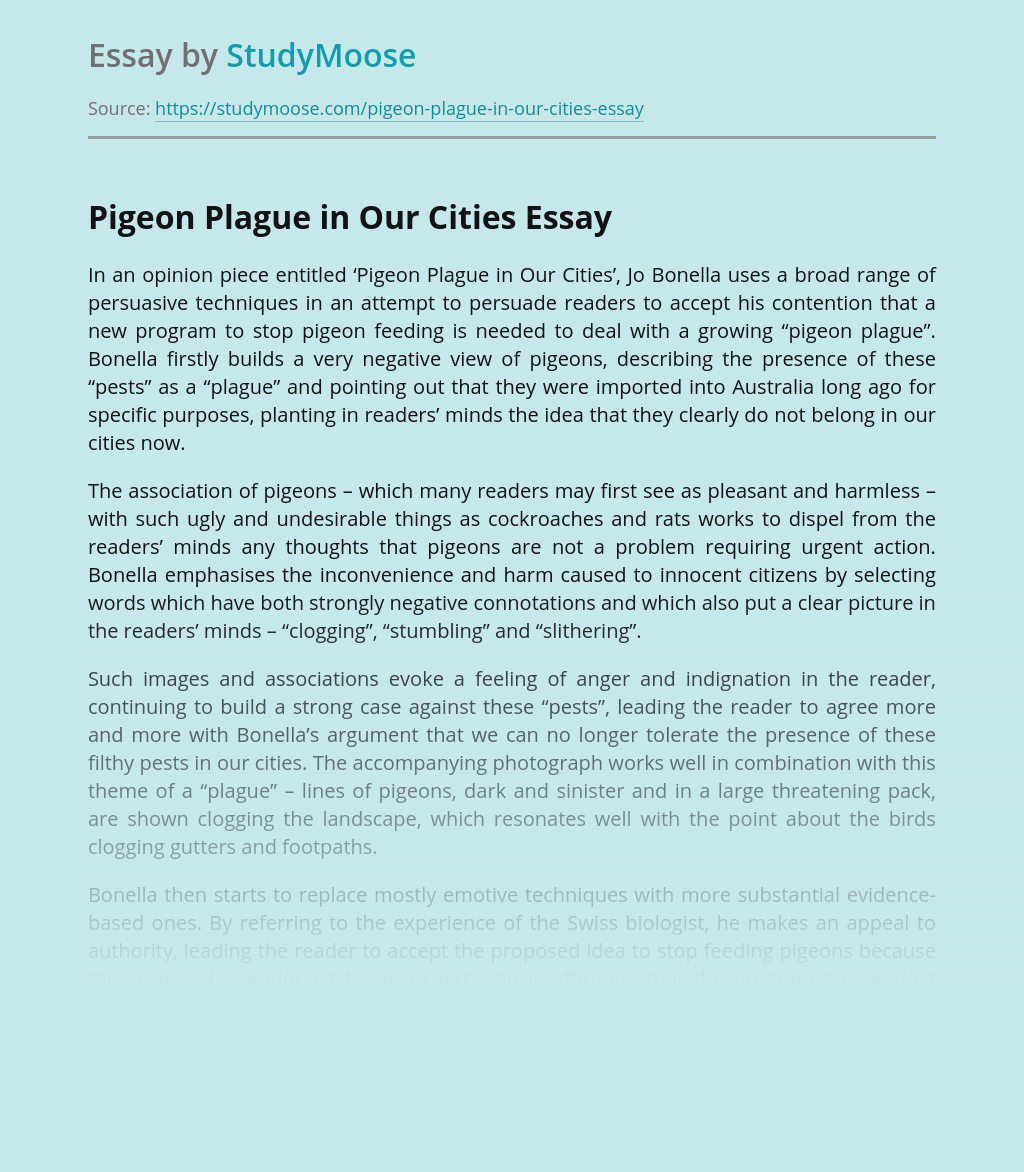 Turn in your highest-quality paper
Get a qualified writer to help you with
“ Pigeon Plague in Our Cities ”
Get high-quality paper
Helping students since 2015
Stay Safe, Stay Original