“The Crucible” as a piece of drama is structurally flawed. It reaches a climax in the trial scene and subsequently loses momentum. Discuss. “The Crucible” by Arthur Miller is a very powerful, dramatic and intense play. But, does it loose momentum after act 3? The trial scene, in Act 3, when tension reaches a climax, takes place in courtroom and shows the enormous hysteria of villagers created by the accusation of witchcraft. The drama is heightened by the off-stage reactions of townspeople, who roar in reaction to what they hear.

Don't use plagiarized sources. Get your custom essay on
“ Piece of drama ”
Get custom paper
NEW! smart matching with writer

This is a large public, spectacular scene, which concludes with Hale demanding the proceedings and after this the audience may see the play as less interesting. However, although Act 4 may seem less exciting, it has its own tension and drama. In Act 4 the audience can see highly dramatic such as when John Proctor talks with his wife, Elizabeth, or refuses to lie; he says “Because it is my name! Because I cannot have another in my life! Because I lie and sign myself to lies! ” It is a highly dramatic moment in act 4 only minutes before dramatic end, when Proctor is hanged.

Through the play Miller wants to send a ‘message’ to the audience. A message about truth, justice and standing for your beliefs. The author shows how lies can destroy society, when there is no justice. People like Deputy Governor Danforth and Judge Hathorne, who were supposed to find out the truth, believed in fraud and pretence. Miller shows in Act 4 how easy it is to carry on with false accusations and lies, but then how difficult it is to stop and admit you were mistaken, like Danforth, who in Act 4 realizes it might be pretence, but is afraid to lose his reputation and good name as a judge.

In the play Arthur Miller examines justice, which should be foundation for any society. The author shows the audience that there was not any justice in Salem’s legal system and it was a fundamental reason why there were so many people hanged or jailed. The audience can clearly see how the most important and powerful people of Salem like Danforth or Parris, treated the others when they were telling the truth and stood up for their beliefs even to death, like John Proctor and Rebecca Nurse.

The audience will also feel sympathy for three man, Francis Nurse, Giles Corey and John Proctor, who are trying to convince the court of the innocence of their wives. Giles is old and has to be “half-carried” to the court. “Though helpless sobs” he tries to explain that he accidentally caused his wife to be accused. The testimony of Francis and Proctor sounds clear and sincere in reply to the relentless questioning of Danforth and the hysterical interruptions of Parris.

Their simple statements “you are deceived” and “it were a pretence” are great contrast to Danforth’s thunderous claims ” I have seen people choked before my eyes by spirits; I have seen them stuck by pins and slashed by daggers”. His exaggerated and melodramatic language reminds the audience about McCarthyism when Americans were accusing each other of Pro-Communist beliefs. Many of Miller’s friends were being attacked as communists and in 1956, Miller himself was brought before the House of Un-American Activities Committee where he was found guilty of beliefs in communism.

The verdict was reversed in 1957 in an appeals court. Act 4 is important because it shows how the relentless legal system of Salem begins to crumble. After Act 3, when accusations grow, Marry is urged to faint and cannot; after Proctor’s “God’s dead” Danforth begins to doubt in the accusations. Townspeople don’t believe that the people condemned to hang were witches. Parris is an other man now; he is worried by the situation in Salem and that he can lose his ministry. Judge Hathorne says about Parris “I think, sometimes, the man has a mad look these days. ”

The situation in Salem is out of control now; “There be so many cows wanderin’ the highroads, now their masters are in the jails, and much disagreement who they will belong to now. ” ” There is a great contention, sir, about the cows. Contention make him weep. ” Parris, who used to be confident and was one of the more powerful and influential people in Salem is now frightened to go out at night “I dare not step outside at night! ” he says since he discovered a dagger “Tonight, when I open my door to leave my house- a dagger clattered to the ground”. This is an indication how Parris’ character changed through the play.

What’s more, in act 4 the audience hear “My niece, sir, my niece- I believe she has vanished”. Abigail and Mercy Lewis have gone and robbed Parris. His situation in now hopeless; he’d lost everything he cared about, money and reputation. Parris says there are the rumours about rebellion in Andover, but Danforth negates it: “There is no rebellion in Andover! “. “Andover have thrown out the court, they say, and will have no part of witchcraft. There be a fraction here, feeding on that news, and I tell you true, sir, I fear there will be a riot here”, Parris says to Danforth and Hathorne.

They are afraid, that the same situation can happen in Salem and they will lose their ministries and reputation. Parris asks for postponement of the hangings, to give the condemned people time to confess as ” un confessed and claiming innocence, doubts are multiplied, many honest people will weep for them, and our good purpose is lost in their tears. ” Danforth disagrees with delaying the hangings: “There will be no postponement”. This gives a feeling of urgency to the play and continues the feeling of panic which the audience witnessed in Act 3.

Also Hale asks for more time, he does believe the accused are innocent; “You must pardon them. They will not budge” but, again Danforth cannot agree. “I cannot pardon these when twelve is already hanged for the same crime. ” The audience can plainly see that Danforth has gone too far, hanged too many people and has to carry on what he’s done. If he pardons Rebecca Nurse, John Proctor and the others, what about those who already have been hanged without reason? He just cannot admit he was mistaken. It is easier way for Danforth to hang them all even if really he feels they may be innocent. 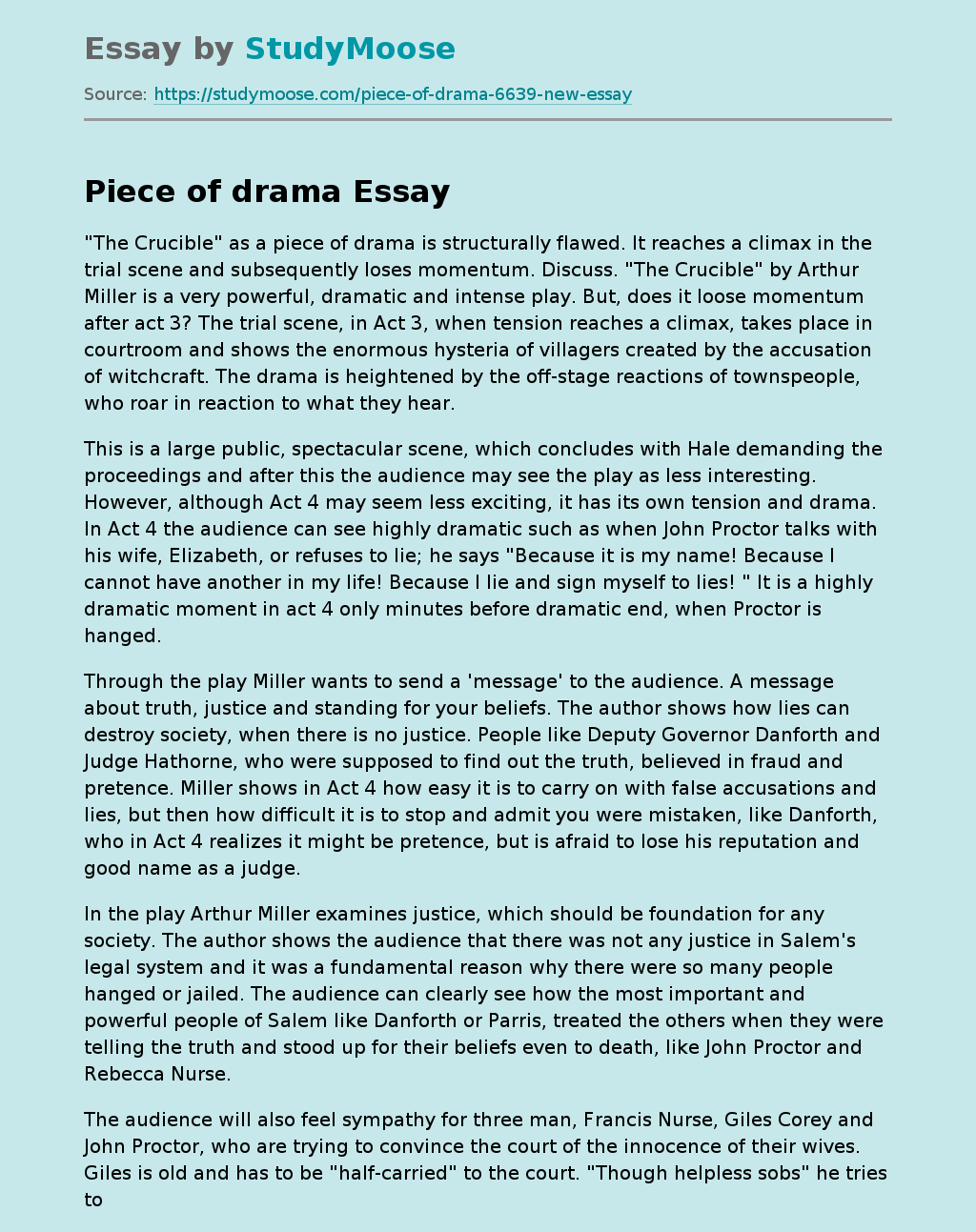