Energy metabolism is where the nutrients oxygen and glucose are took in and delivered the organs. Energy is needed in order for our body to be able to function. Energy helps break down molecules and to build new molecules. The cardiovascular system consists of the heart, blood and blood vessels. The cardiovascular system is the major transport of materials to and from the cells. Blood is carried from the heart around the body via the arteries and the blood is then carried back to the heart via the veins.

Don't use plagiarized sources.
Get Your Custom Essay on Physiology of Two Named Body Systems Just from $13,9/Page

The capillaries connect the arteries to the veins; the function of the capillaries is too supply the cells with nutrients and oxygen. The cardiovascular system is responsible for the transport of oxygenated blood around the body. It will transport these to the cells and collect the deoxygenated blood which is ready for the excretion from the cells. The cardiovascular system will deliver the nutrients oxygen and glucose via the blood stream.

Oxygen is need for aerobic respiration to occur.

Discuss the role of energy in the body

Because our body is working all the time our cells require a frequent supply of energy otherwise they die. Your body requires energy in order to be able
to perform tasks. Energy comes in many different forms. They are chemical, light, sound, heat and mechanical. You can get energy from different food substances i.e. glucose, fatty acids, sugars and amino acids. To be able to get the energy from these food substances energy needs to be released with oxygen. This is known as aerobic respiration. The role that energy plays in our body is the process of moving molecules in and out of our cells while breaking down the larger molecules and building new molecules. The cardiovascular system transports oxygenated blood around the body and to the cells. It will then collect the deoxygenated blood which is ready for the excretion from the cells. The cardiovascular system will deliver the nutrients oxygen and glucose via the blood stream. Oxygen is need for aerobic respiration to occur.

The cardiovascular system will pump oxygen and nutrients carrying blood throughout the body. The glucose molecules that are carried by the blood are transported into the cells. Along with the oxygen that is diffused into the cells they are used in respiration to produce ATP. The respiratory system is responsible for bringing in oxygen as well as using it to burn the nutrients that we need for energy. The respiratory system contains alveoli which allow the diffusion of oxygen into the blood stream and carbon dioxide out of the blood stream. This process allows the respiratory and cardiovascular system to work together to transfer the nutrients. Oxygen is needed to burn nutrient molecules. To do this you use aerobic metabolism; this process requires oxygen which is provide by the lungs. There are two different types of respiration that help with energy production; they are aerobic and anaerobic respiration.

An example of aerobic respiration is when you are exercising at a steady pace and the cardiovascular system is able to provide the muscles with oxygen that they need; the equation for aerobic respiration is, glucose + oxygen = energy + carbon dioxide + water. An example of anaerobic respiration is when you are exercising a higher intensity and the cardiovascular system is unable to supply enough oxygen to your muscles. As there is no oxygen attainable glucose is therefore burned in order to produce energy and lactic acid; the equation for anaerobic respiration is, glucose = energy + lactic acid. Digestion is a process of food breakdown which allows nutrients to be used in the body for the production of heat and energy. The digestive system works to provide the body with energy by breaking down food molecules in order for the body to use it.

The food molecules that have been broke down for energy helps with essential body functions. The useable energy helps with physical activities such as walking and playing sports as well as working, talking and important activities breathing and thinking. The food we intake contains a chemical energy and when it’s released by the cells it helps our body’s work. In order to obtain the energy from food oxygen is required. This process is called aerobic respiration. Some of the energy that we release is heat which helps keep our bodies warm and the rest is stored in the substance known as ATP (Adenosine Triphosphate). ATP will be stored until our bodies require it.

Energy is measured in joules and kilojoules. Energy is necessary for our body to function; it is required in order for molecules to be able to move in and out of our cells. The breakdown of the large complex molecules into a simpler form in order to release energy is known as catabolism. This reaction will release the chemical energy which is stored in the organic molecules; i.e. the breakdown of fat into glucose then into energy. The opposite of catabolism is anabolism; this is where the energy and electrons that have been released through a catabolic reaction fuel the anabolic reactions. New tissues, muscle fibres, hormones and other body chemicals are examples of an anabolic product. 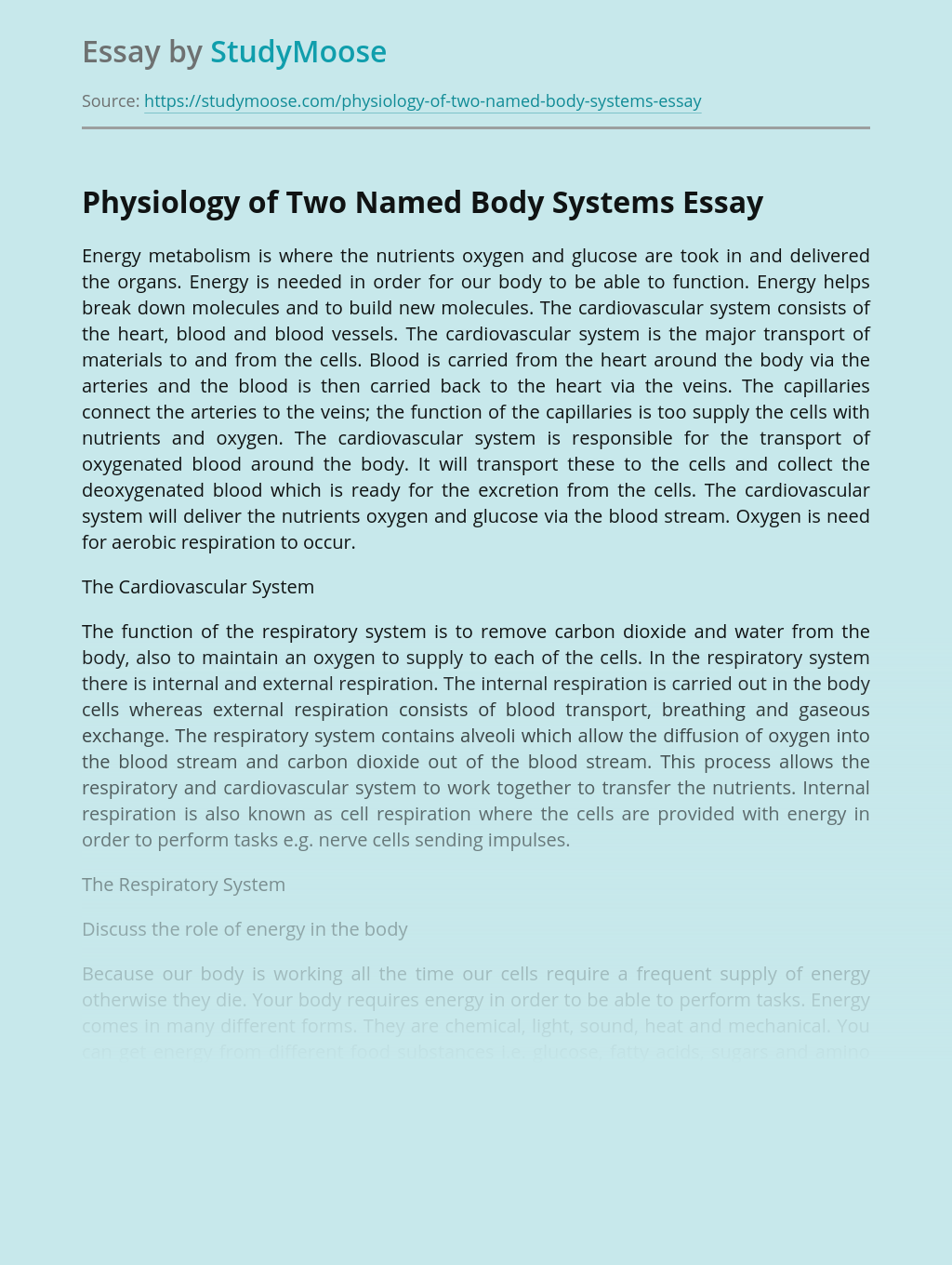