Philosophy of Voltaire in Candide

Candide is a book written by a French philosopher Named François-Marie Arouet, but people usually call him Voltaire. It was published in January of 1759 in Geneva, Paris, and Amsterdam. My teacher picked this book for us because of the time it was written. Candide is said to be Voltaire’s biggest contribution to the French revolution out of all of his writings. The impact this book had on the French revolution is the biggest reason I can see for why he picked the book for us to read, it is also funny at times which may have been a factor.

Don't use plagiarized sources. Get your custom essay on
“ Philosophy of Voltaire in Candide ”
Get custom paper
NEW! smart matching with writer

The book is very useful to my studies because it shows what life was like back then. It shows some of the most major imperfections in the way that people lived at the time in the form of satire. It shows the horrible lives people lived, and the atrocious things that people had to go through. Voltare often needs to turn the truth into satire, to make fun of certain ways of life, like optimism, which he almost constantly mocks throughout the entirety of the book.

It also mocks organized religion, politics, and class hierarchies, which were also major issues at the time.

Voltare wrote this book to show how he wanted to spread his philosophy. Throughout the book he mocks optimism almost constantly which shows how he was so against optimism as a whole. This is shown by the fact that it seems like whenever something horrible happens to candide and his friends, pangloss says something along the lines of, “things should be as they are, for everything is for the best.

”(1) It seems as if the characters of Candide are the human versions of the philosophies that he supports and the ones he does not. He shows how much he is against optimism by constantly throwing the characters of the story into situations that completely contradict pangloss’s point of view. One of the many examples of this is in chapter 5 when the ship that Candide and Pangloss had travelled on, wrecked and when the reached land, there was almost instantly an earthquake. I believe that the previous statements also support the fact that voltaire wanted to entertain and persuade readers in this book. When reading the book is certainly very interesting and there aren’t very many dull moments in the book.

He makes sure to skip over all of the “Boring” and “unnecessary” details when there isn’t a lot of action so that he can get straight to the interesting parts of the story. He also wants to inform his readers on his philosophy and beliefs. The book perfectly conveys his beliefs of anti-optimism and makes sure that people know exactly what Voltaire is wanting you to believe in. I think that this book was not intended for young readers. This book is pretty graphic in some of its scenes, but it would also be difficult for some readers to understand the reading if they were too young because of the style of writing. An example of the graphic nature of the book is on page 17, when candide is talking to Cunegund. Candide says “then you have not been ravished? they did not rip open your body, as the philosopherPangloss informed me?” (2), this quote descriped rape and also graphic descriptions of how she was injured.

This type of writing is not good for little kids obviously, so it would not be intended for him. I think that the book is intended for people around our age range (Highschool students). Voltare wanted to convey his message and I think that he would have intended for young people to read it since they are the ones that are going to grow up and spread his philosophy. The authors point of view which was very anti-Optimistic, certainly helps me understand this better. It shows how even though the book is pretty though on its characters, Voltaire is likely just exaggerating it to get his point across. Since I also know that this book was written to be a satire, I know that I can’t take everything as seriously as I might have if I didn’t know it was satire.

Candide is a novel by Voltare. The main plot line is that a young boy, named candide, is in love with his cousin named Cunegund. He is kicked out of the castle, which he lived in after he kisses Cunegund. This sends him on a giant adventure where he joins the army, survives a shipwreck, Finds the lost city of El Dorado, and many other things. Throughout the book he loses and reunites with his mentor Pangloss multiple times, and does the same with multiple other characters like Cunegund. His mentor Pangloss has the philosophy that “everything is for the best”, even though throughout the story he is proven multiple times that maybe, that is not the case. The whole story ends when Candide reunites with cunegonde and marries her, but she is not ugly (which voltaire mentions many many times). For how this connects to related topics, a lot of the events that happened in this book actually happened in real life. For example it shows how horrible the seven years war was, and how the Earthquake in Libson destroyed parts of the world. These events that happened throughout the book connect back to Voltaire’s view on optimism. He uses these events to mock optimism through the entire story.

I had mixed opinions about the text. When first reading it I thought that it seemed to drag on in some sections. He has a strange writing style throughout the book. There are sections where it seems as if no time has passed at all, but in the book it had been multiple months. Altogether though I did find Candide to be an enjoyable read and was worth my time. The author definitely did fulfill his purpose when writing the book. He completely smashed optimism and made optimism seem like a silly philosophy. The exaggeration used throughout the book made it very obvious what he was against. One example is when Pangloss was hung on page 21. Later in the book he returns, and does not seem to be fazed by it whatsoever. He still completely believes that “Everything is the best” (3).

It is safe to say that most people would have a much more negative reaction to being hanged, and this is exactly how Voltare mocked optimism, by constantly proving Panglos’s philosophy to be foolish. I find almost the entire text to be interesting, the writing style is very different from what I would consider normal in today’s writing, and it was good to be able to read something different. I don’t usually read older books (just because I find them harder to read) but once I started reading the book I began to understand the writing style and could get more information out of the book faster. I enjoyed learning about people from that time period. It has always been interesting to me how people lived so long ago, so It was very interesting to read about a story that takes place back the.

The main parts that I found uninteresting is the way that they talked, sometimes when reading I found myself zoning out just because of how long and drawn out some of their stories can be. I found the way that they spoke to be very uninteresting, but that’s about it for this book, I found more of the book to be interesting and uninteresting. I definitely think that this was a worthwhile read for me. I enjoyed reading this book much more than I thought I would have. I also thought that it helped me understand the time period much better and gave me some historical context for the things we are learning about in class and in the textbook.

I think that this Book did help me understand more on the topics we are learning about in class. The book helps me understand idealisms from the enlightenment like optimism and it helps give me a little context into the textbook reading. I find it easier to learn things in school when they are put into a story. I found that when putting it into a story it helped me remember things that I wouldn’t remember if it wasn’t in a story. For example I remember what an “Auto-De-Fe” (4) is, which is something I wouldn’t have been able to remember if it hadn’t been in this context. I think that this helped advance my abilities as a scholar in many ways. I didn’t procrastinate on this project, which would be completely out of my character had I still been in middle school.

The project seemed overwhelming at first but I think that as I am finishing this, I will be better at doing the next book critique and the one after that with the skills I acquired from this one. I think that I would recommend this text to another student. It does not seem like an appealing book to most people (including me) if you just go off of when it was written and the author. But I enjoyed the book much more than I thought I would.I don’t know if I would consider the events that I had been learning about to be altered, but I think I have definitely understood them better. I think that I have the same perception of events like the enlightenment and the seven years war.

Philosophy of Voltaire in Candide. (2021, Dec 02). Retrieved from https://studymoose.com/philosophy-of-voltaire-in-candide-essay 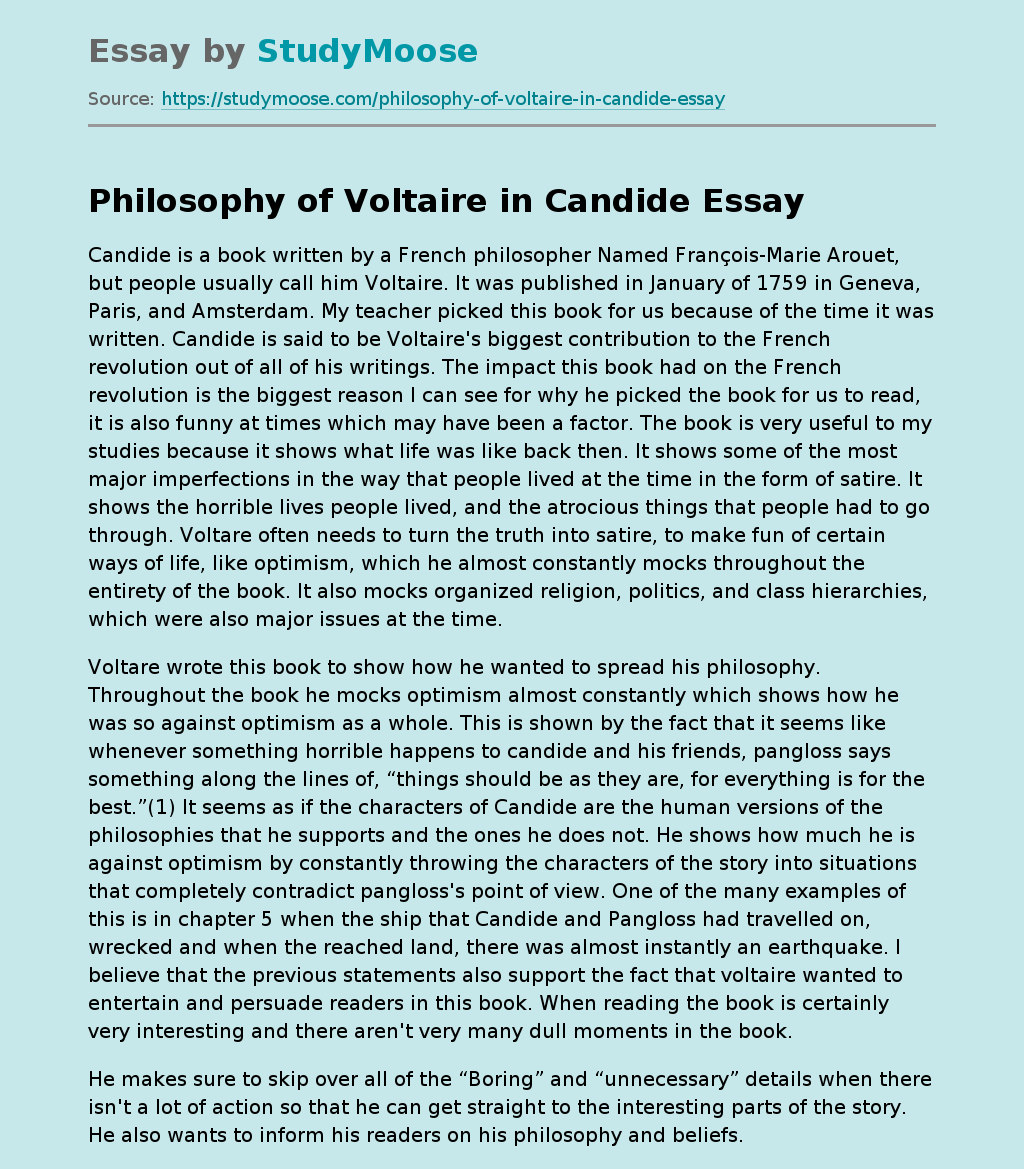