Philosophy of the movie Big Fish

The philosophical twist of mixing fact with fairy tale in story telling put a great spin on the plot. It gave the director the ability to make the impossible seem probable! The movie is about a very interesting father named Ed whom loves to tell facts with a little bit of flavor, as quoted in the movie. However we portray them as tall tales, but since he tells them with such a seriousness and attachment to his own life you want to believe them.

Don't use plagiarized sources. Get your custom essay on
“ Philosophy of the movie Big Fish ”
Get custom paper
NEW! smart matching with writer

However the son, will, does not enjoy these stories. He believes they are all lies which create a detachment between him and his father.

But as the movie goes on, the real question for will to discover is, are all these stories really fake. Inspired by the scientific phenomena of a gold fish growing in accordance to the size of its surroundings, Ed applies this theory to his life and embarks on a journey to satisfy his ambition! In this journey we witness Ed convincing a giant to leave town and be partner in discovering life, finding a hidden town that had lush grass for streets, catching a fish with his wedding ring, or viewing his final hours in the eyes of a “witch”.

The stories in this movie are good examples of improbable stories with poetic truths. For example in the story of the fish, we learn that to catch the uncatchable women you have to give her a ring! The movie does a great job of blurring “fact” with “fiction”.

For instance, if we were to view the stories in this movie as real life, how would we react? In my opinion with my realist mentality, I would look at these stories and believe they are complete nonsense!

But, if I took a step back and try to look at the stories with the most objective mind I can, the possibilities of these stories actually happening seem more probable. Use the story of the witch and her futuristic eyeball. There is a spiritual realm that is all around us. Is it crazy to think that some woman could have been in touch with, let’s say evil spirits, which gives her the power to scare people with visions? Or is it really impossible for a man to catch a fish with a shiny object?

Or is it really impossible for a town to be self-sufficient, maintain healthy grass, and not build any streets? I would like to think so! So with that being said, the concept of there not being much of a distinction between “fact” and “fiction” would be true! As the movie concludes we find out, just like will, that these stories are in fact true. When Will attends his father’s funeral he sees the Giant, the Siamese twins, Winslow the poet, and many more of the story characters!

However all of the character appeared different in real life compared to the “Flavorful Facts”. Nonetheless, this confirmed his father’s stories showing the small distinction between fact and fiction! It is at this time Will’s eyes are opened and it gives him the ability to see poetic truths behind the stories. In the end we hear will’s son telling friends one of Ed’s stories, and Will concludes with this phrase, “A man tells his stories so many times that he becomes his stories—they live on after him and in that way he becomes immortal. ”

Philosophy of the movie Big Fish. (2016, Dec 03). Retrieved from https://studymoose.com/philosophy-of-the-movie-big-fish-essay 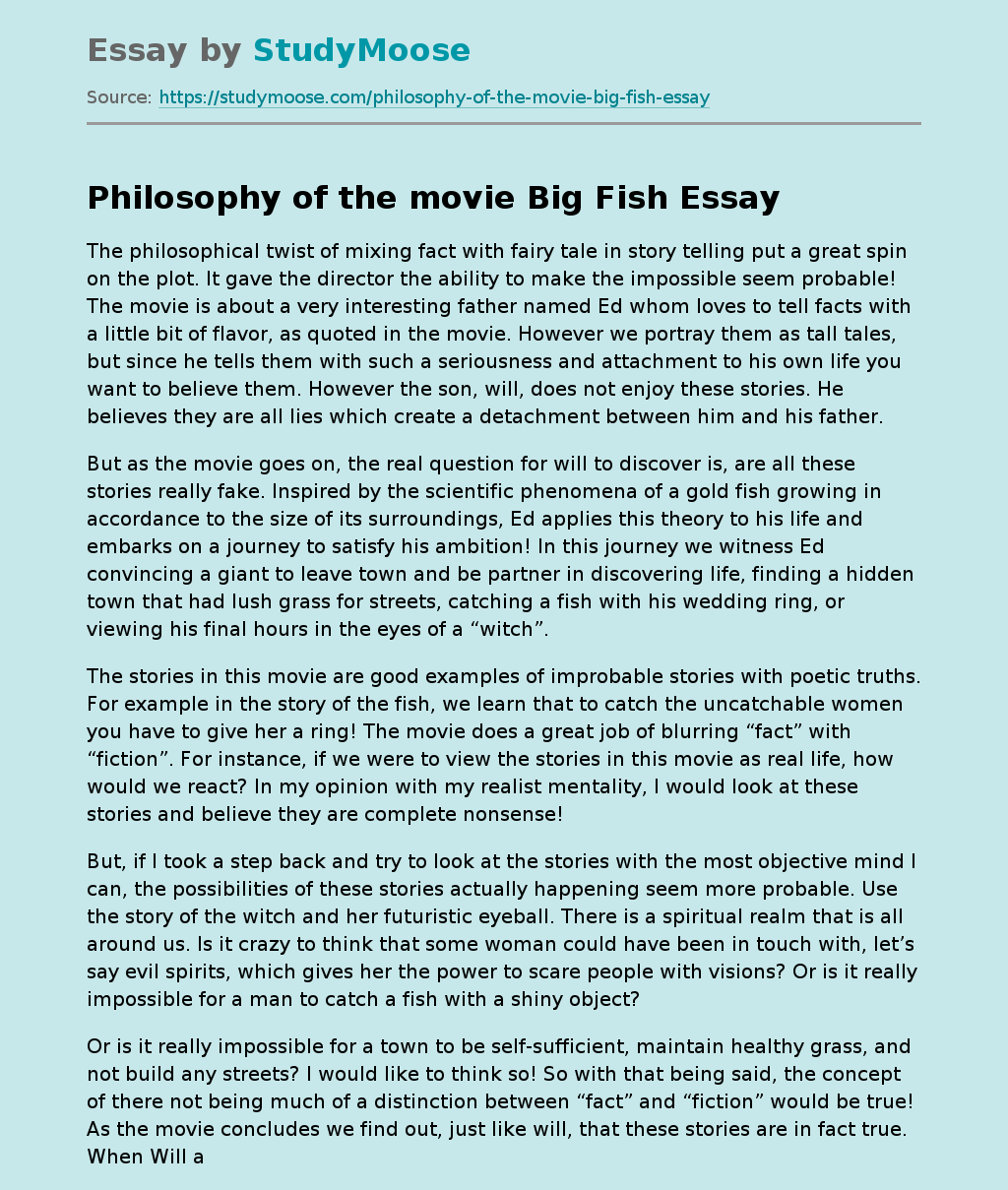