1.what is soft determinism?

Soft determinism( compatibilism) is the doctrine that determined actions can nevertheless be free.

3. What is stace’s explanation of how all our actions have causes ,yet some actions are free?

His explanation is those acts that are directly cause by the internal psychological states of the agent are free. we can be held responsible only for the acts we perform freely.

Don't use plagiarized sources. Get your custom essay on
“ Philosophy Exam Questions ”
Get custom paper
NEW! smart matching with writer

Taylor’s ingenious physiologist thought experiment is about a man who is hooked up to wires and controlled by various button, sort of like Frankenstein. Taylor’s drug addiction thought experiment is about being addicted to drugs simply by being given the drugs over a course of time. These two experiments undermine traditional compatibilism because in the ingenious physiologist experiment both of the conditions of traditional compatibilism are met but the person being controlled actions aren’t free because his desires are not his own.

They come from the physiologist, not from himself.in Taylor’s drug addiction experiment undermines traditional compatibilism because if your will is under your control your actions aren’t free.

5. What is frankfurt’s decision inducer thought experiment? How does it attempt to undermine the traditional notion of responsibility?

Frankfurt’s decision induce thought experiment describes a situation in which jones can’t do otherwise because black won’t let him.

but if jones does what black wants him to do without blacks intervening, then jones is responsible for what he does even though he couldn’t have done otherwise.

7. What is slote’s hypnotized patient thought experiment? How does it attempt to undermine hierarchical compatibilism? >> Slote’s hypnotized patient thought experiment is about a man who is undecided between x any y so he visits a hypnotist who induced him into deciding in favor of x. It attempts to undermine hierarchical compatibilism

3.3
1. What is the libertarian argument?

The libertarian argument is our free actions are under our control because they are caused by our selves. Your desires must be your own.

2. What premise of this argument is accepted by both libertarians and hard determinists?

3. What is event causation?

Event causation is causation that occurs when one event causes another.

5. some people claim that our experience does not provide evidence that we sometimes act freely.what is their argument?what is the libertarian reply to this argument? 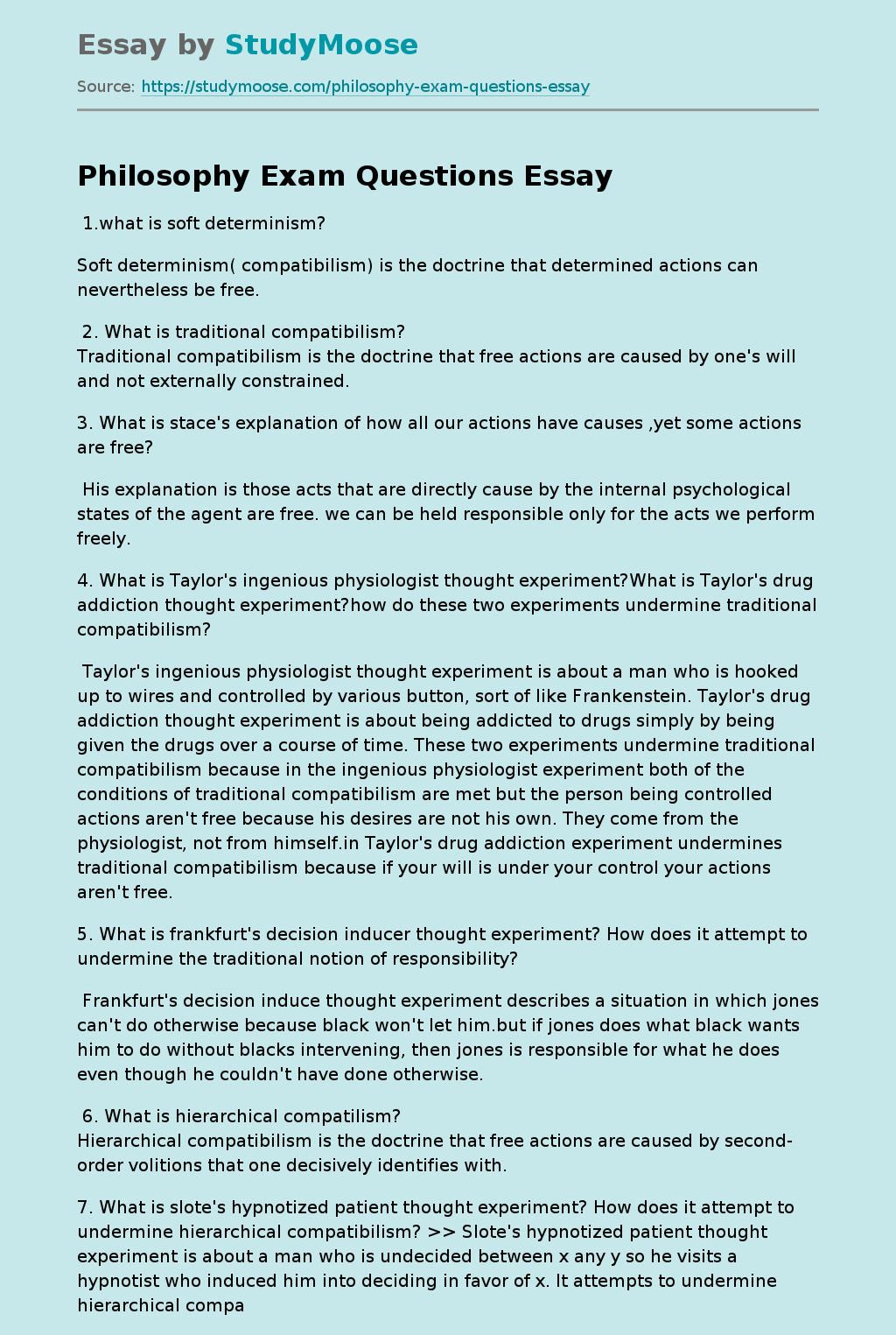