Philosophers and The Concept of Supreme Being

Absolute stability in philosophy refers to the concept of the unconditioned, ultimate, Supreme Being or wholly other. The term is used to describe anything that is free from restrictions and thus upholds independence, while rejecting relativism. On the other hand, relative stability is established as the thesis that all points of views are equally valid. The position holds that all moralities are equally good and all belief systems are equally valid. This essay discusses the concept of modernity and philosophies of political thought.

Don't use plagiarized sources. Get your custom essay on
“ Philosophers and The Concept of Supreme Being ”
Get custom paper
NEW! smart matching with writer

It discusses the philosophies before and after Immanuel Kant to determine which side of philosophy the aligned. Furthermore, the paper will analyze theories of living well and how they can be applied in life struggles to achieve harmony and balance of life.

At the start of the 17th century, European philosophers started debating over who should govern a nation. Modern political thinking came from the enlightenment project and focused on critiquing the medieval legislative history that was based on religion and faith.

Enlightenment philosophers argued for different forms of democracy at the tie when the absolute rule of kings weakened (Warburton, 23). The modern political reform is thus an elusive idea that is based on the enlightenment period that focused on keeping together societies that are institutionally diverse. Philosophers before Kant include John Hobbes, John Locke, and Jean-Jacques Rousseau.

John Hobbes is famous for his philosophy of sovereignty to bring order while believing in the superiority of the state. His doctrine originated from the aftermath of the English Civil War as he explained why the public should respect the state.

According to Hobbes, the natural state of man is one where he desires felicity, such as happiness which differs in people who seek for the right of nature (Warburton 10). As such, he believes it is only through the creation of commonwealth that civilization can be attained. He asserted that social contract that helps to achieve the law of nature requires the use of coercive power of the state through sovereignty since the absence of higher authority affects law and order. As such, he was aligned to relativism stability rather than absolute that believes in free will.

John Locke (1632-1704) was born in England just before the Civil war. He is referred to as the reluctant democrat whose philosophy was based on defending a constitution government that protects the rights of people. His philosophy on liberalism enforced an idea that political power is needed to achieve human rights (Warburton 25). This doctrine believes enhancing the freedom of people is the central problem of people, and thus the government should protect individuals and ensure equal to right and liberty. As such, John Locke was aligned to relativism philosophy.

Jean-Jacques Rousseau is another philosopher known as the extreme Democrat who challenged the ideals of sovereignty and representation while believing all power originates from people. He introduced a political thought that challenges natural inherent rationality and sociality of humanity, stating that human rights should be found upon universal natural law. As such, Rousseau believed everyone whether citizen or ruler should respect each other while bound by social contrast (Warburton 10). Rousseau leaned towards absolute stability of philosophy that believes in people power. As such, he is aligned to Absolute philosophy.

Philosophers after Kant include Karl Marc, G.W.F Hegel, and John Stuart Mill. Karl Marx proposed a philosophy of socialism and communism that believed the human individual emerges through social relations. His philosophy led to the establishment of anarchism and syndicalism as a form of political thinking. Marx also expounded on the ideology of communism that was established as a curiosity after the collapse of socialism, which can mean the society of mode of existence without ownership or private property (Marx 94). At the same time, his philosophy of communism stated that it is the only way to overcome alienation and exploitation of the weak within the wage labor system. His philosophy was based on human representation and freedom to social creation, while rejecting a notion that the state and politics are independent of each other since it allows the rich to exploit the poor. As such, Karl Marx was aligned to absolute stability in philosophy.

Hegel (1770-1831) presented a philosophy of right that is summed up by the assertion that the rational alone is real. It argues that free will can only be achieved in the context of property rights and relations. In other words, a person is not open until he participates in all three aspects of the life of a state inkling the abstract power, morality, and ethical life. Hegel’s philosophy of right played a role in developing Marx theory of modern state; He lauded the civil service as the universal class embodying the interest of the whole society (Warburton 30). He presented a doctrine of totalitarianism. Hegel aligns with absolute stability due to his advocacy for free will.

John Stuart Mill proposed an idea of utilitarianism as the only way to achieve political right while seeking to explain civilization. He thought the political right involved maximizing pleasurable states and minimizing painful ones. His philosophy focuses on maximizing the personal liberty of all citizens. Mill was able to inspire several social reforms in England after the industrial revolution had caused gaps between the rich and the poor. Mill’s political theory disregarded the social contract theory based on its moral imperialism. His philosophy of moral utilitarianism stated that people’s moral imperative to make decisions that benefit a greater good (Warburton 35). As such, Mill aligns to Absolute stability that also denotes anything that is free from any restriction. Philosophers under this view assert that one thing such as moral value is relative to some standpoint such as a conceptual scheme. Mill was a social progressive who believed in the freedom of people to live the way they choose. As such, he is aligned to absolutism philosophy.

The doctrines of living well in philosophy are used to describe how to achieve well-being. The theories assert that human beings can only achieve well-being by seeking to fulfill happiness an experience the pleasures. The meaning of life is different in people as one man’s meat may be another man’s poison (Law 25). As such, there is no abstract meaning for life with every person having a specific

Buddhism detachment theory is a state where a person overcomes his attachment to desire for things to attain a heightened perspective. This theory applies to most people who realize the importance of living without clinging to things. True detachment allows an individual to live without getting attached to anything that creates suffering. Usually, people’s attachment to events, people and things tend to cause them pain. The non-attachment theory entails learning to let go of thoughts or emotions that create suffering. The detachment helps to experience relief and inner peace (Frankl 1).

One of the doctrines of Buddhism is that self-is illusory and causes suffering. The principle does not mean a person should be pessimistic, instead recommending easing pain by trying to avoid or suppress difficult emotions. A person who has lost a beloved one can achieve better well-being by not buying into the idea and accepting that death is part of life. A person can achieve well-being b practicing acceptance of emotional pain or strife and not attaching to the concept of loss. They can embrace imperfection and let go of a belief that life should be easy. At the same time, the non-attachment theory entails celebrating the idea of change and embraces a concept of impermanence. This idea helps a person to appreciate everything he is experiencing without holding to them. A person can also let go of the attachment to a sense of constant self to rest more comfortably. Happiness is in non-attachment and allows to live a better life. Non-attachment can be achieved through medication or practicing yoga that enables a person to

On the other hand, the theory of Taoism harmony can help a person to navigate life struggles. The opinion lays out a simple framework for achieving peace and makes life a little bit easier. Taoism comes from Ancient China teaching how to live in harmony with the world. It describes how to act following the alternating cycles of nature. This theory provides several teachings that can guide in life struggles (Frankl 1). For example, it shows that life can get complicated quickly, but sometimes all a person needs is to get back to the basics. When an individual feels overwhelmed with life pressures or suffering, simplicity, patience, and compassion can help manage actions. The simplicity in thoughts and actions helps someone to return to the source of being, patience accords with the way things are and compassion allow an individual to reconcile with all things.

At the same time, the theory helps to achieve harmony by understanding that it is better to allow things to take their natural course rather than fight against the conditions. The doctrine can help affect lifestyle pressures that come with trying to jump at opportunities. This theory also applies to the non-attachment philosophy of letting go by accepting that only change and death are true constants in life. A person must remember to let go and allow life to take its course whenever he realizes that all things change. For example, a person must accept the loss of a beloved one by letting it go rather than holding onto it and create suffering. Nature can also be described in dualities and two opposites complementing each other. The concepts of Yin and Yang also apply to this philosophy to explain an aspect of creating a balance as a pattern in nature. For example, a person who becomes too rigid in life may break under pressure, and thus needs to be flexible a restore the balance.

Philosophers and The Concept of Supreme Being. (2021, Apr 13). Retrieved from https://studymoose.com/philosophers-and-the-concept-of-supreme-being-essay 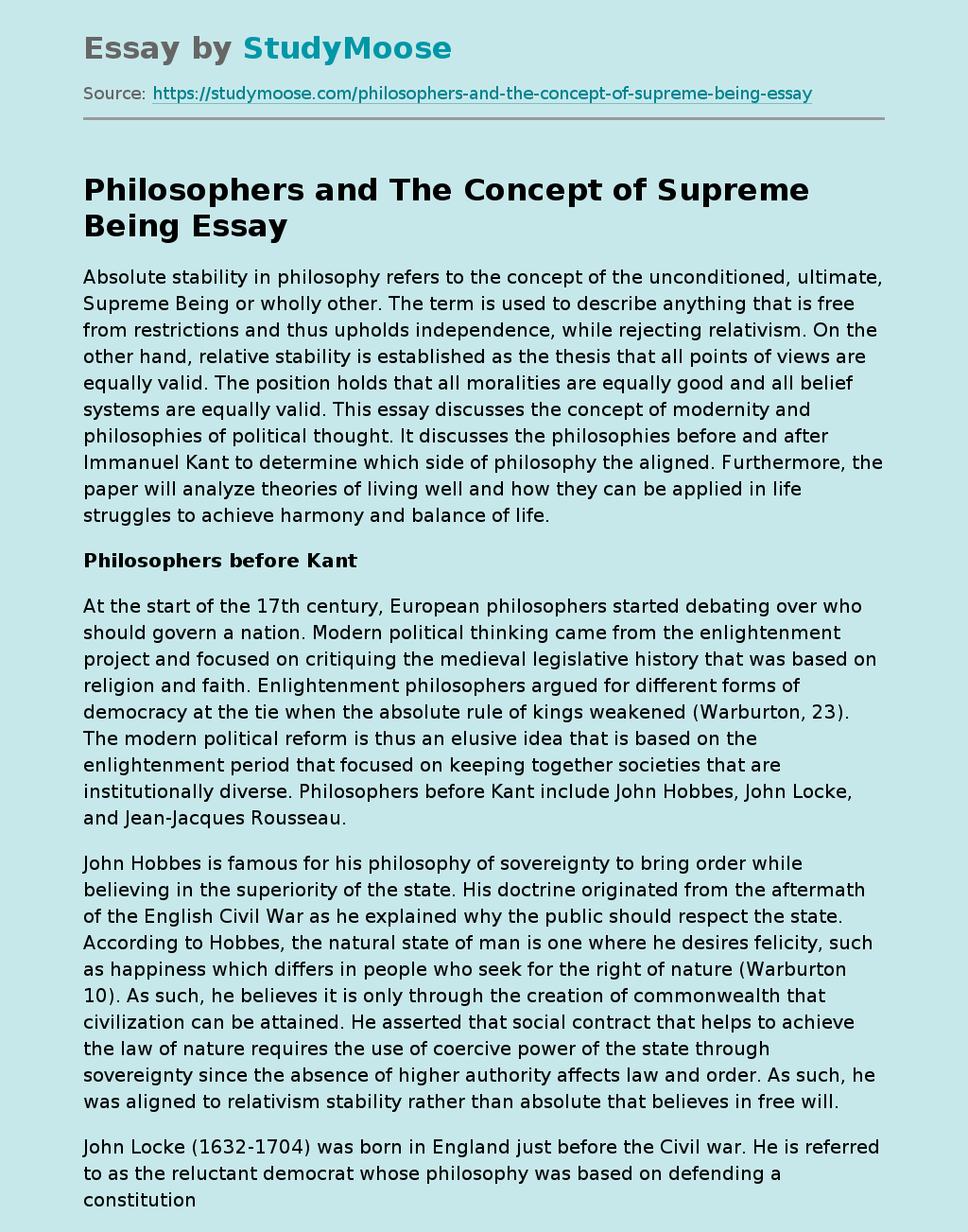