The story is spinning around the Philip “Pip” whose life had the most stange events, coincidences and significant twists. He beat his own destiny by becoming a London gentleman, a companion to the wealthy old Miss Havisham and her gorgeous but snob adopted daughter, Estella. The novel has three parts, the First, Second and Third Stage of Pip’s Expectations. Each stage brings up chapters of his life, his life as a child, his life as a paid companion to the Havishams and his subsequent life avoiding his class and being ashamed of his humble origins with his sister and her husband, who was Pip’s father figure, since he was orphan and his status of being a London gentleman and having affairs with high-classed people.

Don't use plagiarized sources. Get your custom essay on
“ Philip’s “Pip” life ”
Get custom paper
NEW! smart matching with writer

An interesting aspect of this novel is the love-plot because Pip matured as a paid mate to Miss Havisham and her daughter, whom he admired, despite the fact that she is a rich snob and it made him afraid to show his humble beginnings.

His love for Estella never died, in spite of the warnings his friend Herbert gave, that Estella was being brought up to revenge on the male figures because Miss Havisham was left by one. Ironicly, Miss Havisham never loved Estella. She gave her all she had, provided her more than enough and yet the young Estella had always longed for love. The companionship that Pip gave was paid, and the two protagonists seemed to have shared an artificial love, though in the more pleasant ending of Dickens, they ended up being together and vowed never to part again.

In the more latter part of the story wherein

The plot of the blossoming love between Pip and Estella is not the primary object of the novel. It had only pictured that though the most unpleasant elements and unlikely circumstances, love could still thrive, if the two sides who are in love can manage to remain together. Estella was raised in such way that she could never be the woman she aspired to be. Pip has to accept his role in society as somewhat of a pretender, hiding his origins just to conform with the hypocrisy of high society. This could not have taken place without his mysterious benefactor, who gave him a generous allowance up until the time that he reveals himself to Pip. Pip, on the other hand, was somewhat blinded by the elegance and prestige of the upper class life, kept hastening efforts to hide his true identity, roots and humble life.

Though there was nothing wrong with the way Pip fell in love with Estella. There was some kind of a flaw while he was on the course of pursuing her. His childhood friend Biddy was obviously in love with him and he did not even dare try to show at least a little bit of appreciation. All throughout his life, Biddy has cared for him, even becoming his teacher in the evening school, all of Biddy’s efforts were in vane, because she didn’t possess the quality that Pip wanted in a woman, which was class and elite upbringing.

The overpowering factor that influenced Pip in all of his decisions was ambition to go after the life he wanted. Biddy was very kind and intelligent, caring and loving, and would have been a perfect wife for him, but instead, he chose to pursue Estella, who put him in the most unusual emotional situations he had been in his whole life, and made him traverse long roads. Pip’s regret was evident when, after being estranged from Estella, he returns home to propose to Biddy. She had already married Joe Gargery, the man whom he looked up to as a father. In the end, he had met the widowed Estella and vowed to her that they are never going to be separated again.

In conclusion, love in Charles Dickens novel is complicated and make the characters to through a million emotions, but in the end everything is going on the right path, the way it has to be. 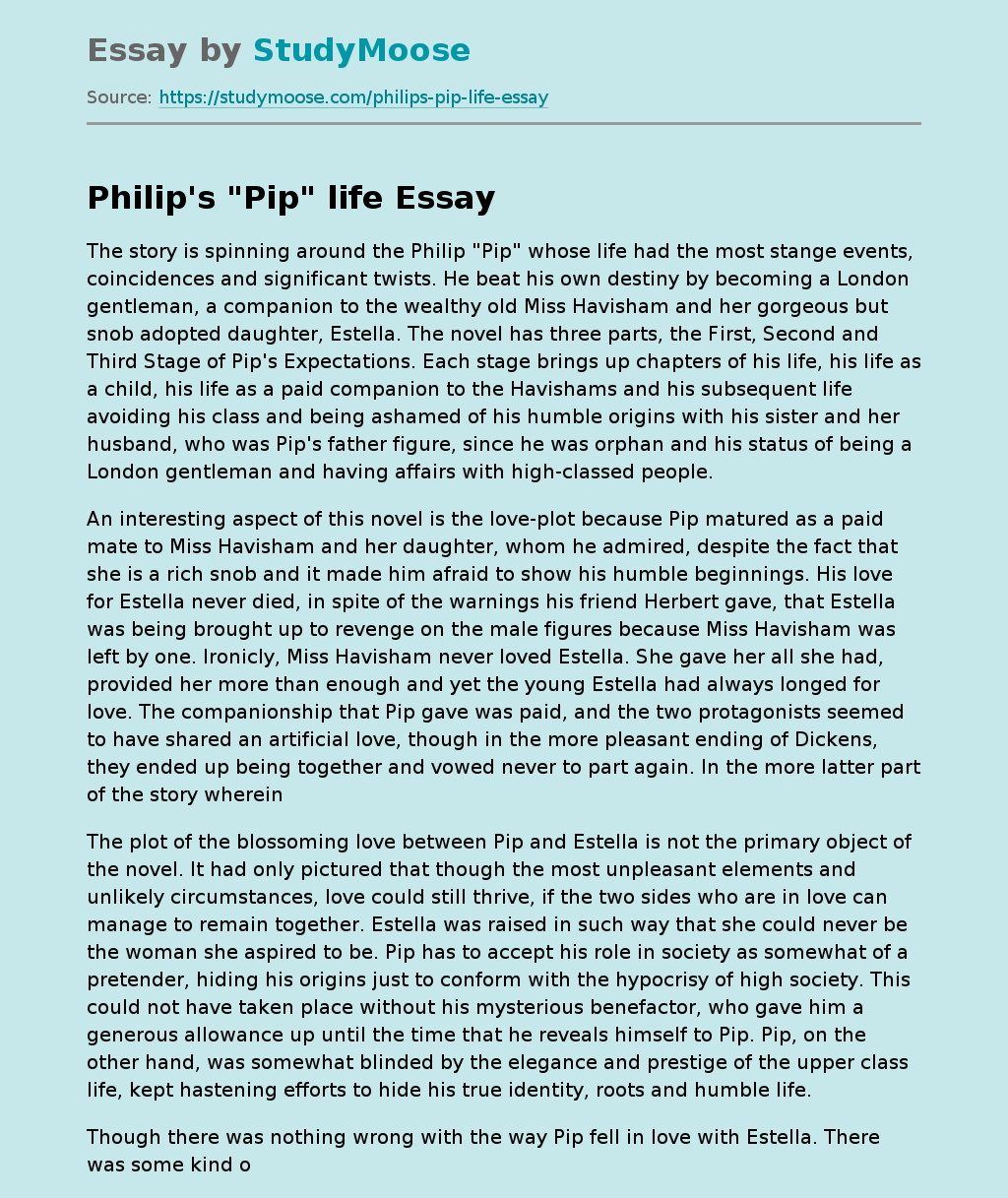