The 2016 presidential election is one of the most talked about topic of today. To date, just more than a year from now we will again be having our new set of national leaders. It is again the time when we can use our power to vote and elect the deserving person that will eventually rule our country. The scheduled date will be on a Monday, 9th day of March, 2016. As we all know, the incumbent president Benigno Aquino III is barred from seeking re-election pursuant to 1987 Philippine Constitution.

Turn in your highest-quality paper
Get a qualified writer to help you with
“ Philippine Presidential Elections 2016 ”
Get high-quality paper
NEW! AI matching with writers

Therefore, this election will determine the 16th President of the Philippines.

In recent months, we have heard so many big names that can potentially be our next Philippine president. Two of the most prominent Filipino politicians has officially declared their candidacy over presidency, both with strong will and competitiveness. Without any surprise, the current Vice President Jejomar “Jojo” Binay of the United Nationalist Alliance (UNA), our first guy on the list, confirmed his plans of running as president during an interview back in September 2011.

The longest-serving Makati City Mayor, now the Vice President of the Philippines not only created a strong political dynasty but he also realizes his colossal visions.

While VP Binay effortlessly made it to the list of possible and feasible presidential candidate, our next guy, a potical rival of the former, and the current Senate Majority Leader, Sir Alan Peter Cayetano, needed to closely monitor surveys to make sure he’s still in the running and viewed by the Filipinos as a viable candidate, according to a source familiar to Cayetano.

The 43-year-old Senator from the Nacionalista Party (NP) is serious about running that he has to put together a team to work on campaign preparations. In a March 2013 interview on Morning’s ANC he said “I want to be the president of this country. I think I can do something great for God and his people.”

Among other politicians who would possibly run, one is Sen. Ferdinand “Bongbong” Marcos Jr. of Nacionalista Party. 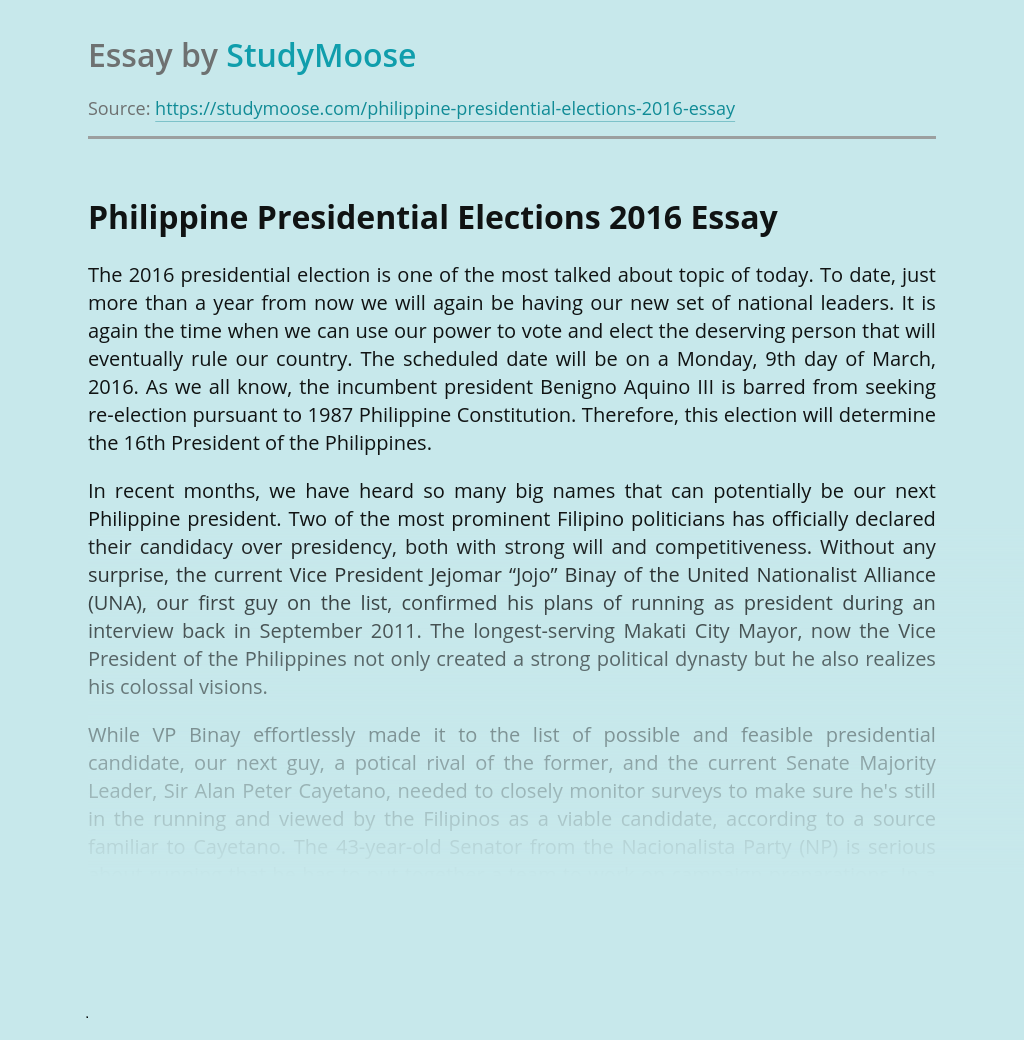 Turn in your highest-quality paper
Get a qualified writer to help you with
“ Philippine Presidential Elections 2016 ”
Get high-quality paper
Helping students since 2015
Stay Safe, Stay Original