Poetry and metrical romances
* Ladino Poems – Were natives of first Tagalog versifiers who saw print: highly literate in both Spanish and the vernacular.

* Corridos – Were widely read during the Spanish period that filled the populace’s need for entertainment as well as edifying reading matter in their leisure moments.

* Awit – like corridos, these were also widely read during the Spanish period as entertaining, edifying, reading manner in their leisure time. It is also a fabrication of the writers imagination although the characters and the setting may be European. The structure is rendered dodecasyllabic quatrains. Prose

The prose works of the Spanish Period consisted mostly of didatic pieces and translations of religious writings in foreign languages.

Dramas
Religious drama
* The Panunuluyan– Literally, seeking entrance, the Tagalog version of the Mexican Las Posadas. Held on the eve of Christmas, it dramatizes Joseph’s and Mary’s search for Bethlehem. * Cenaculo – Was the dramatization of the passion and death of Jesus Christ.

* Salubong – An Easter play that dramatizes the meeting of the Risen Christ and His Mother. * Moriones – Refers to the participants dressed roman soldiers, their identities hidden behind colorful, sometimes grotesque, wooden masks. * The Santacruzan – Performed during the month of May which have the devotion for the Holy Cross. It depicts St. Elena’s search for the cross on which Christ died. * Pangangaluwa – An interesting socio-religious practice on All Saint’s Day which literally means for The Soul. Secular dramas

These were generally held during the nine nights of vigil and prayers after someone’s death, on the first death anniversary when the family members put away their mourning clothes. * The Karagatan – comes from the legendary practice of testing the mettle of young men vying for a maiden’s hand. The maiden’s ring would be dropped into sea and whoever retrieves it would have the girl’s hand in marriage.

* The Duplo – A forerunner of the balagtasan. The performances consist of two teams; One composed of young women called Dupleras or Belyakas; and the other, of young men calledDupleros or Belyakos. * The Comedia – It is about a courtly love between, a prince and a princess of different religions. It is about a Christian-Muslim relationship. 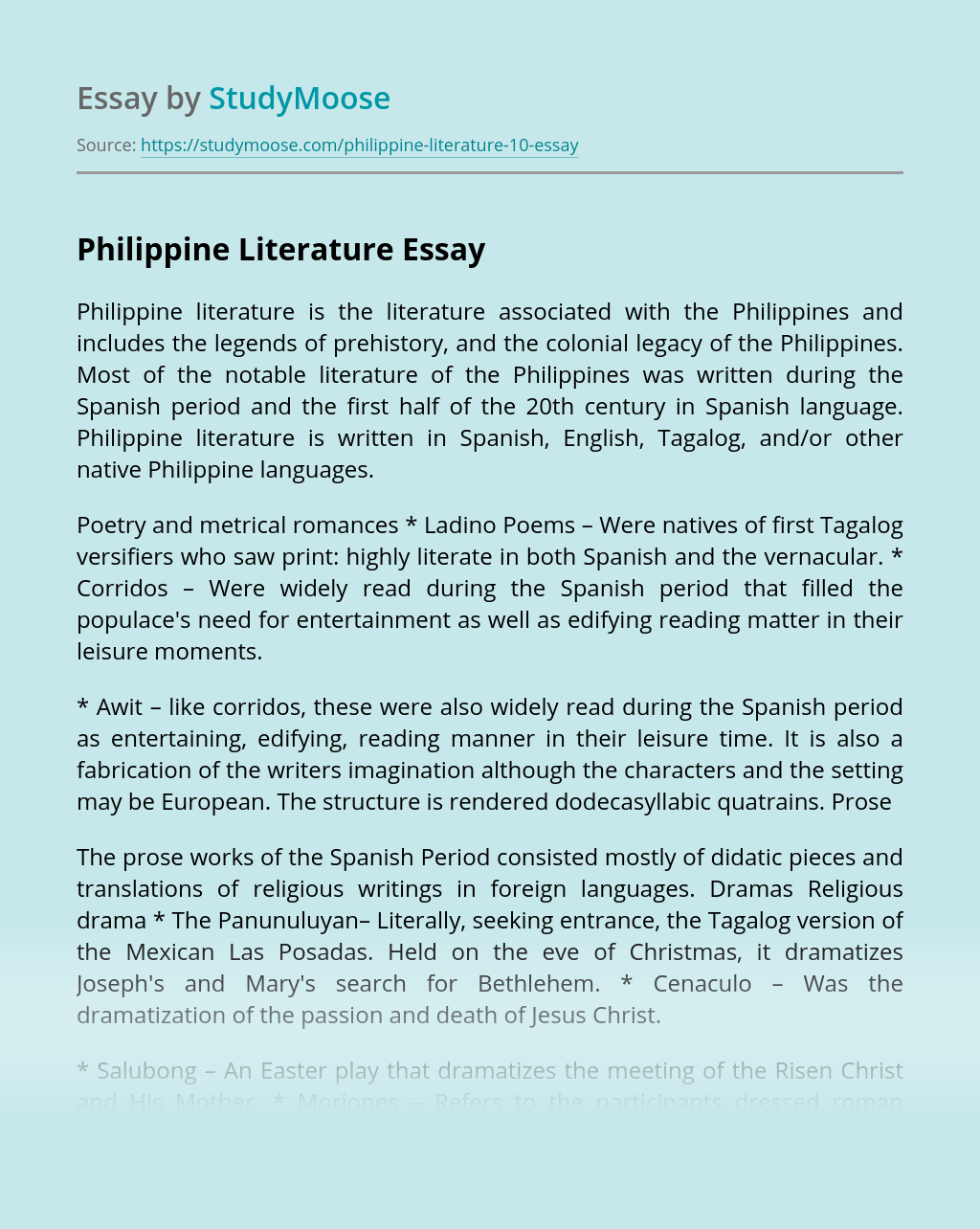 CHAPTER TWO LITERATURE REVIEW 2.1 HYPERTENSION Hypertension is characterized as having a circulatory strain higher than 140 more than 90 mmHg, with an accord crosswise over medicinal rules (Lancet publication, 2015; AHA, 2016). Pulse is the power applied by the blood against the dividers of veins, and the size of this power relies upon the... VIEW ESSAY

Present management practices and theories have evolved from classical management theory created by organisation pioneers, and one such influential pioneer was Henri Fayol. Henri began his career as an engineer in a large French mine and eventually succeeded to become the director, here he realised the lack of resources available to managers for developing management... VIEW ESSAY

Charlotte Bronte’s novel Jane Eyre depends upon the carefully constructed development of its protagonist to forward themes of self-reliance, morality, and freedom. Because the novel’s protagonist, Jane Eyre, is depicted as being a person of moral fortitude and integrity, the abuse she suffers during the early part of the novel at the hands of her... VIEW ESSAY

Looking at McDonald’s Canada from a resource-based view (please refer to the appendix), I believe that McCafé will succeed in Canada. McDonald’s has a plethora of valuable resources in its disposal. Among them, arguably the most important is brand equity. The “Golden Arches” are instantly recognizable to just about everyone in the planet, and that... VIEW ESSAY