Inquirer is the leading broadsheet in the Philippines. In 2001, it launched Libre, a free tabloid distributed in the MRT-LRT area. It was an unprecedented move of a major daily giving away their newspaper on weekdays and recovering cost solely from advertising revenue. Visit the MRT-LRT site and discuss and explain your answers to the following:

Don't use plagiarized sources. Get your custom essay on
“ Philippine Daily Inquirer ”
Get custom paper
NEW! smart matching with writer

It is available in all stations of LRT, MRT and PNR, WGA Eva Macapagal Port in Metro Manila, as well as selected branches of McDonald’s. Unlike other Philippine tabloids, Inquirer Libre seeks to provide commuters access to decent, useful and meaningful news and current events. The income generated from distributing Inquirer Libre comes from advertising. a.What was the underserved and unserved market Inquirer was trying to tap? Underserved – used to describe a place, market, etc.

The Inquirer created first a market niches that identified the needs or wants of the target market that were poorly addressed or not at all by their competitors. These niches showed them the underserved and unserved market which was composed of the commuters of the MRT-LRT stations with 500, 000 average commuters per day, even greater than its intended capacity.

It’s a very diversed public which includes students, office clerks, professionals, etc. who rode trains everyday in their way to school, work, and their destinations. This people were always in a hurry and therefore have no time to read the news. Their age ranges from 18-40 years old.

A popular concept, Blue Ocean Strategy, is considered a subset of market-driving strategy since it entails two additional requirements, other than new demand, that of creating differentiation and being low-cost. One critique about contemporary marketing practitioners is that they are actually market-driven strategists, who may not fully understand the principles, frameworks and concepts of market-driving strategy to grow the brand and the business long-term, hence, their tools are often short-term, brand switching tactics, designed to gain market shares.

If the company’s reward system is aligned with desired strategic thinking, then market penetration, in addition to market shares, would have to be imposed by management as part of its key result areas. Without a market-driving strategy, a marketing plan focusing solely on the served market is incomplete as it risks losing the underserved or unserved markets, many times, even bigger than the current served customers.

Selecta ice cream by Walls is an example of level 1 market-driving strategy. Selecta is the dominant brand of ice cream in the Philippines, but it was not so a few years ago, as it was neck-to-neck with Nestle. Problematic with declining industry demand, the marketers went on to ask mothers what they liked to serve during birthdays and what they actually served. The result of their insighting led them to launch Selecta’s 3-in-1 ice cream, combining three of the favorite ice cream flavors in a tub at an affordable price. With this huge success that turned around shrinking industry demand, they even extended to four flavors with 3-in-1 plus 1, wanting to own the term “3-in-1.” Meantime, Nestle was not able to immediately respond with the new value proposition of Selecta, as they did not have the technology to do 3-in-1.

Mothers were happy they were able to serve what they really liked to serve, children were happy with each of their favorite flavors, while fathers were happy too with a cost-saving solution, improving not just company’s sales but also industry demand in the process, attracting many lapsed customers to return. Waters Philippines is an example of level 2 market-driving strategies where there is a major change in the business system more than the value proposition. (Disclaimer: Waters Philippines is owned by the author.) It markets Waters Bio Mineral Pot, a premium home water purifier—mineralizer—alkaline maker that is leader in its segment. Waters used to be sold in appliance and other retail stores on cash basis in the late ’80s and early ’90s; however, its growth was constrained with its inability to explain the product features and benefits of the high end products in stores.

This led to stores requiring them to go on promotional sale, with the additional problem of the fixed cost of hiring its own promo girls and the automatic termination of these promo girls in five months just when their competency is peaking. Waters then decided to create its own independent direct sales force who were able to go direct to the customers (instead of waiting for them to go to the retail stores) to promote the product, backed with installment plans that nearly matches what consumers typically pay monthly for water delivered by their water refill stations. The installment plans allowed more affordability for the consumers while enhancing the business opportunity for its sales network. Today, Waters Philippines is expanding to Indonesia to tap into a bigger combined market.

Inquirer Libre is an example of level 3 market-driving strategy, which saw a major change in value proposition coupled with a major change in business system. As the leading broadsheet in the Philippines, Inquirer wanted to broaden its readership base to include younger consumers, so in November 2001, it launched Inquirer Libre. The Inquirer’s mother brand gave the new tabloid-size newspaper immediate credibility among its train riders. Libre (meaning “free” in English) is a complimentary morning daily that is heavy in entertainment and with a lot of light, human interest articles designed to be read in 15 minutes. Instead of selling the newspaper, it gave away Libre for free.

Instead of tapping newspaper dealers, it went straight to consumers by way of self-service pick-up stations, hence, avoiding traditional trade margins and sales returns (after all, it’s a free paper). Instead of showing half naked women targeting blue-collar workers, it decided to be a wholesome paper targeting the young white-collar workers. Hence, instead of the usual readers in their 30s to 40s, Libre readers are mostly in their 20s not known to be newspaper buyers. This is an example of category point-of-entry marketing that will eventually turn some of the current Libre readers to broadsheet readers in the future. As can be seen from above, the three levels of market-driving strategy help companies think strategically, looking beyond the value proposition to include their value chain—instead of plainly being better, it strives to innovate by being different.

Many tabloids in the country have been operating for a long time on a formula of scandalous attention-grabbing headlines and photos of sexy girls on the front page. One tabloid, Inquirer Libre, decided to take a different route. Using market-driving strategies,Inquirer Libre presented its product differently while targeting a new market. As explained by marketing guru Josiah Go of Mansmith and Fielders, Inc., market-driving strategies, the latest buzzword in market orientation, call for a breaking of the rules and changing the value proposition or business system or both to grow profit and demand from new and marginal customers. (See previous post here.) Inquirer Libre is a morning tabloid featuring short news and feature articles that can be read in 15 minutes. However, Go points out that unlike the other tabloids, it is given for free at MRT stations. There are no photos of naked women; the total package is wholesome.

The target market consists of office people in their 20s and 30s on their way to work. “Instead of tapping the traditional newspaper dealers, Libre’s new channel is in the various train stations. This means no dealer trade margin and no sales returns,” says Go. Inquirer Libre also has a classified ads page that runs every Thursday, a new reason for the target market to read it. As a result of the market-driving strategies (give it out for free, go wholesome, go direct to the market at train stations, offer classifieds), Inquirer Libre is the leading free tabloid in Metro Manila and hit its ROI fast. Are you looking for a way to survive the cut-throat competition? Market-driving strategies may be the answer.

A TOTAL of three—that was the number of enrollees R. A. Gapuz Review Center (RAGRC) had back in 1994 when they opened, offering review classes for those taking government board exams. But this did not deter founder Ray Gapuz from persevering in his then newly established business. Nowadays, their number of enrollees are in the thousands, so much so, that review and coaching sessions have to be scheduled in hotel ballrooms, mall cinemas and even big events places such as the Philippine International Convention Center and Araneta Coliseum. And get this—review classes are also beamed via satellite to other venues in the country. Of course, online review courses are also offered. Today RAGRC is the market leader among nursing review centers, getting the lion’s share of 40 percent of the market among 55 documented review centers, according to its website.

Just how did RAGRC succeed? Josiah Go, marketing guru and chairman of Mansmith and Fielders, Inc., points to market-driving strategies applied by the company. “Market-driving strategies define how a firm will embrace innovative changes in the industry logic and business system to grow its profit and industry’s demand from marginal and non-customers,” says Go. To do this, innovations may be implemented in the value proposition (what the company may offer customers), the business system, or both. 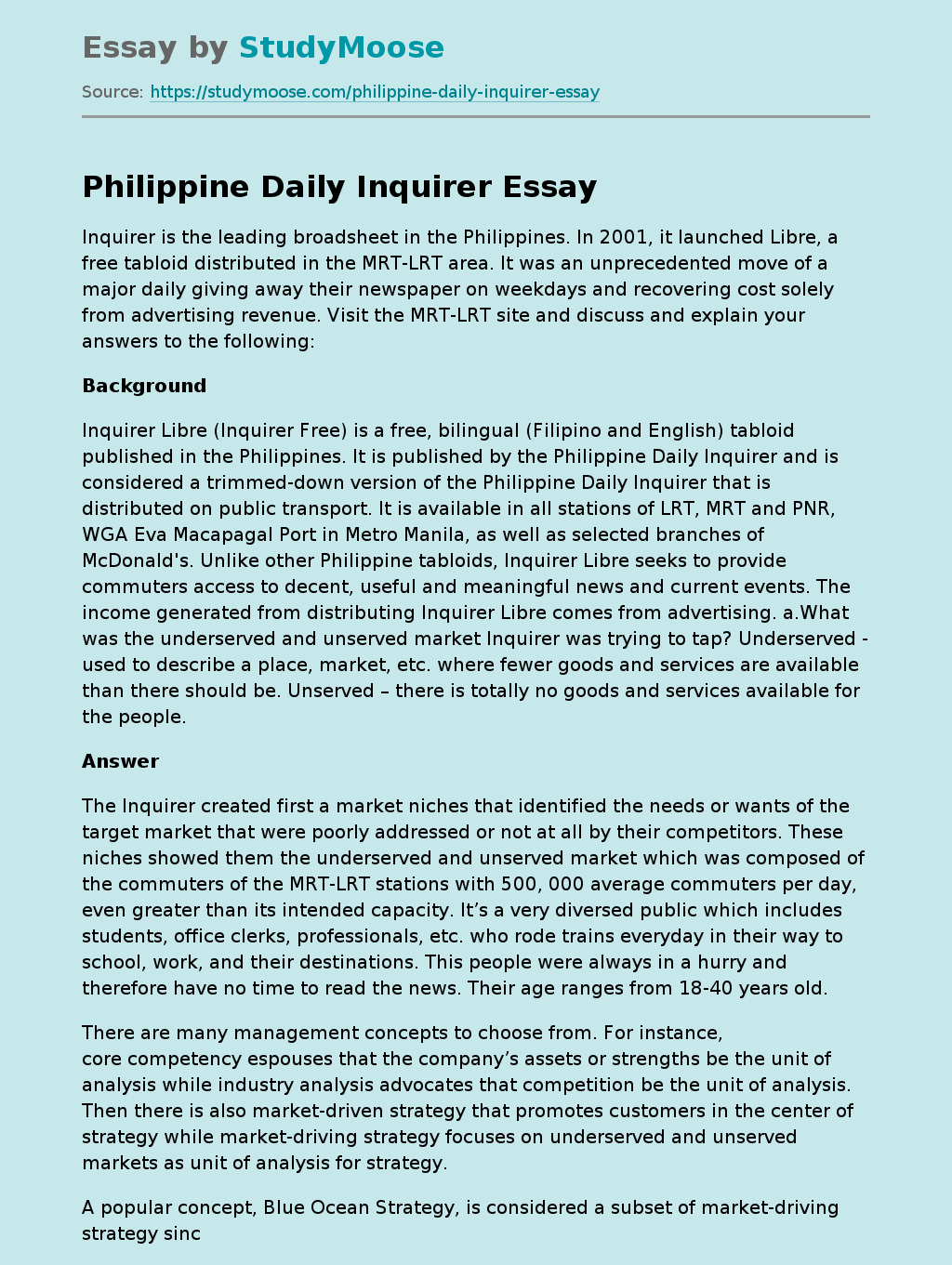