Culture is a person’s social heritage or the customary ways in which groups organize their ways of behaving, thinking and feeling. It is transmitted from one generation to another through language. It presents people with ways of relating to others to their surroundings. Culture represents the designs or recipes for living, the interrelated network of norms and roles. It encompasses modes of thinking, acting, and feeling found in a society and includes everything an individual has acquired as a member of a society.

Don't use plagiarized sources. Get your custom essay on
“ Philippine Culture ”
Get custom paper
NEW! smart matching with writer

From our culture, we learn to determine what behavior is appropriate and what is inappropriate, what is good and what wrong behavior is, what are allowed and what are prohibited, and even which smells are pleasant and which are not. One of the cultures that this paper investigates is the Philippine Culture. II. Discussion The Filipinos of the last quarter of the twentieth century are the sum total of the social strains and cultural elements that are Aeta, Indonesian, Malaysian, Hindu, Arabian, Chinese, Spanish, Americans; in short, the Filipinos are cosmopolitan in nature.

They are both oriental and occidental. The Aeta, Indonesian, Malayan, Hindu, Arabian, and Chinese elements are the foundation of the Filipino’s oriental nature—the core of their moral and social conscience and cultural identity (Carino, 2008). From early trade and commerce and intermarriages between the Filipino ancestors and Chinese and Hindu merchants, as well as the wave of settlements of other Asian neighbors into the country, the oriental side of the Filipino has evolved.

Spanish and American culture composes the Filipinos’ Occidentalism. Through centuries of colonial rule, the Spanish influence found its way into their religious, political, economic, and educational life, as well as into their language, dress, and diet. In addition, Filipinos are also inclined to status-oriented behavior, shame, debt of gratitude, self-esteem as the desire for smooth interpersonal relations (Carroll, 2002). All of these interweave with one another and add up to an accentuation of authoritarian in the Filipino.

Filipinos are also shame-oriented, that is, their major concern is social approval, acceptance by a group, and belonging to a group. Their behavior is generally dependent on what others will think, say, or do. Their desires and ambitions depend on what pleases or displeases others. Being bashful still controls much of the Filipino’s behavior (Poethig, 2005). Moreover, the Family Code of the Philippines defines marriage as a special contract of permanent union between a man and woman entered into in accordance with law for the establishment of conjugal and family life.

No marriage is valid in Philippine society unless the following requirements are present: the legal capacity of the contracting parties who must be a male and a female, and consent freely given in the presence of the solemnizing officer (Carino, 2008). The minimum age for marriage is 18 years but parental consent is necessary for those below 21 years. On one hand, the basic social units of Philippine society are the nuclear family, which includes the father, mother, and children, and the bilaterally extended kinship group, which embraces all relatives of the father and mother.

Other important relationships are those of the siblings and the cousins and of the grandparents and grandchildren. The Christian Filipino family has often been described as a large family group, usually including three generations in the same home, which is, “extended” in terms of membership. Thus, the Filipino family is frequently said to be patriarchal in authority. Furthermore, the national language is Filipino, a formal version of Tagalog, an indigenous language. English is widely used in commerce and education. Most of the people are able to speak English. Only a few are able to speak Spanish (Poethig, 2005).

Of the numerous indigenous languages—based mainly on Malayan-Polynesian languages—there are nine major ones. Of these, the most widely spoken are Cebuano, Tagalog, Ilocano, and Hiligaynon. III. Conclusion As a conclusion, in terms of residence, the Filipino family may be said to be bilocal and neolocal. The residence of the more influential and affluent family is likely to be the place of residence of the newly married couple. Where the girl’s parents are wealthier than the boy’s parents, the couple is likely to choose the residence of the girl. As a rule, Filipinos practice endogamy.

One is likely to marry within one’s locality grouping, social class, religion, or nationality grouping. The rationale is that the adjustive process is easier when one marries within one’s group than when one marries outside it since one is already aware of its folkways and mores. Reference: Carino, Isidro (2008). A question of relevance. Philippine Panorama, July 5, 28-30 Carroll, John J. (2002). The focus of national renewal” Grassroots or elite. The Incumbents pf the system? Philippine Sociological Review 20 (4) October 1: 407-411 Poethig, Richard (2005). The Philippine urban family. St. Louis Quarterly 63-64 (September-December): 375-396 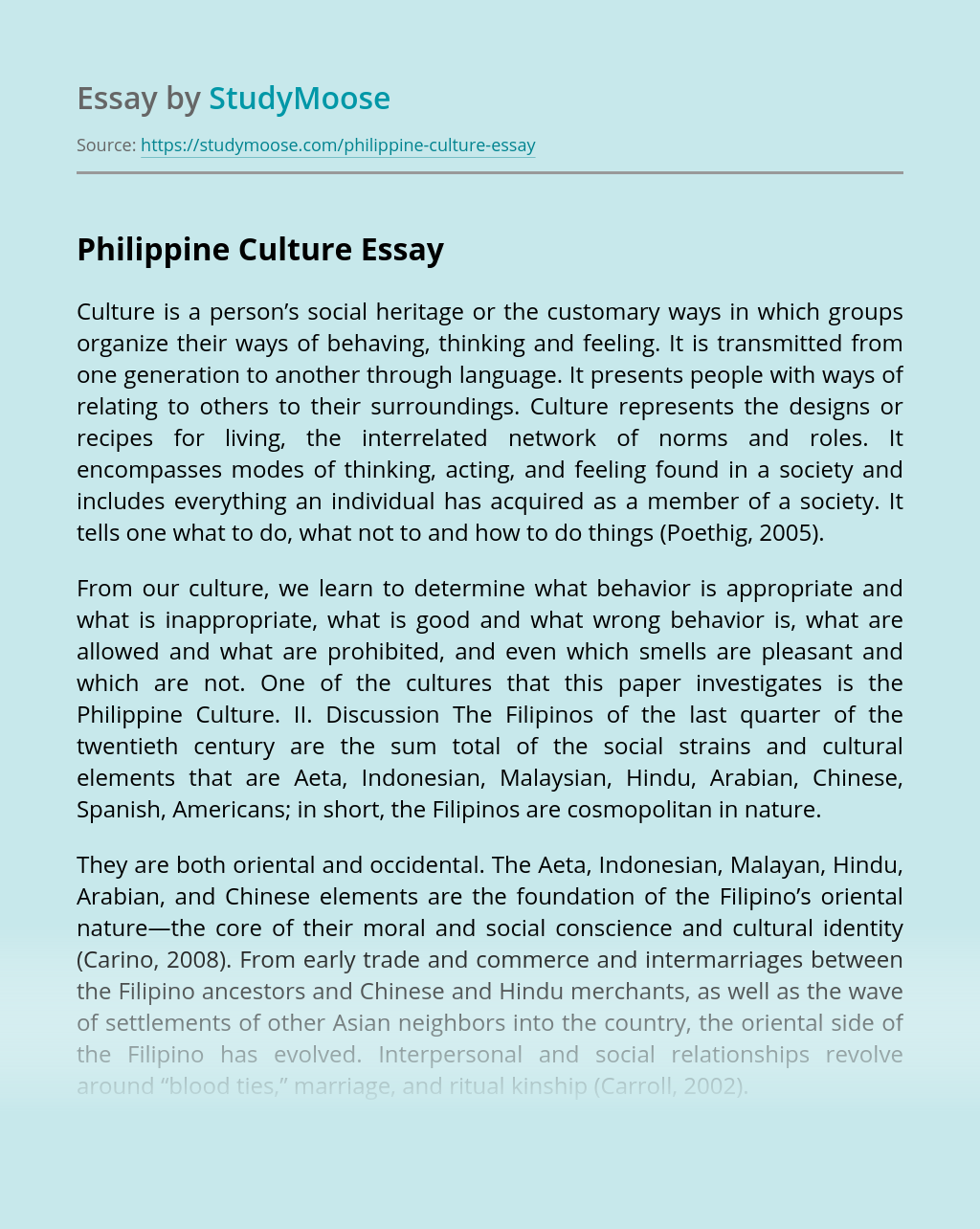