What do you think when you imagine a man walking on a wire higher than 10 stories high? A French wire walker named Philippe Petit walked over many structures from Notre Dame to Sydney, Australia, to New York. Through the things he has done, people may think he is crazy. However, Petit and I think that there is nothing crazy about what he has done.

I believe the people/society thinks he is crazy. They see this man up hundreds of feet walking across a wire over famous architectures.

Notre Dame, he walked over the cathedral between the two bell towers. Sydney, Australia, he walked the wire across the Sydney Harbour Bridge and slowed traffic as people watched the magnificent show that Petit has put on. Later, Petit was driven to a local mental hospital for the actions he has performed. Although he went to be evaluated for possibly being crazy, they just realized that he wasn’t crazy at all, but just thirsty.

Once more he walked between the Twin Towers approximately 1,368 feet in the air.

Petite however, doesn’t think he is crazy; he is just doing something he loves. It was a life challenge to walk the towers before they were erected. He saw they were being built in America while in a dentist office with a hurt tooth in France. So what does he do, he gets well prepared and trains for the next several years. Petit has said “Life should be lived on the edge of life.

You have to exercise rebellion: to refuse to tape yourself to rules, to refuse your own success, to refuse to repeat yourself, to see everyday, every year, every idea as a true challenge- and then you are going to live your life on a tightrope.” Petit lived young, wild, and free, he enjoyed what he has done and knew the possible consequences if he were to possibly mess up. For then he quotes “If I die, what a beautiful death.” Because he has already accomplished so much doing what means the most to him.

As for me, I believe Petite was a perfectly sane person. Just because he walked a tightrope 1,368 feet up doesn’t make him crazy. He prepared in everyway, mentally on how to get in and set up for this walking, physically working on balance and juggling to push his limits to be good at what he does. You don’t learn things like this over night, it hard work and dedication. The people even had him evaluated to see if he was a lunatic, but simply found that all his agnostics proved he was sane. Like Steve Irwin, do you think he is crazy? Steve Irwin wrestles alligators, crocodiles, snakes, and other wild animals. He prepared for his kind of work, schooling, learning how to read animals, what they tend to do when aggravated. Yes, he went after dangerous animals but he knew what he was doing, just like Petit. It was a dangerous thing to be doing, but he was prepared to do so.

So no, Philippe Petit isn’t crazy, just well managed, well trained, and well prepared for what he has done. Petit passed an evaluation to test if there was something wrong with him. Also, because what he does is dangerous doesn’t mean he isn’t right in the head. Just look at Steve Irwin and think twice before judging. He brought entertainment to the people, inspiration that anything is possible. Petit is just another human being that chased a dream, and accomplished his goal. 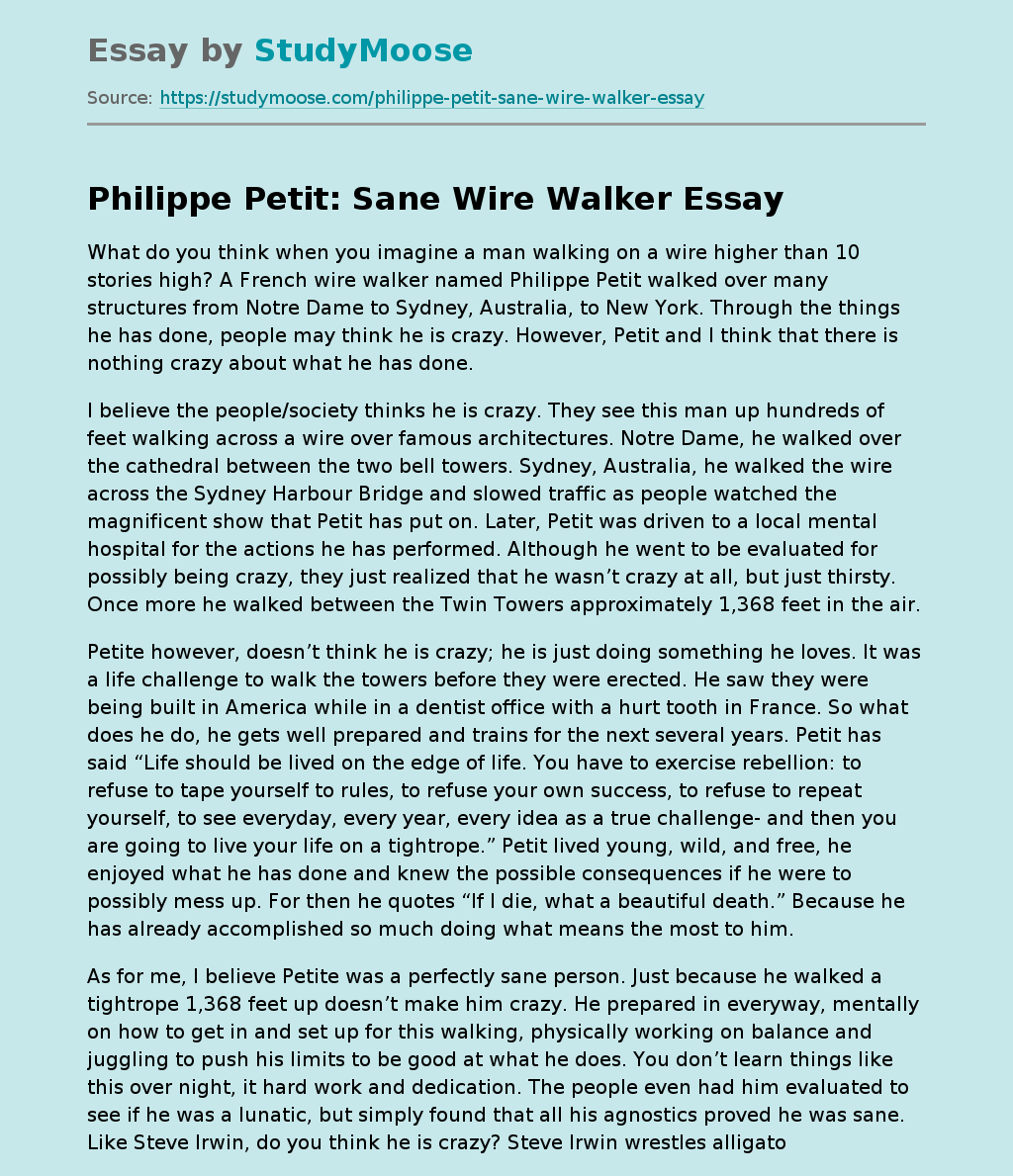