Social and personal factors in one’s life influence and change our own sense of belonging. Peter Skrzynecki in his suite of poems “Immigrant Chronicle” and J.R.R Tolkien in his 1937 fictional novel “The Hobbit” both explore how social and personal factors influence an understanding of acceptance and belonging in their respective texts. Both Peter (being the persona) and Bilbo question in what social and personal situation can we belong. Skrzynecki uses the displacement of European migrants, in particular Polish migrants, to demonstrate how a personal connection to one’s homeland and society at a time of insecurity and discomfort can form a sense of belonging with others.

Don't use plagiarized sources. Get your custom essay on
“ Peter Skrzynecki – Belonging ”
Get custom paper
NEW! smart matching with writer

As with many migrants the Skrzynecki family was forced to flee their beloved Poland for personal safety at a time of war. “Migrant hostel”, through the use of simile, demonstrates how those of similar culture band together in times of need to form a sense of belonging to each other as a community.

“Nationalities sought / Each other out instinctively- / Like a homing pigeon” indicates a sense of cultural identity from a previous time allowed for the migrants to connect and form a sense of belonging and community in such an unfamiliar place.

A different sense of belonging between the immigrants is highlighted in the juxtaposition “To pass in and out of lives / That had only begun / Or were dying” which finishes the poem in a suitably depressing tone because for the migrants, there is no sense of connectedness to the Australian society and the sense of impermanence only exacerbates this feeling.

Skrzynecki captures his lack of connection to the people by demonstrating the transitory nature of the hostel through a bird motif and how the hostel had a sense of impermanence. The attitude of the non-migrants is also demonstrated by the boom-gate simile “As it rose and fell like a finger / Pointed in reprimand and shame”. While the gate is personified it can be used as an extended metaphor for the rest of Australian society and its attitudes towards the new migrants, physically separating them from the rest of society by placing them in a rural, prison like, hostel. The terms “reprimand and shame” present a negative image to the responder, implying that the non-migrant society believes that the migrants deserve this treatment. This sense of unacceptance leads to his questioning of who he is in a time of social change and influences his personal sense of belonging.

Tolkien’s “The Hobbit” reaffirms that social and personal factors can have an influence on one’s sense of belonging. The protagonist, Bilbo, experiences maturation during a yearlong wild adventure that reaffirms his sense of belonging at his home and with his personal comforts. The fictional adventure takes Bilbo on an adventure with a group of dwarves that believe that he is “more trouble than use” (Chapter 6, page 107). This attitude doesn’t deter Bilbo however but instead forces him to continue in the group until he is accepted within the micro society, by which time he is far from home. The third person narrative that leads the responder on Bilbo’s personal journey allows for an omniscient perspective that allows the responder to gain an intimate knowledge of the characters and the social and personal factors that help form their sense of belonging.

The linear timeline that spans exactly one year allows for the plotline to develop alongside Bilbo’s maturation with his ultimate sense of personal acceptance occurring at the end of a year by his return to the Shire, his “home” with the use of the term home to indicate social and personal connection. His companions by this time have also reclaimed their homeland, fulfilling their desire to return to the place of ancestral social belonging. At the end of Bilbo’s tumultuous journey most characters have taken time to reflect on where they belong in society and have accepted their place in the fictional world.

Skrzynecki’s enigmatic poem “Ancestors” reflects on a connection to ancestors, how it forms a sense of acceptance and how it influences a sense of personal belonging. This reflection occurs at a critical early moment within his suite of poems when Skrzynecki has left school and is beginning to look back on his past. Skrzynecki uses a fantastical setting in order to demonstrate his lack of connection to the “faceless men” of his past. The wish to connect with the men of his past in order to continue his future is reminiscent of Thorin’s band of dwarves in Tolkien’s novel. These faceless men and the use of the imagery of “shadows” confirm the responder’s sense that Skrzynecki has little personal connection to his ancestors. His ancestors are shown to dwell in a place “Where sand and grasses never stir /
The wind tastes of blood”, A metaphor used in order to reinforce the physical disconnect between this world and the persona and to further demonstrate Skrzynecki’s familial but not personal connection to these men. Skrzynecki casts doubt upon whether the time spent wanting a connection will ever satisfy the need to meet them in the rhetorical question “how long / Is their wait to be?”. The dream-like poem suggests that the cultural and familial connection one’s predecessors isn’t enough to feel secure in one’s heritage and that not having that security can lead to a lack of satisfaction, clearly demonstrated in the simile “Your tongue dry / As caked mud”. A connection to one’s ancestors can dramatically influence a person’s sense of belonging and acceptance of themselves and their cultural heritage.

As evident in both Skrzynecki’s poems “Ancestors” and “Migrant Hostel” and in Tolkien’s “The Hobbit” social and personal factors can influence a person’s sense of belonging. 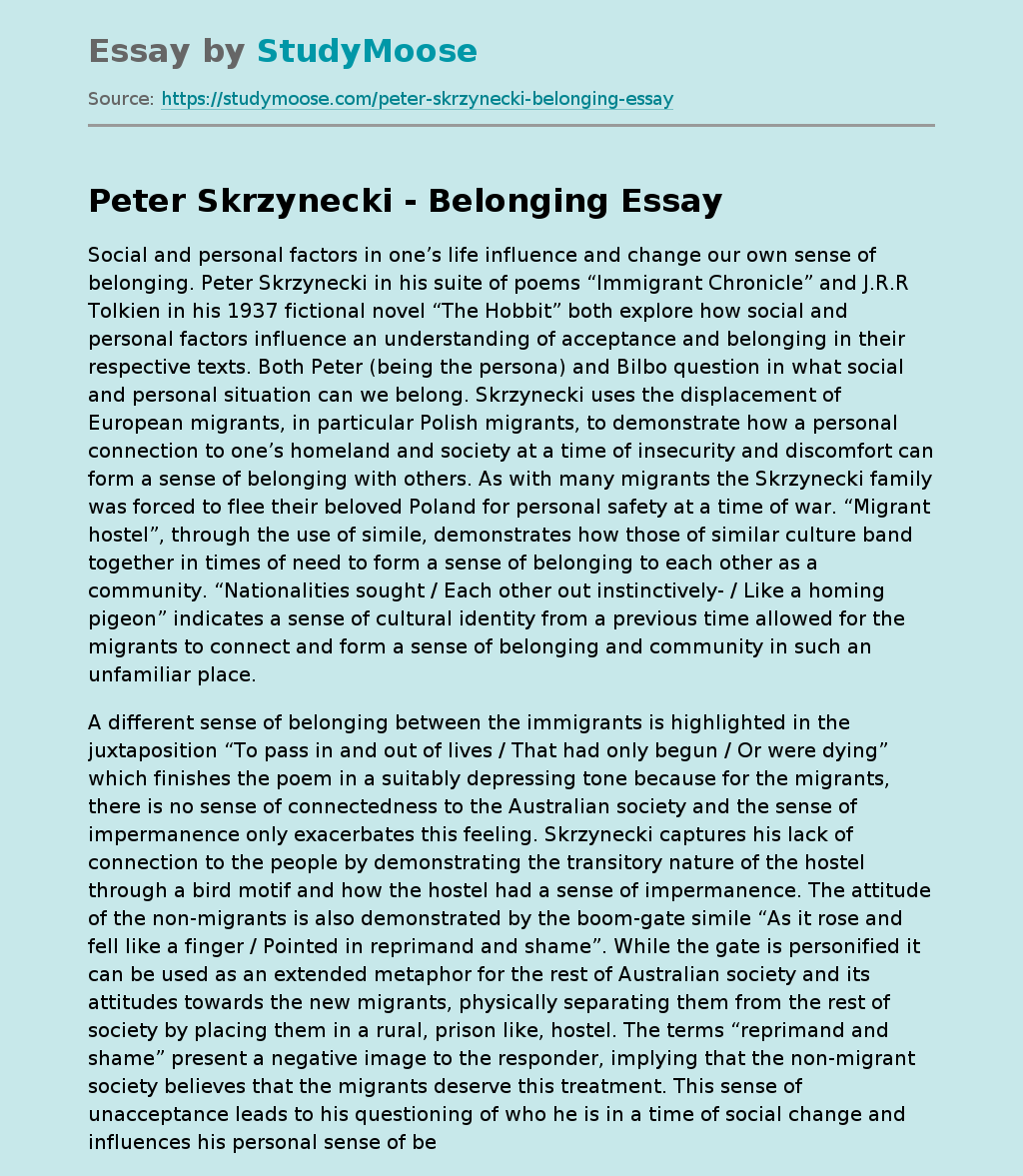