Don't use plagiarized sources. Get your custom essay on
“ Peter Singer, The Visible Man analysis ”
Get custom paper
NEW! smart matching with writer

When the people are blind to the actions of their government, the government is given free reign to enact oppressive laws, abusive foreign policies, ecologically unsound corporate regulations, etcetera.

The right to privacy leads to power. In order to empower the population of a nation, they must have the freedom to act without fear of being abused by those in power. When the government is given too much power to see into the lives of the people, it tends to abuse this power and use it to hunt down petty criminals and innocent people who give them an excuse to accuse them of breaking a law. Laws are not inherently moral, and breaking laws is not inherently immoral. Laws exist because the government wants them to, but if the people choose to be civilly disobedient by breaking laws that they feel are oppressive, they should be able to feel safe doing so. For instance, the war on drugs has harmed many innocent people.

Drug addicts are not helped by going to jail for life, they need to be rehabilitated and led how to live a healthy life. Addictive substances are a social problem not a moral failure of the people who fall victim to addiction. The government punishes people with the disease of addiction in incredibly abusive ways. When crack cocaine was first introduced, the sentencing for possession of crack was ten times that of cocaine. This was based on an unscientific claim that crack was ten times as dangerous as powder cocaine. Due to this fluke, there are still people serving life sentences in prison for succumbing to a cheap addiction. This is an example of the government’s failure to use its power constructively. If the people feel the need to withhold information from the government in order to avoid unfair punishment, I believe we have that right. The government does not have the right to pry into our lives and find all of our illegal activities because illegality does not equate to immorality.

In Saudi Arabia, it is illegal for women to leave their homes without being accompanied by a man. Does this mean that the government has a right to arrest women for being unaccompanied? In doing so they sacrifice the autonomy of their citizens and violate human rights. Similarly, our government arrests teenagers for smoking marijuana, putting these youths at a disadvantage by giving them criminal records, getting them kicked out of school, and interrupting their studies with jail or prison time. In Texas, a teenage boy faced life in prison for baking cannabis oil into brownies. The authorities counted the entire weight of the brownies as marijuana, rather than measuring the amount of oil that he used to bake them.

Hiding federal activities from the people is unacceptable, because those activities are funded by taxes, which are paid by the people. If it is acceptable for the federal government to withhold information from taxpayers, then it should be acceptable for us to refuse to pay taxes. Why would we subscribe to a service if we are unaware of what it is that they do? We should not be required to pay for something if we do not know what we are paying for.  Residents of a democratic nation have the right to ‘sousveillance’; a term coined by Singer. However, the government should not have that same right when it comes to surveilling the population. Social media should remain a free forum to express political opinions, expose injustice, converse with friends, and share experiences without fear of the government.

The only reason it would be acceptable to violate someone’s right to privacy, is if they are seriously suspected of harming another individual, because when someone violates another’s rights, their rights become null and void. It is important for the people to watch the government to prevent tyranny, and it is important for the government to allow its citizens privacy to allow open and free communication. The reasons for this dynamic are the fact that democracies only flourish when the people are in control of the government, the right to privacy leads to power that the government has abused in the past, and the people should have the right to monitor the entity to which they pay taxes. In all, democracy is difficult to maintain and requires the civic involvement of its citizens, or else tyranny is likely to ensue. 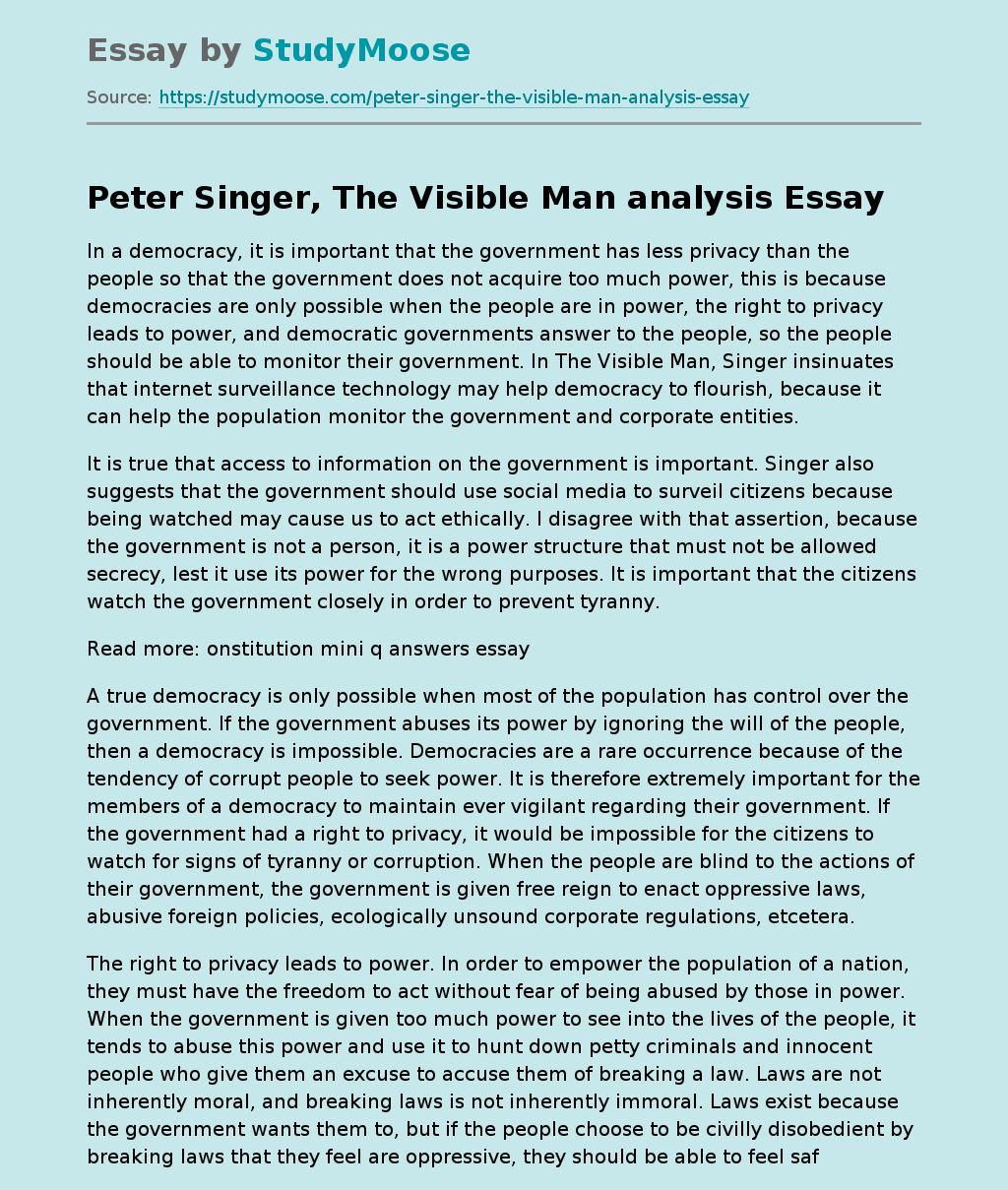