PepsiCo is the largest selling beverage the world over, of course after its arch rival Coca Cola. It accounts for a 37% share of the global beverage market, and therefore they need to understand each and every country’s market in order to stay in line with their PESTLE situations. Pepsi is a big brand, currently holds the 23rd place in the Interbrands report of the World’s Leading Brands. Their advertisements feature major celebrities and athletes like David Beckham, Robbie Williams, Britney Spears, and Michael Jackson etc.

Don't use plagiarized sources. Get your custom essay on
“ Pestle analysis by pepsico ”
Get custom paper
NEW! smart matching with writer

Their market reach is also very diverse, as they’re present in almost every country from the US to New Zealand. Their PESTLE analysis is given below: Political:

Pepsi is a non-alcoholic beverage and is therefore regulated by the FDA. So, they’re supposed to maintain a firm standard of the laws set out by the FDA with consistency. Also, many different markets across the world have different set of regulations that are either relaxed or are either stringent.

There is competitive pricing by Pepsi’s competitors and that is one factor that Pepsi has to keep in mind at all times. The political scenario also matters greatly as there can be some civil unrest in certain markets or due to inflation the sales of the product can fall. Most importantly, cross border situations are starkly different therefore Pepsi has to stay in line with all those policies and changes so that they can adapt to all those changes accordingly. Economic:

As the recent economic downturn has plagued the economy, companies had to restructure their sales and marketing campaigns greatly.

Also, with diminishing profits they had to undergo downsizing internally and re-think upon how to penetrate the market. Economic conditions have the highest influence on a business, regardless of what trade it is in. Though, in Pepsi’s favor, the economic downturn that started in 2008 resulted in increased sales of its beverages mainly as people were being laid off from jobs, they were spending time with friends and family or at home. Social:

Social factors greatly impact Pepsi, as it’s a non-alcoholic beverage it has to remain in line with the strict and stark differences of cultures the
world over. Also, Pepsi has to communicate its image as a global brand so that the people can associate it with themselves as something that connects the world together. Usually, the social implications are seen in marketing campaigns for example certain countries have religious festivals, so Pepsi has to keep in line with all those festivals in order to understand the psyche of their market and how they can cash upon the opportunity. Technological:

With the advent of the new age in technology, companies have completely integrated themselves with all the recent changes that have taken place. To mention a recent trend that has greatly picked up and something that almost every business is turning toward is Social Media. The social media explosion has allowed for increasingly interactive engagement with the consumers with real time results so Pepsi has to stay ahead of all the developments that take place with keeping in view how the youth of today utilizes technology for their benefit and how can Pepsi reach them in order to keep on increasing brand recall and brand engagement. Legal:

There can be many legal implications upon the beverage industry. I would cite one very famous incident took place in India, where Pepsi was accused of using contaminated water, given a lab test that was done upon the water flowing into the Pepsi factory that was located nearby an industrial estate. A massive recall was issued for the products from shelves and then the product was tested costing the company many billions of dollars upon the tests as India is a very major market. Environmental:

These factors can affect Pepsi, but not immensely alter its trade and profit generation as these factors affect agri-businesses much more directly. 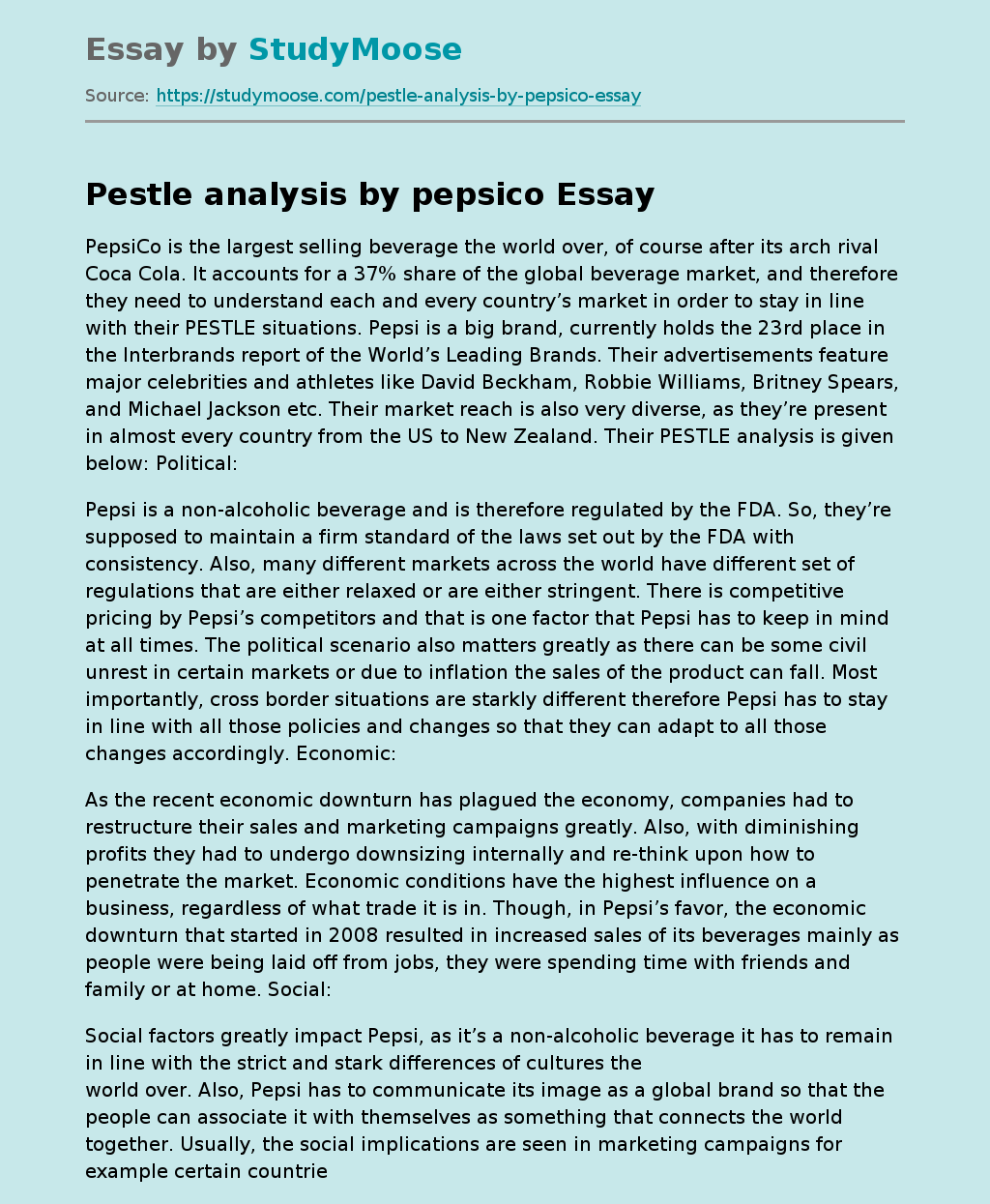