Persuasive Essay: Men and Women are not Equal

Men and women are not equal. This phrase has been floating around in one way or another for hundreds of years it is only recently that the United States got rid of this long–standing discrimination. There are many obvious and not-so-obvious reasons why women should be considered equal to men.

It is a common misconception that men are smarter and more competent than woman. The reason why this misconception is so popular because men have enjoyed rights that women have been forbidden.

Don't use plagiarized sources.
Get Your Custom Essay on Persuasive Essay: Men and Women are not Equal Just from $13,9/Page

In the United States women are paid 22 percent less than man. This inequality in wages can only be attributed to a preconceived notion of the value of women. Whether or not it is intentional, it is the unfortunate reality. Education, experience, and potential seem to have no effect on this inequality.

Companies should appreciate the unique impute and experiences of women because they differ so vastly from that of men. Women can bring a new point of view and mentality to the company that will ultimately be beneficial to its end goal.

In fact, there are occupations for which women could arguably be better suited, such as therapists and teachers. The natural nurturing traits that women possess make them ideal for occupations that demand support and encouragement.

The women’s rights movement in the United States did away with the blatant vialotions of women’s freedom. Unfortunately some countries in the world still have not taken the necessary steps to mirror the United States. Arab countries, in particular have yet to make the change. Women cannot leave their homes without the permissions of they’re husband, they must wear a veil to cover up most of their faces, they cannot own property, or have a voice in society and government.

The most obvious and logical defense of women’s freedom is the simple fact that they are human and deserve every right that comes with that title. They should not have to fight for their freedom. It is something that is given to all humans at the moment of their birth. With regards to countries that do not respect the freedoms, they do not realize that having such an archaic view of women reflects badly on them as a country. It suggests that they are not willing or able to move forward with an evolving world.

As a result of preconceived notions some women have even become to think that they are inferior to men. Because of this, domestic violence has become a women’s issue, more specifically unreported domestic violence. This is an issue that need to be addressed because of two reasons. The first is to draw attention to the unreported incidents and to persuade these victims to acknowledged their rights and realize their worth. The second is to expose these unreported attacks as a violation of women’s rights as opposed to a typical irrelevant crime.

In conclusion, the modern day women are constantly fighting for her place in society. Whether its salary, freedom, or identity the struggle is a reality with which she must live. However her resilience and perseverance are among the reasons why she deserves to enjoy the rights she possesses. Without a doubt she will overcome any remaining prejudices and obstacles left in the world to be recognized as an equal.

Persuasive Essay: Men and Women are not Equal. (2016, Sep 08). Retrieved from https://studymoose.com/persuasive-essay-men-and-women-are-not-equal-essay 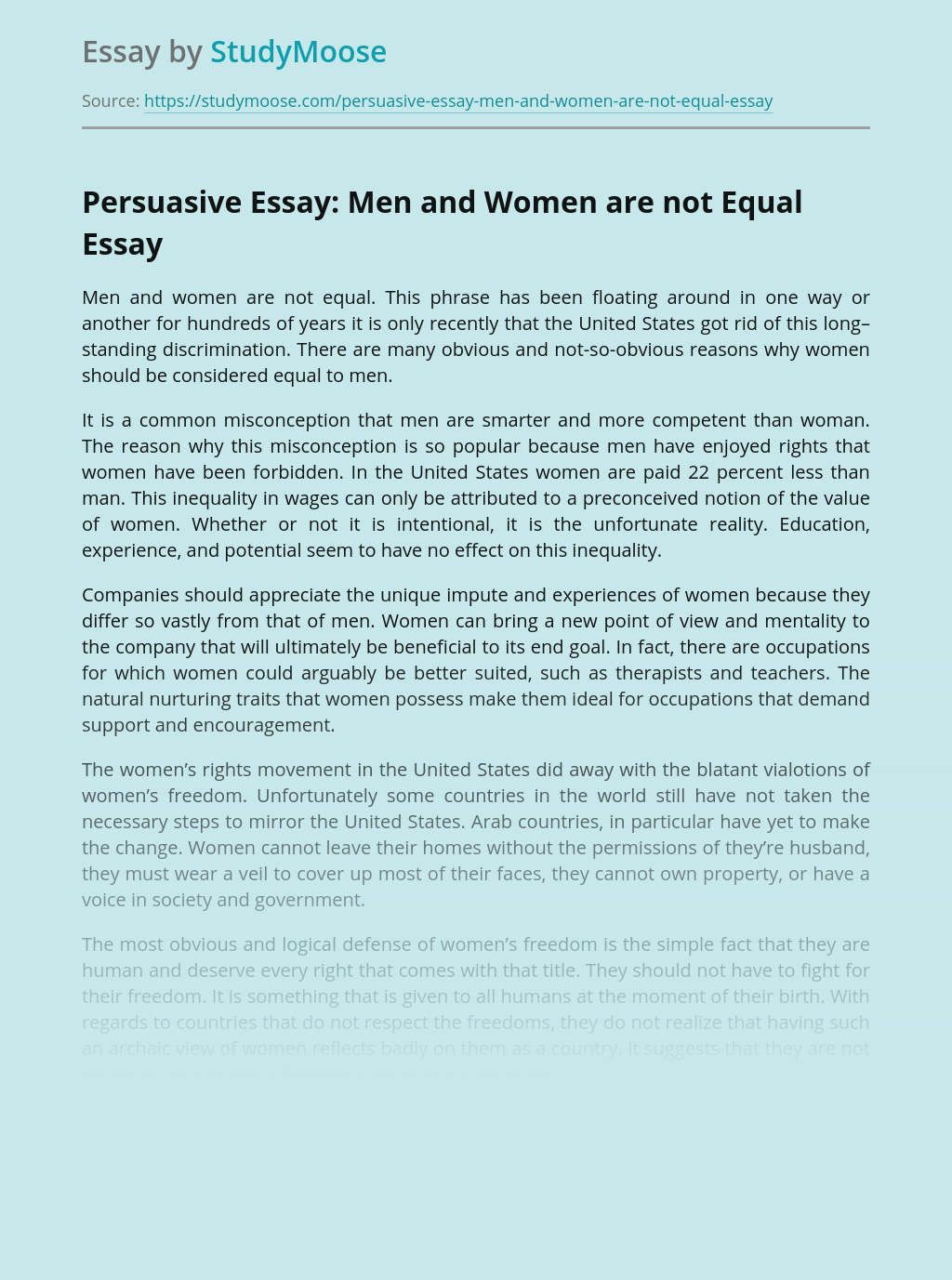 Promote Equality and Inclusion in Health

1. Define what is meant by: (1.1.1) A. diversity diversity means variety people varied in lots of ways their age, beliefs, height weight in a health care setting men and women vary in age, each having their own personal experiences and beliefs, clients also have their own eating habits, clients are also diverse in their...

View sample
Promote equality and Inclusion in health and social