In Italy, France, and Spain it’s 16. In New Zealand it’s 18. In the United States it’s 21, and in places such as China and Portugal there isn’t one at all. But what is this I’m talking about? It’s the legal drinking ages of countries around the world.

Many people argue that the drinking age should be lowered to 18, just look at our surrounding countries with lower drinking ages. Some argue that the United States has the most careless drinkers with little self-control when it comes to alcohol usage, and some may even say that this is because we were not exposed to alcohol as children like the Germans or French are.

Don't use plagiarized sources. Get your custom essay on
“ Persuasive essay- Maintaining the Drinking Age ”
Get custom paper
NEW! smart matching with writer

Yet, how can you disregard the fact that we have “careless drinkers” and still want the drinking age to lower to 18? I believe the drinking age should remain at 21 for the benefit of our society.

One argument brought up for lowering the drinking age is that we mature based on experience rather than time, and that there may be little difference between ages 18 and 21, so why not just lower the age to 18.

Although that is a good point, take this into consideration. Are freshman in college really as experienced and mature as students ready to graduate? Maybe some are, but “some” means there are exceptions. Do you really want those “exceptions” to be exposed to drinking if they are not ready for it? Because those same “exceptions” will be the ones causing accidents that could have been avoided.

If we allow these people to drink, we are not allowing them to mature at their rate. Instead of taking chances, why don’t we make sure we give everyone in this age group a chance to “grow up” and reach their full potential???

Let’s look at this another way. In 1987, the United States raised the drinking age from 18 to 21. Since then, the rate of teenage accidents related to drinking has lowered dramatically. The reality is that well over 300,000 people have died in the United State as a result of drunk driving in just the last 20 years.

Although people argue that 21, the “magic number” of our society, was pulled out of thin air as the suitable drinking age…here’s the reasoning behind
it. The drinking age originally started at 21, but in the 60’s and 70’s it slowly lowered to 18. Yet states recognized a huge increase in highway deaths due to teens affected by these laws. Then states realized that before the change, the roads were much safer. This is ultimately why 21 was the suitable number.

But keeping the roads safe was the only reason for raising the age. This may be cliché, considering we hear this from our parents all the time, but our brains don’t fully develop until around the age of 20. In fact, the last thing that develops is involved with the ability to plan and make complex judgments. Underage drinkers will impair their brain from the skills they rely on for learning. So, in case there wasn’t enough pressure to perform at school, at your job, or just in life in general, alcohol can prevent you from the use of your own brain.

I believe that lowering the drinking age would accomplish nothing, yet backfire in a way that we could have prevented. As Mothers Against Drunk Driving says: Underage drinking is more than a “rite of passage.” It’s an invitation to clouded judgment, limited control, and consequences that can last a lifetime. 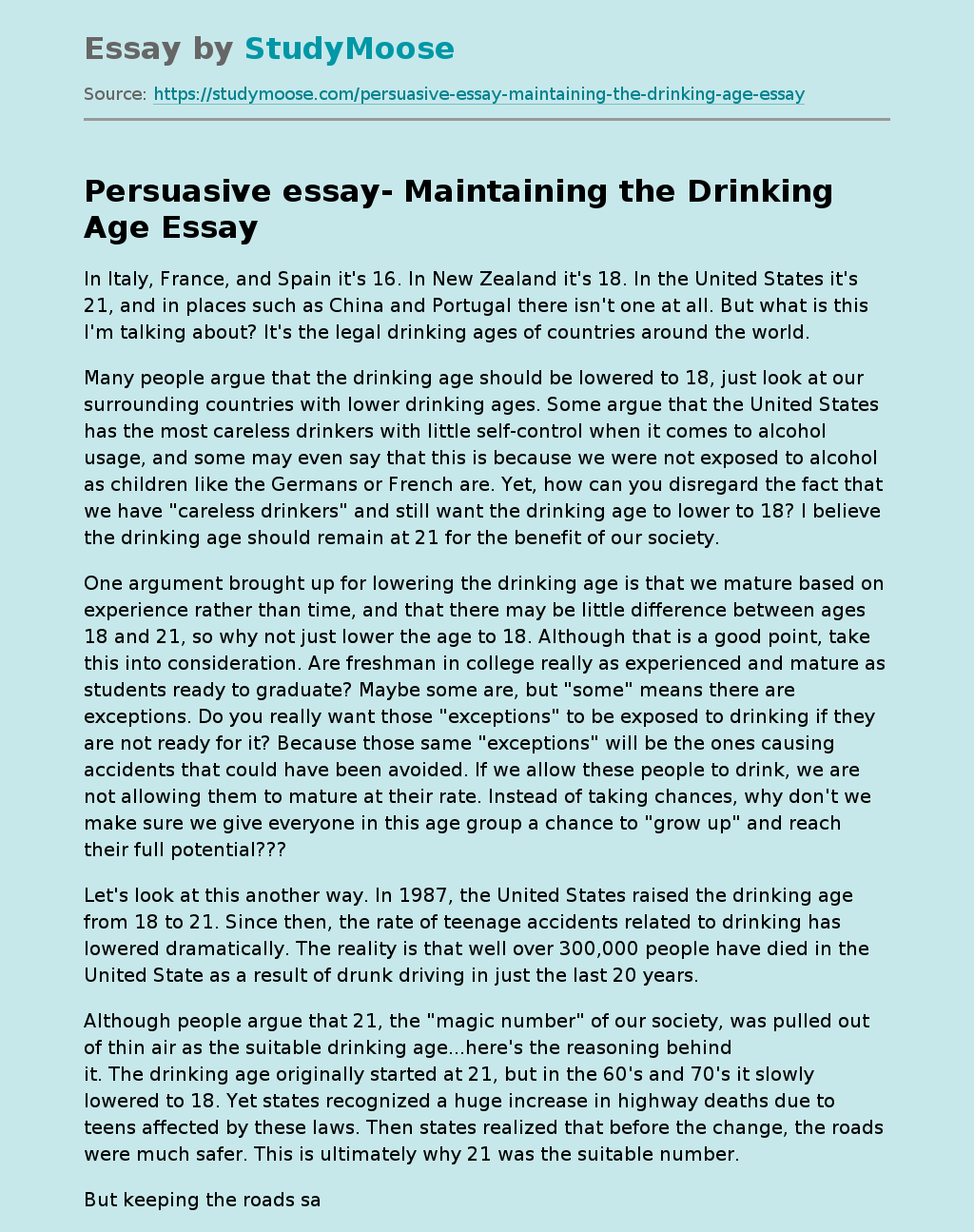