Personality of Character in The Harness

Characters are what draw the reader into a work of fiction. Analyzing another person’s thoughts and feelings is fascinating, so it is crucial that an author depicts a complex character that will occupy the reader’s minds. Many characters surprise us through the course of a story, developing in unexpected ways. An author can use various literary devices to reveal their characters gradually. Hernando Téllez wrote a short story called ‘Just Lather, That’s All’ that contains two contrasting characters.

Don't use plagiarized sources.
Get Your Custom Essay on Personality of Character in The Harness Just from $13,9/Page

‘The Harness’, which was written by Ernest Buckler, also includes very strong individuals. They are both portrayed in detail and they leave no doubt in the reader’s mind of the nature of these characters. The method of these depictions varies considerably while accomplishing the same goal.

Dialogue is a very common technique in displaying a character’s temperament. When the way a person reacts with others around them is seen, a definite opinion is created.

We see examples of this in ‘Just Lather, That’s All’. Captain Torres is seen as a cruel monster when he refers to a firing squad as “a fine show”. Once the man opens his mouth, the reader is able to make an assessment of his personality. David is involved in a substantial amount of dialogue in ‘The Harness’. He speaks as though he is putting great effort into being mature, as is evidenced by the statement “you always say such funny things, Art!” Few young children speak in an equal, maybe even condescending, manner to their parents. We see David’s struggle to please his father through his dialogue with him.

‘The Harness’ is written in the first person, from Art’s point of view. He is biased so only his thoughts are heard in this story. ‘What had I done wrong?’ was a common sentiment he expressed. His confusion is felt, even when the reader longs to answer his question. This technique allows the reader to interact with the character and feel like a participant. The barber writes in the first person in ‘Just Lather, That’s All’ as well. Art seems to be writing as though he is sharing past events with the reader. Téllez, however, uses stream-of-consciousness to describe the character’s thoughts during the events. The barber struggles to rationalize his actions while shaving. He thinks about “how easy it would be to kill him. And he deserves it. Does he?” The author reveals his passion for his cause, but his reluctance to become the type of murderer he is trying to eradicate.

‘The Harness’ revolves around Art’s development as a character. He has to come to an understanding of his role as a parent and the role his son should be fulfilling. The author had to show Art’s previous misconceptions, along with his final opinions. This required exposing his weakness along with his good intentions in order to make a likable character. The barber in ‘Just Lather, That’s All’ is devoted to both his cause as a rebel and his craft as a barber. He is a round, developing character. The story begins with his indecision to kill Torres, but it ends with his resolution to let him leave. Torres, on the other hand, is a static character. It is not necessary for Torres to develop, although he does display a greater depth when he reveals his prior knowledge of the danger he was in. An author has to decide which characters need development and which ones can remain flat. Most plots require both types of characters to function effectively.

Both ‘The Harness’ and ‘Just Lather, That’s All’ portray characters with depth and complexity. Some devices are common to each author and are fundamental to identifying the personalities of the individuals. Other techniques can be chosen to fit with an author’s style and plot. Character development can enhance a story if it is well done, or it can damage a story if it is not sufficiently completed. These two authors understood what needed to be represented in a character. They showed them in different manners, but the result was the same: a complex, intriguing personality.

Personality of Character in The Harness. (2016, Jun 04). Retrieved from https://studymoose.com/personality-of-character-in-the-harness-essay 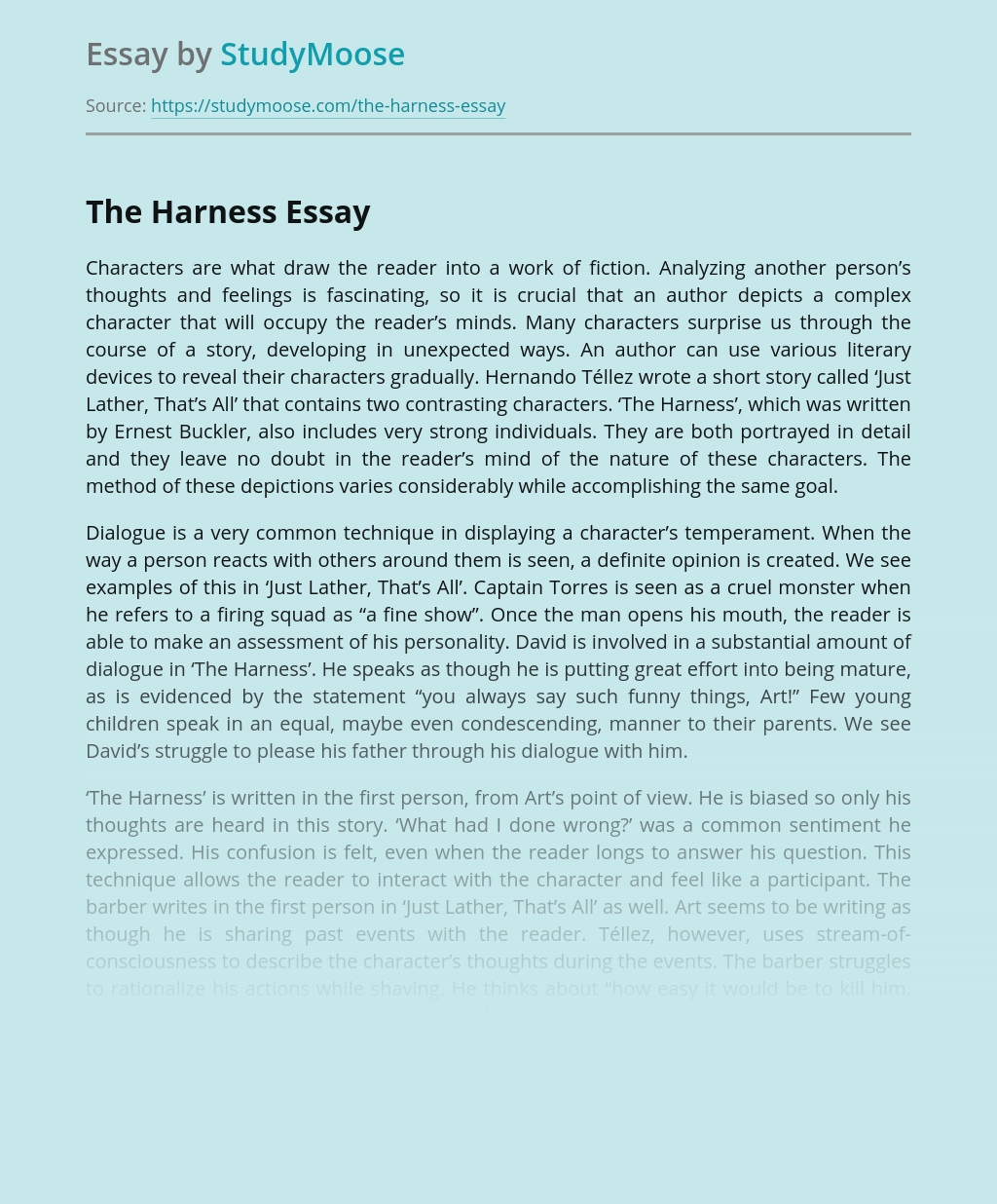 Rate this post The Brush by the Salinas River is one of the most important locations in the entire novel. Steinbeck creates a beautiful and natural setting by his use of figurative language. “Willows fresh and green with every spring” and “leaves lie deep and so crisp” create an image in the mind of the...

General Forms and Types of Literature

Rate this post A theme is the main message a reader can learn about life or human nature from a literary piece. From a story you have read in class, identify a theme that the reader may learn from the story. In a well-organized essay, describe this theme. Use textual examples from the story to...

Rate this post The short story, “Dead Stars” was written during the American Colonization of the Philippines, a time when the modern short story, critical essay, and free verse poetry were introduced. English was the medium of learning, and became, as well, the language of the learned. This was also the time when utilitarian literature...

Rate this post There are points in a person’s life when they must grow, drop their naïve illusions about the world and step into the shoes of an adult and accept the harsh reality of life. Jasper Jones is a ‘coming of age’ novel written by Craig Silvey set in small town Corrogan. With the...