Personality in a Play An Inspector Calls

‘An Inspector Calls’, by J B Priestley, is a play in which he shows how the personalities of two characters can contrast against each other. In this essay I intend to show how the characters Mr Birling and his daughter Sheila contrast to show two views, which contrast on the death of a young woman, caused by the actions of the Birling family.

‘An Inspector Calls’ is set in 1912, in the dining room of the Birling family. The play opens with the Birling’s and Gerald Croft celebrating Sheila and Gerald’s engagement.

Don't use plagiarized sources. Get your custom essay on
“ Personality in a Play An Inspector Calls ”
Get custom paper
NEW! smart matching with writer

From this we are able to learn that they are quite well off as they are able to afford to throw a party, unlike most at this time. Once we are a few pages into the play an Inspector calls and commences to explain that a young woman has died, by committing suicide by drinking a bottle of bleach. As the play progresses the Inspector questions the actions of all the Birlings.

At the beginning of Act One, we are given a few brief details about Mr Birling by the author. We are told that he is a ‘heavy-looking, rather portentous man in his middle fifties with fairly easy manners but rather provincial in his speech…’ This suggests that he is a man of high standards and significance and is quite well mannered, but he is actually a man of low sophistication and a man who is not well educated. Priestley shows all of this by making Birling a ‘single-minded’ man who won’t adopt any new ideas like the ‘higher-class’ mixing with the ‘lower-class’ people.

Birling is not a very likable man as he is very vulgar and unsociable towards others. His first thought is to make money to overwhelm his family in whatever way he can, and this usually means being harsh. He is mainly out for financial gain or else to improve his reputation. Birling is very ignorant about the real world and real matters; he is a selfish person. Priestley has deliberately made Birling unreliable by using ironic references to the impossibilities and the progress of mankind; Priestley has used the war (still to come) and the Titanic as examples of mankind (the actual failures).

Birling believes that the route to success is through the world of business and social reputation. He has a very high opinion of himself and has strong beliefs: ‘A man has to make his own ways’ Birling will only consider a man to be true if he has made his own way up the ‘ladder’ from the bottom with little or no help. Although he may be ‘single-minded’ and doesn’t pay much attention to his family, he is still a successful businessman and has made his own honest approach to life. But with this in mind he still lacks refinement and good taste and he will not have anything done to connect the death of Eve to the family as this may dirty the name of the family.

In contrast to Birling, Priestley has created the character of Sheila. She is still very like Birling in the way of reputation and greed for money, but she is able to adopt new ideas and cultures, she also seems more in touch with the apparent world. She is living life to the full at the moment before she gets tied down in her marriage to Gerald, which she doesn’t seem to be very interested in.

She is a very happy with her position in life at the moment, although she may have been pressurised into the engagement, for her fathers gain, she is still however looking forward to her wedding. Sheila has a bubbly personality that is only going to get destroyed by her family’s greed and actions. Once Sheila learns of Eve’s death she is devastated that a young woman of her age has died, but once she sees the photograph the guilt hits her, as she knows that her actions may have contributed to her death. From this point we learn that Sheila is actually a very jealous person and could be a ‘spoilt brat’ as she will use her high standing position to get what she wants: ‘I went to the manager of Milliards and I told him that if they didn’t get rid of that girl, I’d never go near the place again…’ Here she has used her upstanding and her father’s reputation to get what she wants. She knows this will work as they are considered to be of importance to locals and who will try to satisfy their needs.

She disagrees with her father as they both look at this different and see it different. Sheila soon learns from this mistake and matures as she says that: ‘It’s the only time I’ve ever done anything like that, and I’ll never, do it again to anybody’ She may say that she is going to learn from her mistakes but she is not very trust worthy and it is difficult for someone to change from what they have always grown up with but she seems genuine and she may well change from this experience. By the end of the investigation Sheila realises that she has the responsibilities for others in the community as well as her self and her family. Priestley has made Sheila’s character represent the In conclusion I think that ‘An Inspector Calls’ is a great play, which shows how two characters can contrast with each other on a the death of Eve Smith.

By the end of the play we learn that Mr Birling hasn’t changed his views at all as he still is out for financial gain and to make a better reputation for the family, but Sheila does change from realising that there is more to life than looking after yourself and family and that having a high reputation is not all that you have to look out for; you have to look after the community also. They play ends with a spectacular ending as Gerald phones the Infirmary, only to find out there was no death and the Inspector wasn’t real. They then realise that it was all a hoax, but once they realise this they receive a phone call from the Infirmary to say that a young woman has committed suicide by drinking a bottle of bleach.

Personality in a Play An Inspector Calls. (2016, Jul 22). Retrieved from https://studymoose.com/personality-in-a-play-an-inspector-calls-essay 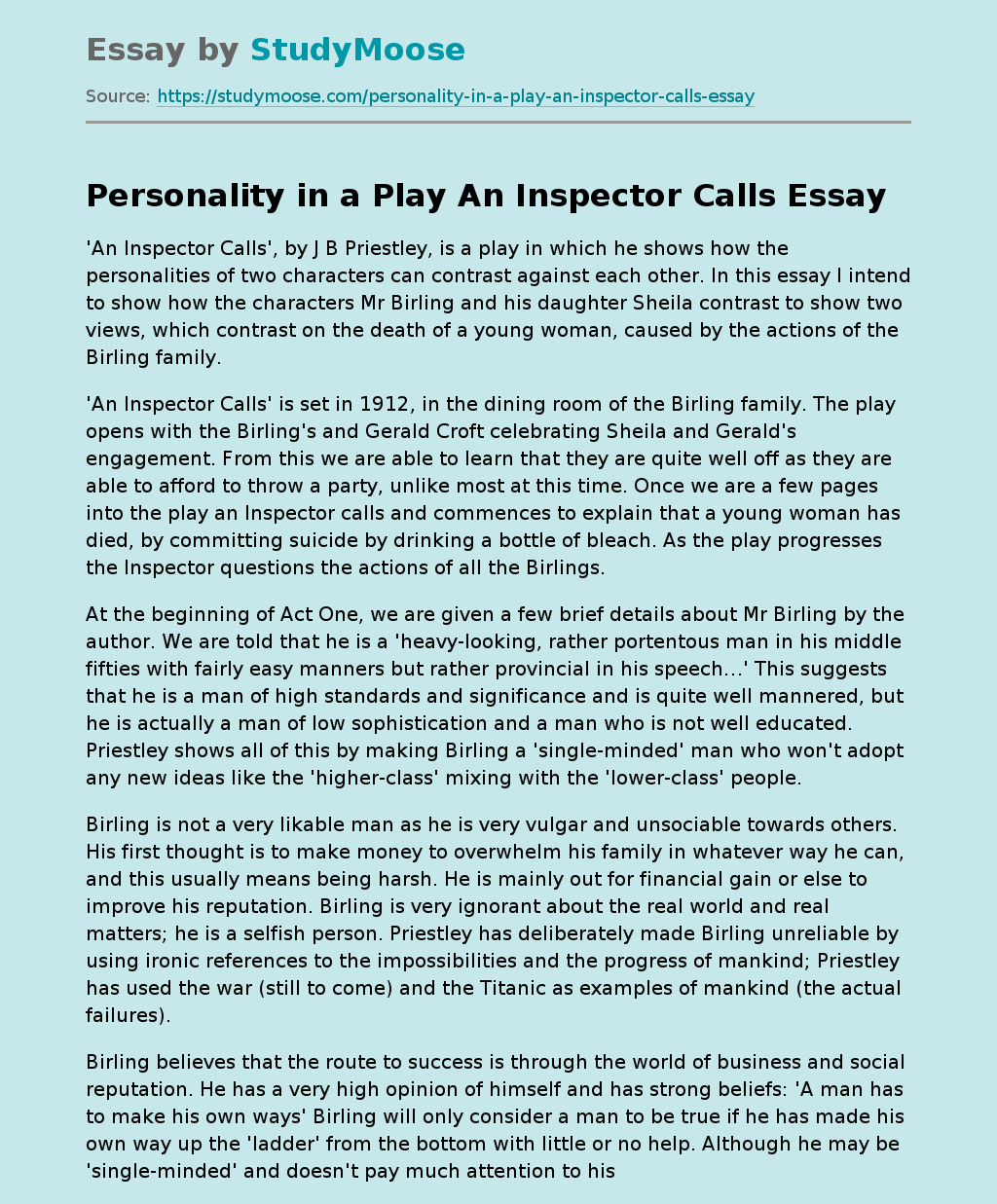