An individual’s personality is defined by their behaviors, thoughts and feelings. Actually, it is the set of mental characteristics that make someone unique from other people. Human personality is shaped in different stages of life as a result of exposure to different situations. There are some theories about personality.

Don't use plagiarized sources. Get your custom essay on
“ Personality and Appearance ”
Get custom paper
NEW! smart matching with writer

On the other hand, there are some people who have a weak personality.

These people have several negative personality traits. For instance, they may be impatient, irritable, timid and, as a result, unsuccessful in their life. The reason why they are unsuccessful is that they easily give up hope in the face of difficulties. Such a weakness can also affect their behavior towards other people. Therefore, they need to improve their personality by changing it.

How flexible and changeable is human personality? Is it simple to change it? Although it seems overwhelming, it is possible to change the personality.

But we should bear in mind the fact that we cannot change it completely. Even people who are well-equipped with the right tools and information can change only a few traits. Psychologists believe that “how to change the personality” is more important than “what to changer”. They believe that individuals need to think deeply about their personality before they get started because they get to know themselves better this way.

As you know, we need to make friends with people in deferent places such as gym, school or university. We may take some criteria into consideration before building up a relationship. Two important criteria are the new friend’s personality and appearance. Actually, at the beginning of a friendship what comes first is appearance but with the passage of time personality gains more importance. The reason why appearance is more important than personality at the beginning at a friendship is that we don’t know what’s going on in that person’s mind and the only thing that lets us get to know our new friend is the passage of time. Therefore, no matter if you don’t know enough about your new friend’s personality. Keep on your relationship with hits / her and if he / she sounds like an illogical and intolerable person, put an end to the relationship.

Is it possible to realize what kind of personality someone has just based on his / her appearance? Do you form an opinion by what you see in someone’s appearance? Some people are easily influenced by the way others dress and talk. Actually, these people form an illogical opinion about others by the first impression they make. But it is unfair to judge people’s personality based on their appearance that’s why people always say, “Don’t judge a book by its cover.” Today, we care a lot about those who dress well that’s why everybody likes to care a lot about his / her appearance.

Actually, it is good to care about our appearance as long as we don’t waste our time and money. How about those who spend an enormous amount of money on cosmetics and plastic surgery? They are obsessed people who want to improve their facial and physical appearance. They may deny the fact that cosmetics and surgery may pose a danger to their health. Actually, they may help you look younger in the short run, but they make you look older in the long run. So it might be a good idea to avoid using too much cosmetics. Also, you don’t need to worry about the signs of aging because old age is unavoidable. 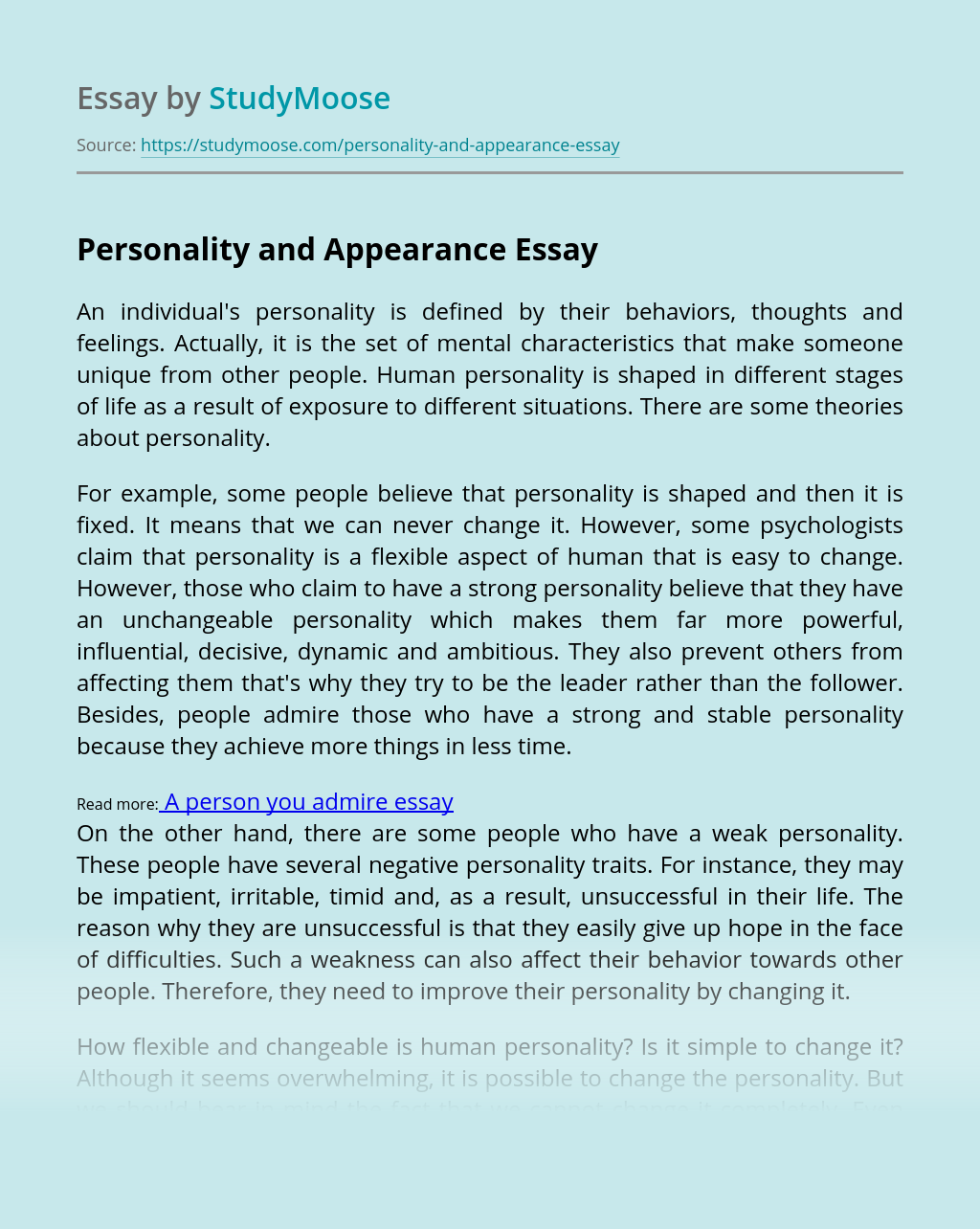