This Sunday morning I had the opportunity to witness my first Buddhist temple service at the Toledo Zen Center. My classmate, Tasi, accompanied me and we arrived to the service around 10:30 in the morning. When we first entered the temple we were both greeted by the man whom I had spoken with about coming, but were instantly amazed at the amount of color there was within the temple and how beautiful it was. I immediately noticed how unique and unusual it was in appearance compared to any religious service that I had ever attended.

Don't use plagiarized sources. Get your custom essay on
“ Personal Reflection Essay for Trip to Buddhist Temple ”
Get custom paper
NEW! smart matching with writer

From the beginning, I was intrigued and was looking forward to observing the Buddhist rituals and routines.

After we were greeted we took our seats towards the back of the temple, as that was where we felt most comfortable. I noticed that there were many large pictures of Buddha and his two disciples that surrounded the people. The people participating in the service laid out a mat on the floor and began to kneel around the food they had placed on the mat as well.

I feel as though attending this service did confirm my perception of what a Buddhist service would be like. The way in which I had envisioned their services was very similar to the way in which it turned out to be. It was a very calming and relaxing environment and there were very little interaction within the people, other than the chanting of the scriptures. The only aspect of the service that was I was surprised by was the fact that was very little music or anything that could even resemble music within the service. I generally think of a service having some type of instruments playing, but there were no instruments or any form of music other than the people themselves.

I personally found the religious activities that they performed to be very calming, soothing and perhaps rejuvenating. I enjoyed the chanting of the scriptures, as I feel that it made you feel and believe what you were learning and hearing even more so. In addition, I was very fond of the many pictures of the Buddha. The strange aspect to me was the lack of interaction between the people. That is an aspect of the religion that I was unable to relate to, but perhaps that is what makes the service so calming. I am unsure if this aspect is something that I would be able to handle very well, but overall I cannot say that there were really any parts of the service that offended me. I came into the experience rather open-minded and interested in really learning what their service was like in relation to the services I attend on a regular basis.

All in all, I can definitely say that this was a positive experience for me. I thoroughly enjoyed the opportunity to take part in this service and felt very welcomed throughout the entire service. I was impressed by the reaction the people had to the meditation and felt as though I learned a lot from the trip as a whole. Although this may not be my religion of choice, I felt as though I benefited a great deal from expanding my knowledge on the Buddhist temple services and would definitely not be opposed to returning.

Personal Reflection Essay for Trip to Buddhist Temple. (2016, May 16). Retrieved from http://studymoose.com/personal-reflection-essay-for-trip-to-buddhist-temple-essay 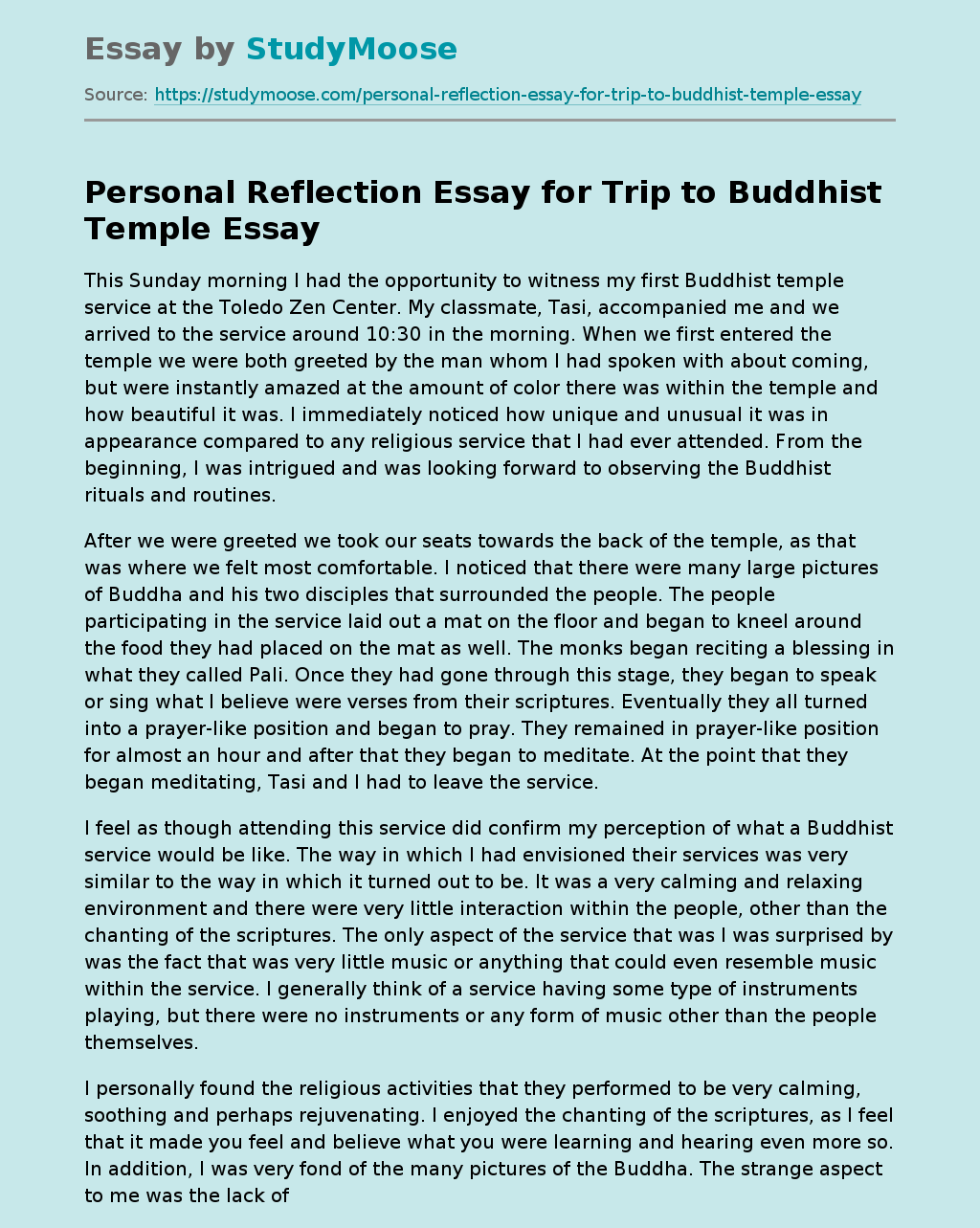