Fear
My heart was pounding, my body was shaking all I could see is white dots, and the thing that was on my mind was where am I, and how did this happen. After a month of my accident I could remember parts of how that day started and ended. But as time went by I remember how that day started and it was a Tuesday afternoon. It was the middle of the wrestling season and that day we had a match against the Mendota Aztec to see who would stay number one in our league.

Don't use plagiarized sources. Get your custom essay on
“ Personal Experience: My Fears ”
Get custom paper
NEW! smart matching with writer

So everyone was excited, but also serious. When I entered and look around I had seen a lot of determination and confidence.

As the day went on and we were on our way to Mendota, the seriousness went away, because we were a bunch of seventh graders in a hot bus. So we went crazy like we were monkeys stuck in a small cage. We also started to throw paper balls at each other and got a little bit loud.

At that moment I wasn’t really thinking about the match or who I was going to wrestle, all I was thinking about is today going to be a good day. But one thing I am always going to remember are once we entered Mendota everyone got quite, because it was time to get serious. Once we got there we had to go to the locker room and weigh in to see who we were going to wrestle.

So the match started, I had to wait for my turn to go, but as the match went on I could tell some of my teammates were tired. We were winning 3-2, which means we had three wins and they had two. As I was waiting to get called for I was thinking how I was going to win my match, but I had a strange feeling that something bad was going to happen. But finally it was my turn to go wrestle. I got up and shook my opponent hand and the referee started the match. As we started to wrestle the crowd got louder and louder, I felt like I was in a football game that’s how loud it got. We were going at it, I took him down but he took me down at times we were tiring each other out. As the match was getting to a close, I was thinking about how I am going to finish this match already, but before I could do anything my opponent shot at my legs and try to pick me up. Next thing I know he moved up towards my upper body, because he couldn’t take me down. So he puts his shoulder right in the center of my chest and pushes me up from the ground.

As I felt my body hit the ground all I could really feel was nothing. My whole body went into a compensate shock. Which are when your whole body goes numb and your brain reroutes all of the blood to your heart, lungs, and kidneys, because these are most vital organs. As I was lying down all I can remember at that moment was staring up at the ceiling and seeing white little dots floating around. Next thing I know it I see my left hand raise up and go across my neck to call for help. Then I realize that I was in pain and needed to get help. So I raise both of my arms to single the referee that I need help and to stop the match. After I did that my coach ran towards me push the kid that landed on top of me to see what was going on. I remember him telling me that when he seen me I had my eyes wide open trying to catch my breath and shaking a lot. My coach called for the medical staff to come and call 911. Meanwhile I was on the ground I was trying to catch my breath.

My coach tries to calm me down so I can breathe and relax. But I just couldn’t I felt like a fish out of water. That’s how bad it got. While all of this crazy stuff was happing in my head I was thinking about my greasiest fear, which is dying and that just made things worse. I was scared, at that moment I knew what fear really felt like, and it was just something that I never want to feel ever again. But before anything else bad could happen the ambulance finally came and once I seen them I finally started to relax a bit and started to breath normally. But after that they took me I passed out while they were taking me to the hospital.

I woke up to the doctor talking to my parents and he was saying that I suffered a concussion, had bruise ribs, and had a minor seizure. So they made me stay the night and went home the next morning. The doctor had told me I was going to be out for at least three weeks. On the way back home I was silent, because all I had on my mind was what really happen the day before. I never been through something like that before and I was freak out. After that moment I was scared to wrestle ever again, because I just didn’t want to go through that pain again. A couple days have passed, I kind of got better and wasn’t as shock as I was before or thinking about the pain as much. As the weeks went by I started to go back to my old routine and would exercise everyday by running around the middle school track after school. By the start of last week of being out of sports I was starting to feel like my old self but yet I was still hurting from the mental pains I had. By the end of the week my coach came to visit me to see how I was. We were just talking and before he had to go he told me that if I still wanted to wrestle in the Tournament of Champions.

I didn’t notice that I qualify for it but I guess before my accident I had enough wins to be qualified to go. I knew if I would go I would be facing people that are at the top of their game. I wanted to go, but I was still scared to go back and get hurt again. On the other hand I was thinking about this can be my opportunity to get back on my feet and face my fear and get over this hump. So I told my coach that I wanted to go and I am going to go back to practice and push myself to be better than I was before. So little by little I went to practice and took it slow the first couple of days until I could get my body use to the routine. After the second week of my return I started to look like my old self and there was days when I wanted to quit and give up, but I told myself that I need to get better and better so this would never happen again. So I push and push myself until I knew I was ready for the t.o.c. So the day of the tournament came and I was ready for my first match, but yet I still had second thoughts of what I was doing. I didn’t let those thoughts get to me, because I wanted to get over the feeling of fear.

Since that day I knew what fear really meant to me and I needed to get passed it so I can be a better person and not let that hold me back from what I love doing. My coach told me it took lots of guts to do what I was doing and he was proud to see me doing better. So I started my first match I was really nervous and scared but once I heard that bell ring my mind cleared and I felt like nothing ever happen to me and nothing like that is going to happen to me again. I didn’t have that certain feeling that feeling of being scared or afraid or anything. So I went on I wrestle I won my first match but sadly I lost the tournament. But the experience that I had was unforgettable. After what happen I thought to myself that if I can get over this I can get over anything when I put my mind on it. But to this day I still remember that pain and that one experience that change my life, but I don’t let it affect me or put me down I just use it as fuel to my tank to success and keep pushing forward. 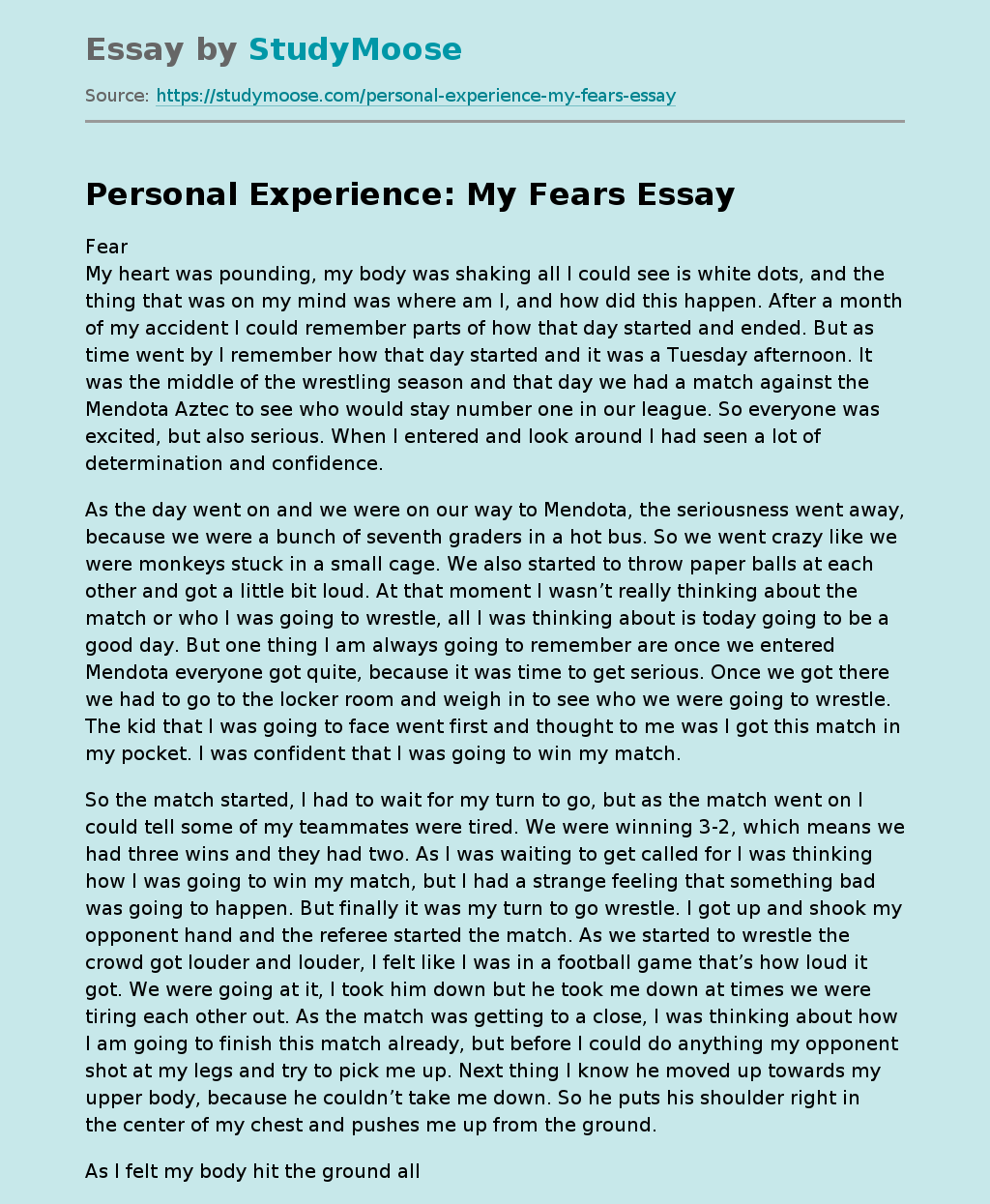