Persepolis: The Story of a Childhood

Persepolis is a book about a young girl in Iran by Marjane Satrapi. Persepolis is a good book, filled with hardship and moments of childhood in a world where all children are forced to grow up. It is told in a comic strip.

The story begins with a young Marjane who doesn’t understand what’s going on around her. Her parents talk about culture. Her teacher talk about her faith. She wants to become a prophet. She takes refuge in God and reading all the books she can.

Don't use plagiarized sources. Get your custom essay on
“ Persepolis: The Story of a Childhood ”
Get custom paper
NEW! smart matching with writer

Her world changes quickly when their is a new Islamic religion that takes control. She is forced to wear a veil, and the picture of the Shah is ripe out of her book. Her parents’ friends are released from prison. She meets her uncle whom she loves. He tells her stories about being in prison, and give her gifts.

Marji and her parents realize that the Iran ways isn’t that much better than the government that was there before.

People who joined the revolution are now enemy of the government. This make times for her hard and, at times, scary. We read four chapters The Veil, The Bicycle, The Water Cell, & Persepolis.

The Veil show Marji at age ten. She’s in school, wearing a veil, just like all the other girls. They don’t want to wear it. The new way in Iran made it mandatory for women to wear the veil. They also made it so that boys and girls can only go to school with the same type.

The Bicycle begin with hardship. We learn that the new way of Iran burned down a movie theater with a bunch of people in it. Marji wants to participate in the protest that’s being organized against the police. But her parents won’t let her come. That night, she tries to talk to God, but he doesn’t respond.

The Water Cell talks about Marji’s parents going to protest demonstrations against the king. Shei has trouble understating this because her school says that God chose the king. Her dad explains to her how it the king actually came to power. The ruler that was put in jail was Marji’s grandfather, who was a prince. Her grandpa briefly served as prime minister, but he didn’t like the new way of Iran when he was sent to prison. He told her prison was painful. One night, he was in a water-filled cell for hours. Marji stays in the bath a long time to try and understand what her grandfather went through.

Persepolis begins with grandma coming to visit. She tells her that when her husband was arrested, they lost all their wealth. She made sure her family looked nice despite being poor. The family waited a long time for her father to come home from a protest. She fears he was dead. He made it home alive. He tells the story of what happened at the demonstration. She educate herself to better understand, and she starts reading lots of books.

In conclusion one of my favorite parts about this book was the comic. The images, which show a great picture. The light and dark were used to show a message. There was also a great deal of hardship. I don’t think I could live in this time. Being force to live be one religion. Being told if I didn’t do what was told I would be put in jail.

Persepolis: The Story of a Childhood. (2021, Mar 25). Retrieved from https://studymoose.com/persepolis-the-story-of-a-childhood-essay 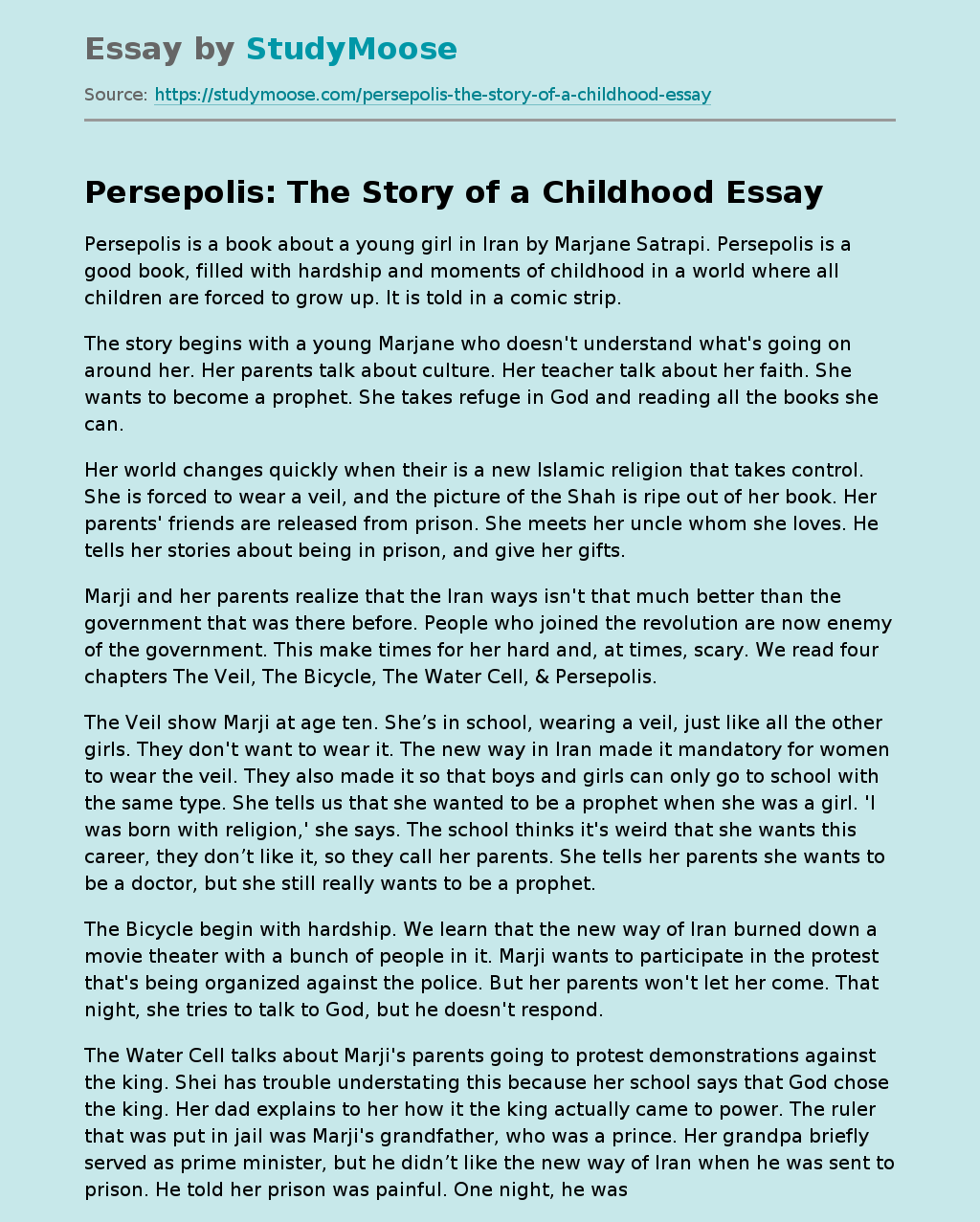