The name of this reaction is called the Perkin’s reaction. The reaction was first used by William Perkin to create phenylcinnamic acids (Johnson). It is very similar to the aldol condensation which is followed by elimination. In this reaction E and Z isomers of phenylcinnamic acid are created using benzaldehyde and acetic anhydride. The intermediate product is acetic phenyl acetic anhydride. Benzaldehyde is an aromatic compound that

The reaction involves the use of benzaldehyde with acetic anhydride which gave the phenylacetic acid which would be used with in the farther steps of the reaction to produce the E and Z phenylcinnamic acid.

Get a verified writer to help you with Perkin Reaction

The value at 1687 presents the carbonyl group. The aromatic ring has two peaks at around 1600 and 1552. The H NMR peaks for the E-phenylcinnamic acid is at 7.05, 7.20, 7.37 and 7.76. The peak at 7.05 is a triplet, this represents the presents the proton c that is attached to the benzene that is being split by protons B, which have equal energy and resonance.

The synthesis of E and Z phenylcinnamic acid had been created somewhat successfully. The theoretical yield was supposed to be a total of 2.22 g for both the E and Z isomers together. The experimental was determined to be 1.30g and 0.03g. The total was 1.5 grams, which let the yield to be 60.4%. Even though there was a decent yield most of the product was impurities. There were a few concerns that would make a compound not as pure as it should be. The first indicator that the showed the compound was not pure was the melting point. The theoretical melting point for the E isomer was 172-174oC and the melting point of the Z isomer was 162-164. The experimental melting points were found to be 164-168 for the E isomer and 155-160 for the Z isomer. Another reason why the melting points may be lower is because the products may not have been dried for allotted time therefore the melting point was affected by the moisture still in the products.

The IR spectra did not show much in interferences, perhaps it was a small contributor to lowering the melting point and the overall yield. However there was an issue with the peak for the OH of the carboxylic acid and the –CH peak of the double bond not being as broad and strong compared to the literature. This could possibly because the entire product was not completely converted to the phenylcinnamic acid. The reactants or intermediates may have been still present in the product because after recrystallization of E product white clumps of were found and the theoretical product of E was to look like sharp crystals. The NMR values showed that the peaks were around 7.0-7.8. These are confirmed by comparing them to the theoretical NMR spectra. However for both E and Z there were peaks at the around the 3.0 range which was not present in the theoretical NMR spectra. The peaks at around 2.0 are solvents used to run the NMR.

This could confirm that the impurities were in fact present in synthesis, which confirms why the melting point is not closer to the theoretical value and why certain peaks on the IR spectra are not as what they should be. The impurities could be possibly being water because that is a common impurity that occurs around the 3.0 range. This could have been prevented by drying the products for longer times than suggested and then taking an accurate reading on the melting point and yields. Other techniques could have been employed to insure that the product is not carrying any water. The use of flash chromatography could help separate the products. Another technique that could bused to remove the impurities is the rotary evaporator which can remove the solvents and impurities leaving behind the product.

In this experiment two compounds were successfully synthesized. The products were E and Z phenylcinnamic acids and synthesized using the Perkin reaction. However due to impurities the yield and purity of these two products was high enough. The Yield of this reaction was 60.4% and the melting point for the E product was 164-168 and Z product was 155-160. To confirm the successful synthesis of the product IR, NMR and GCMS were used. These spectra confirmed the existence of the products however they also showed the impurities that were present which caused them to look slightly different than the theoretical spectra.

Get a verified writer to help you with Perkin Reaction 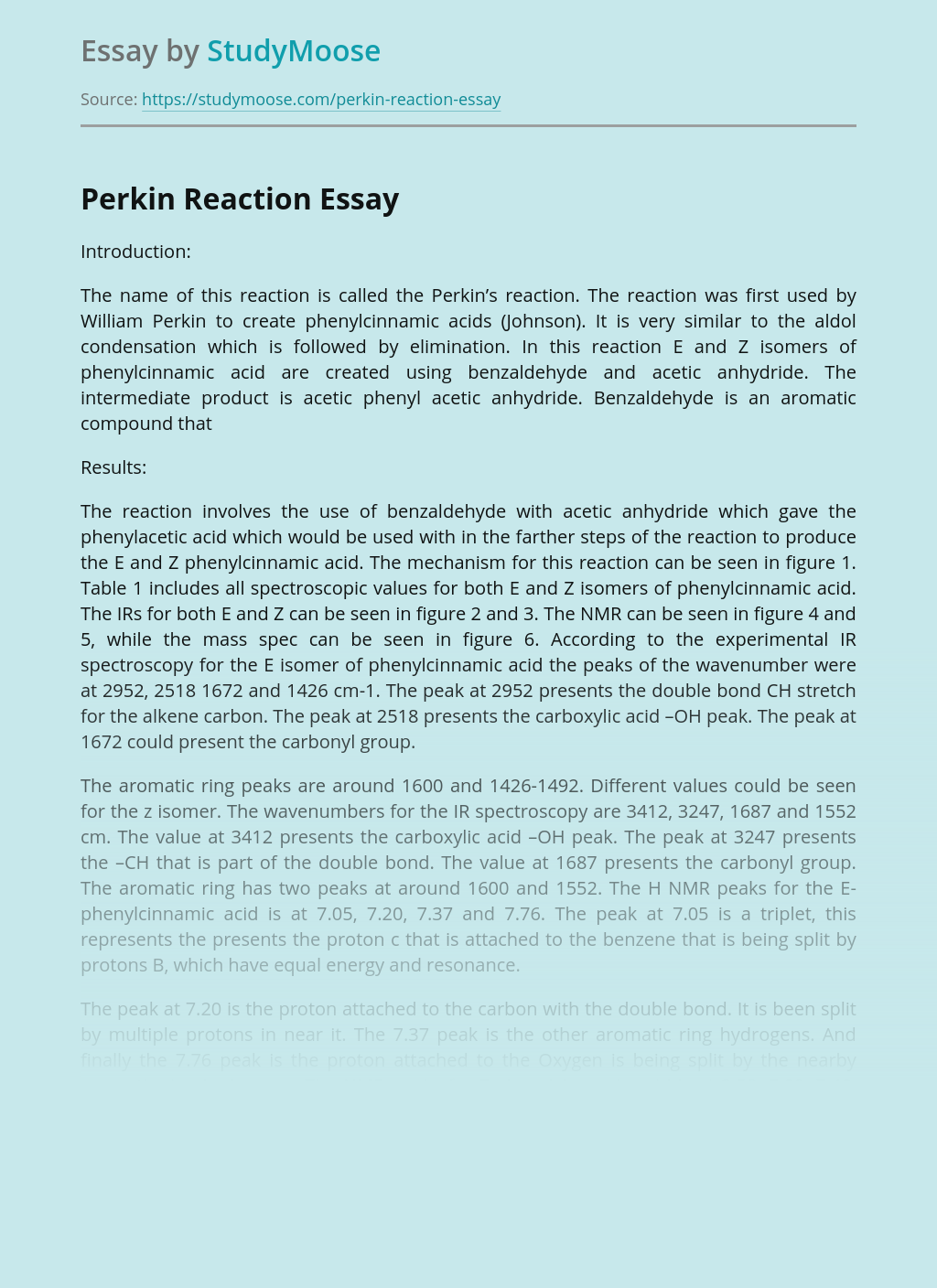 The basic principles of Osmosis and Diffusion were tested and examined in this lab. We examined the percent increase of mass and molarity of different concentrations of sucrose in the dialysis bag emerged in distilled water and the potato cores emerged in concentrations of sucrose. The data reinforces the principles of Osmosis and Diffusion, and...

Get Essay
The Quantitative And Qualitative Analytical Techniques

Titration Of Acids And Bases

The Loftus and Palmer study is a laboratory experiment. This means that the study is artificial. The artificiality of the setting can intimidate participants or make them more obedient. This in turn can produce unnatural behavior and results that do not generalize to real life. This can be seen in experiment 2 when 12% of...

Preparation of Alum from Aluminum Metal

Experiments with Metals and Ions of Metals

Metals react with non-metals but each to a different extent. The most reactive metals are alkali metals (group1A, where group is a vertical column in the periodic table), which include lithium, sodium, potassium, rubidium, cesium and francium. All these metals have one electron in the valence electrons’ shell; this electron can be removed relatively easily,...