Was absolutism a period of prosperity or tyranny in Europe during the 16th and 17th centuries? Anyone could answer based on opinion. Many successful events happened that had helped all the kings become better rulers with strong armies and a strong nation. There were many deaths that made people call this period of time a time of tyranny instead of prosperity. Many kings were considered obsessed with themselves or ego centered, but they improved their nations by adding roads. Although, in my opinion this period of time was a time of tyranny simply because of how the kings ruled the deaths caused by them and the way the government ran.

Don't use plagiarized sources.
Get Your Custom Essay on Period Of Absolutism Just from $13,9/Page

During the 16­17th century all the kings that had ruled, ruled in their own type of style. Although if one were to look back to Machiavelli’s book, The Prince, they would notice how most of the rulers had ruled by following the guidelines from his book. Though, some of these rules and guidelines made the kings seem selfish.

Machiavelli had said in his book how a ruler should be feared but not hated because if the kings seemed to friendly, then he wouldn’t be taken seriously. “Kings James I of england for example felt that kings should be treated like gods”(Doc 2). He felt that the government should’ve been ruled with more divine power. He felt like the only way he could be respected was to be treated like a God. 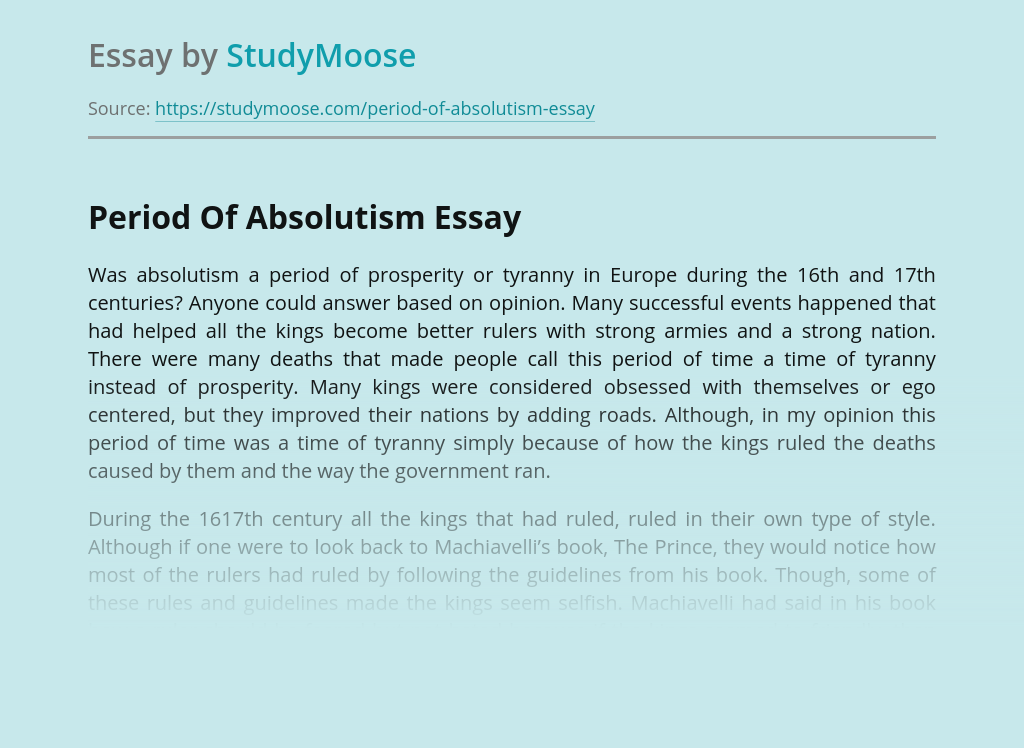 Anti-slavery individuals who believed that the government should grant western lands to settlers free of charge founded the Republican Party in the 1850’s. The first official meeting was held on July 6, 1854 in Jackson, Michigan. The republicans became a national party in 1856. Abraham Lincoln was the first republican president. A few credits to...

The core meaning of civic education is that it is a subject that promotes civic knowledge, civic skills, civic values and civic dispositions. Civic knowledge is concerned with the content or what citizens out to know, it is thorough familiarization with what civic life constitutes. It is having an understanding about basic principles of democracy,...

Industrial democracy has its origins in the theories of Kurt Lewin who strongly advocated the idea that the management of change requires full participation from those affected by change (Sambureni 2001). Sambureni further defines industrial democracy as ‘a process in which employees either directly or indirectly through their representatives, share equal power over the decision-making...

Leadership characteristics can be generalized as either autocratic or democratic. The autocratic leader tends to lead by authority and uses coercive power. Oppositely, the democratic leader will delegate authority and use expert and referent power to influence employees. One difference between a mechanistic structure and an organic structure in an organization is the chain of...