Percy Bysshe Shelley — a free spirited person, surely a poet of unconventional ideas and beliefs that led him to earn name as rebellious poet. He did not hundred percent subscribed to norms of romantic poetry. He was a unique mind with different thought patterns that did not match many. He was influenced by Goethe and surely had effect of myths of freedom, how to live free spirited, fearless life. Although, he was a member of romantic poets and shared many similarities with them, yet he has something of his own which made him stood out even among the romantics.

In their treatment of nature, words worth and Keats write about nature in itself. Wordsworth worships nature and calls nature his nurse, as if nature has healing power. Keats sentiment for nature is simpler, he is somehow influenced by the pantheism of words worth. He is sensual poet and loves nature for her sensual appeal. Her appeal to sense of sight, hearing, smell and touch.

We can find all 5 senses employed in one poem of Keats; no other poet is seeing doing so. The most they use is one or two senses at a time. Shelley treats nature as metaphors, metaphors for beauty, for experiences and expressions. He also worships nature. He considers nature to be inspiring power (as in ode to west wind) which can help him to convey or transmit his message to people in this world.

Keats and Shelley both wrote about autumn in year 1819, and their writing had similarities as well as differences.

В Keats celebrated autumn and stated the fruitfulness, the blooms of flowers, the sunlight and birds and swallows gathering. Shelley’s autumn is dark and very much insinuating decay. He is submitting to the might nature holds in it. One of his idea in the poem was also painting life as something having an accidental force. As a tragedy. I fall upon the thorns of life! I bleed!

P.B. Shelley’s beliefs included political radicalism, vegetarianism, and free love. Shelley had interest in politics. He had anarchist views, and also followed William Godwin, who had same ideologies. He denied the conventions which were prevalent. He was a revolutionary thinker for whom to think’ was normal to do. He wrote in several styles; revolutionary, philosophical, lyrical, out which lyrical was liked by public the most. Percy was skeptical about earlier revolutionary fantasies and as an atheist, he constructed new myths. To him, mystery was beauty.

He was friends with other romantic poets but that friendship never let his own ideas and concepts waver even for a short while. He was very definite in his stance. In words of words worth, ‘Shelley was one of the best artists of us all: I mean in workmanship of style.’ As healthy competition they have their fair share of rifts as well, and they did comment on each other’s works. Once Shelley remarked, words worth has as much imagination as pint-pot: — he could never fancy another situation than that wherein he stood. Shelley’s poem, to words worth is clearly stating what he thinks of words worth poetry. He appreciated words worth’s past works yet said that now words worth has lost his touch and that he is a lone star.

Their differences also lied mainly in the Percy Bysshe lack of faith. Shelley was skeptic regarding human nature, critical of concepts of spirituality which words worth possessed at the end of his life. Shelley had flexibility of mind but not in spiritual sense. Shelley was an atheist. In his hymn to intellectual beauty Shelley makes religious reference in line, poisonous names with which our youth is fed’ suggesting that young people are forced into religion, abiding by myths and fears. He even seemed to be uncertain of the afterlife.

There have been great ideas in Shelley’s works, ambiguous, inspiring, and enduring. The restlessness and melancholy, the up rise against authority, the strength of poetry the pursuit of perfect love and this wild life always in search of freedom- all of these represented Shelley at the way he lived his life and has left unusual stamp on idealism. 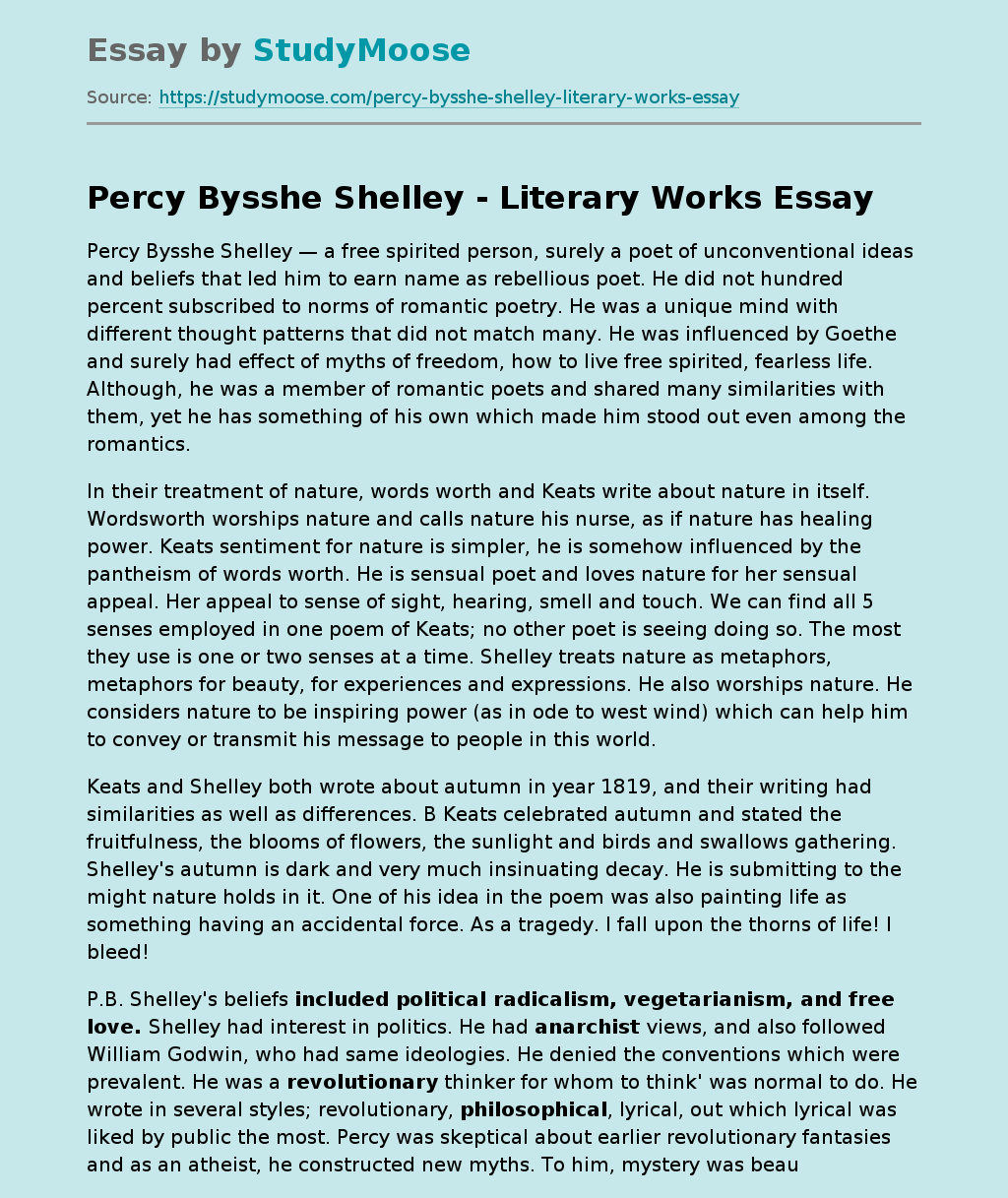