Appellant Lou Surivan Sisuphan took $22,600 in cash and $7,275.51 from (Toyota Marin [the dealership] defendant) his employer’s safe on July 3, 2007. He did this in hopes that a coworker would be held responsible for the disappearance of the money and would be terminated. Sisuphan was convicted of embezzlement on April 15, 2008. In June 2008 he appeals from the judgment of conviction, contending that the trial court made a mistake when it failed to instruct the jury that at the time he took the money, he intended to return it before criminal charges were filed.

Don't use plagiarized sources.
Get Your Custom Essay on People v. Sisuphan Just from $13,9/Page

He also states that the trial court excluded evidence on that he restored the money to the company, claiming this evidence proved he never intended to keep it and therefore lacked the requisite intent for the crime. Issue

“The question, before us, therefore, is whether evidence that Sisuphan returned the money reasonably tends to prove he lacked the requisite intent at the time of the taking.” Was his the Fifth Amendment right to present defense and “all pertinent evidence of significance value to that defense” violated? Rule of Law

The Fifth Amendment right to present defense and “all pertinent evidence of significant value to that defense” was not violated because the “return of the property is not a defense to embezzlement.

Fraudulent intent is an essential element of embezzlement. Although restoration of the property is not a defense, evidence of repayment may be relevant to the extent it shows that a defendant’s intent at the time of the taking was not fraudulent.” Analysis

Since Martin Sisuphan was authorized to manage the financing contracts and obtain payments from lenders on behalf of the defendant the lawsuit was effective. It does not matter that there was no intent of stealing the money because Section 508 (of the California Penal Code) states: “Every clerk, agent, or servant of any person who fraudulently appropriates to his own use, or secretes with a fraudulent intent to appropriate to his own use, any property of another which has come into his control or care by virtue of his employment is guilty of embezzlement.”

Holding
The issue is that Susuiphan intended to use the money for a purpose other than to which the dealership entrusted it to him, therefore the evidence that he returned the money before criminal charges were filed is irrelevant. The judgment is affirmed. Plaintiff was sentenced to 120 days in custody and 3 years of probation. 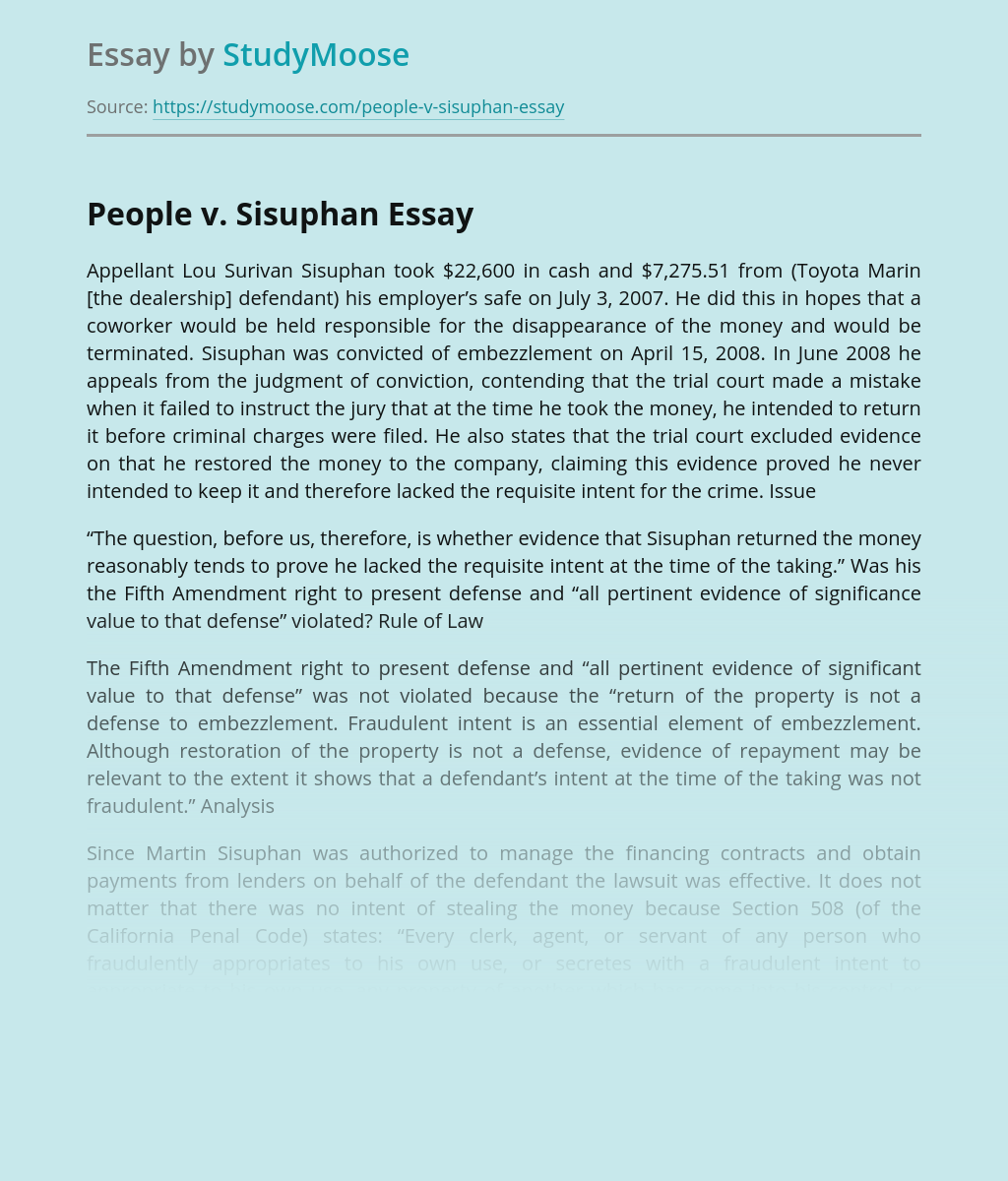 A crime is a serious offense against the public law (Webster Dictionary), but not all serious crimes have a clear victim. Victimless crimes, legal offenses to which all parties consent and no parties are injured, however, account for 86% of the Federal Prison population (Libertarian News). For the reason that the illegal activity is consensually...

Rape is considered a type of sexual assault, which is initiated by one or more people against another person without that persons consent. The act may have been forced, under threat, or with a person who is incapable to give a valid consent(1). The definition of rape has changed throughout history and is different in...

How Effective Are Various Methods in Reducing Recidivism

Prison, non-custodial sentences and rehabilitation seem all failed in reducing recidivism; however, there is little and limited evidence to support non-custodial sentences, as well as some people think if rehabilitation could be implemented effectively, it would work. Although the advantage of prison is keeping our society from dangerous people, when it comes to reducing recidivism...

Life and Crimes of Harry Lavender

Female protagonists are challenged to break the stereotype that women are weak, and to instead illustrate that women are just as capable as men in most if not all things. Marele Day’s, “The Life and Crimes of Harry Lavender” is a text in which the protagonist, Claudia Valentine subverts and challenges the male centred conventions...