People Should Be Allowed to Own Gun

Nowadays, many countries allow people to own guns. As we know that people have different physique, no matter how hard you do still cannot change of postnatal factor. Guns are useful, otherwise it won’t work effectively. Police wouldn’t want to carry them around. If everyone can have a gun, it can make up of weakness of the human body. Evildoers have guns, we will get trouble. But for good people, we can protect ourselves. Because of gun, stronger person dares not to bully the weakness.

Turn in your highest-quality paper
Get a qualified writer to help you with
“ People Should Be Allowed to Own Gun ”
Get high-quality paper
NEW! AI matching with writer

First of all, guns are not the problem, the people who misuses guns are the problem. People who hold guns have their own reasons. More about gun control on argumentative essays.

One of them is that you can protect your family and your property. If a person enters your home for the purpose of harming you, you cannot expect the police to arrive in time and stop him. This is not the fault of the police because the police will arrive only after you call.

On 31 DEC 2011, New Year’s Eve, McKinley fired a 12-gauge shotgun and killed Justin Shane Martin because she wanted to protect her 3-month-old child from being victimized by schemer. On the contrary, a lot of people have positive view on this. On the one hand, they think it is a crazy thinking to allow citizens own the guns.

It is because that overwhelming weapons will cause many unnecessary death. For instance, America is the first country that citizens own the guns. At the same time, America has the highest shooting accident every year. On 14 DEC 2012, American got a very series gun shooting crime. A gunman who opened fire at a Connecticut elementary school killed 26 people, including 20 young children. This incidence caused lots of families lost them child and it also let America got a bad impact around the world. On the other hand, many citizens think that guns are not useful for the normal life.

They think that our country gets a very good security system. We don’t need guns or other weapons to protect ourselves. Even though the hunters, lesser and lesser people want to hunt animal for the daily life. The firearm will make people living with fear. The tendency of the world is reducing people to own weapons. Most of countries around the world are prohibiting citizens own the guns, just like Singapore, China and so on. All of them get a good security system and positive educate for the youths. That’s the reason why the countries don’t have many crimes because of the weapons. However, America also makes a new move for guns control.

The president of America, Obama, decided to sweep the new guns laws. He said” this will not only ‘help prevent mass shootings’ going forward but also ‘reduce the broader epidemic of gun violence in this country’. ” it will help America to control and keep reduce the shooting accident happen. Another reason is that guns don’t make countries more dangerous. Switzerland has one of the world’s highest guns ownership rates and also one of the lowest homicide rates. In contract, South Africa, Columbia, Brazil, Mexico, Philippines, Taiwan have the world’s worst homicide rates although they prohibit citizens from owning guns.

Some people have to rely on hunting to gather food for their family so they must at least own a gun for their living. Guns are normally necessary when it is for hunting. But the most important thing is that you observe you are safety at all time. Countries without guns will not develop. We need guns for training in shooting, an Olympic sport. Most American own guns and they practice and won more gold medals than other nations and become well known all over the world. The most important things for anyone who will ever handle a gun to remember are as follow.

Firstly, you must always keep in your mind that the gun is always loaded. Secondly, you must never point the gun at something that you are not prepared to destroy. Thirdly, you must always be sure of your target and what is behind it. Only you think what is behind you will know what is the result of doing this. Finally, keep your finger off the trigger until your sights are on the target. Only if there are laws for gun safety like this and people who follow these laws should be allowed to own guns. People are going to steal and attempt murder whether there is a gun around or not; they are already breaking the law.

Therefore, the real problem is not the gun with criminals but the problems of human beings. Even though owning a gun is sometimes seen as a scary thing, there are many home security benefits of owning a gun if the proper precaution are taken. The right to protect their families and self protection. So that it depends on the person. If a person has mental health issues, then they should not be allowed to go anywhere near a gun and hold gun. However, if a person does not have mental health issues and has taken classes on how to use it, and also has taken proper precautions to keep it out of hands, then they should be allowed to own a gun.

People Should Be Allowed to Own Gun. (2016, Sep 16). Retrieved from https://studymoose.com/people-should-be-allowed-to-own-gun-essay 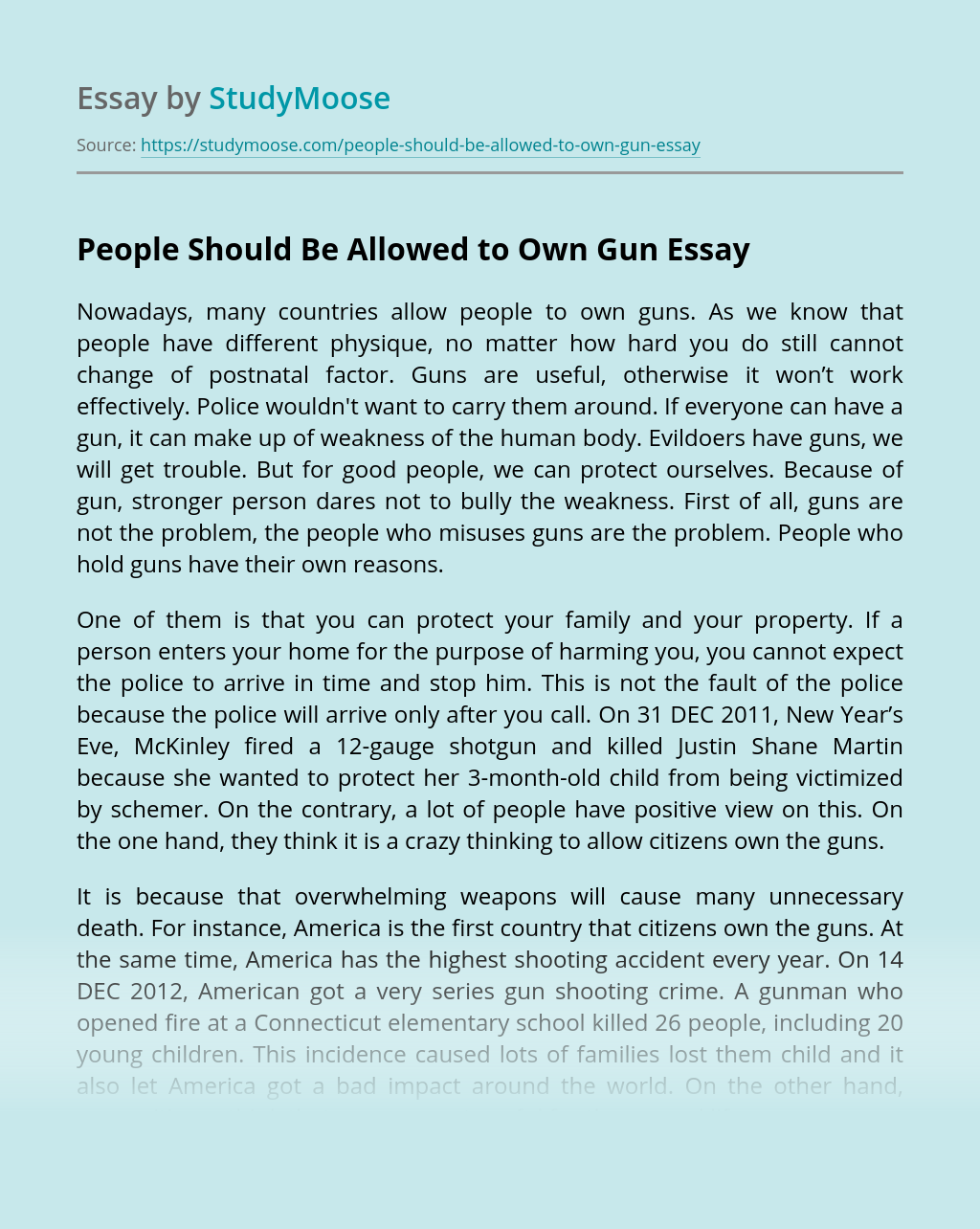 Turn in your highest-quality paper
Get a qualified writer to help you with
“ People Should Be Allowed to Own Gun ”
Get high-quality paper
Helping students since 2015
Stay Safe, Stay Original