Last week, when I was on the way to school and suddenly I heard a girl screaming for help. Then, I straight away went to look for her. I was shocked when I witnessed a girl was being robbed by a man. This gave me a whole idea of crime awareness which is alarming in the country. In this modernization and globalization era, people go against the laws to commit the immoral activities such as kidnapping, murdering and drug dealing because they are self-centered and they do not care about others’ feelings.

Don't use plagiarized sources. Get your custom essay on
“ People Commit Crime for Selfish Reason ”
Get custom paper
NEW! smart matching with writer

Thus, do you think it is right to commit crime for selfish reasons?

If they cannot make it plus they are uneducated or with low paid salary, they will tend to commit crimes such as embezzlement and bribery. This is due to the reason, people will be looked up by others based on their well off appearance, for instance, luxurious car and branded bags will upgrade their status.

Consequently, if they are having strong desire to have more money, they will tend to go against the laws and get involved in many illegal activities like robbery. Besides, they do not care about others and they just want to get more money to enjoy their luxurious life.

In brief, commiting crimes for money is a selfish action. Another point that I would like to highlight in this phenomenan of people commiting crime for selfish reason is because they want to fulfill their lust or jealousy. If people are feeling very lonely and they have strong desire to do some immoral activities such as sexual harrasment towards a girl by force. For example, when men see sexy and attractive girls walking on the pathway, they are being tempted and this will urge them to harrass those girls.

This is because they want to vent their emotion and fulfill their lust and they do not care about others’ feelings. Besides, people tend to commit crimes to fulfill their lust such as raping or killing people for excitement. If people are emotionally sick or pervert and get involved in triangle love such as when two girls are in love with the same guy, both of them might feel jealous with each other and end up with fighting. If this matter turns serious, it might also end up with a murder case.

The girl is willing to murder the other girl, so that she can own the guy all for herself. Hence, commiting crimes for fulfilling their lust or jealousy is a self-centered action. Last but not least, I would like to highlight that people commit crime for their own benefits because they want to survive in their life. Without any educational background, they could not get a proper job to sustain a living in the high cost standard in the city. As a result, this will lead them to commit crimes such as kidnapping and robbery to survive.

Besides, they need food, shelter and other physical needs of life that lead them to commit crime for their own survival. Thus, they care less about the cosequences of their action and even ignore the pain of the victims from the actions that they have done. Other than that, some people are lazy to work for their life and always think about to go for an easy way so that they will tend to commit crimes for their self-centered reasons for instance stealing, break-in houses and car thieves.

Therefore, commiting crimes for survival in their life is a selfish action. In conclusion, I restate my stand that people commit crimes for their own purposes. Their selfish action is due to craving for money, fulfilling their lust or jealousy and surviving in their life. All of these are also not a good excuse for commiting crimes and these problems have to be resolved as soon as possible which needs the co-operation between the government and citizen of Malaysia. 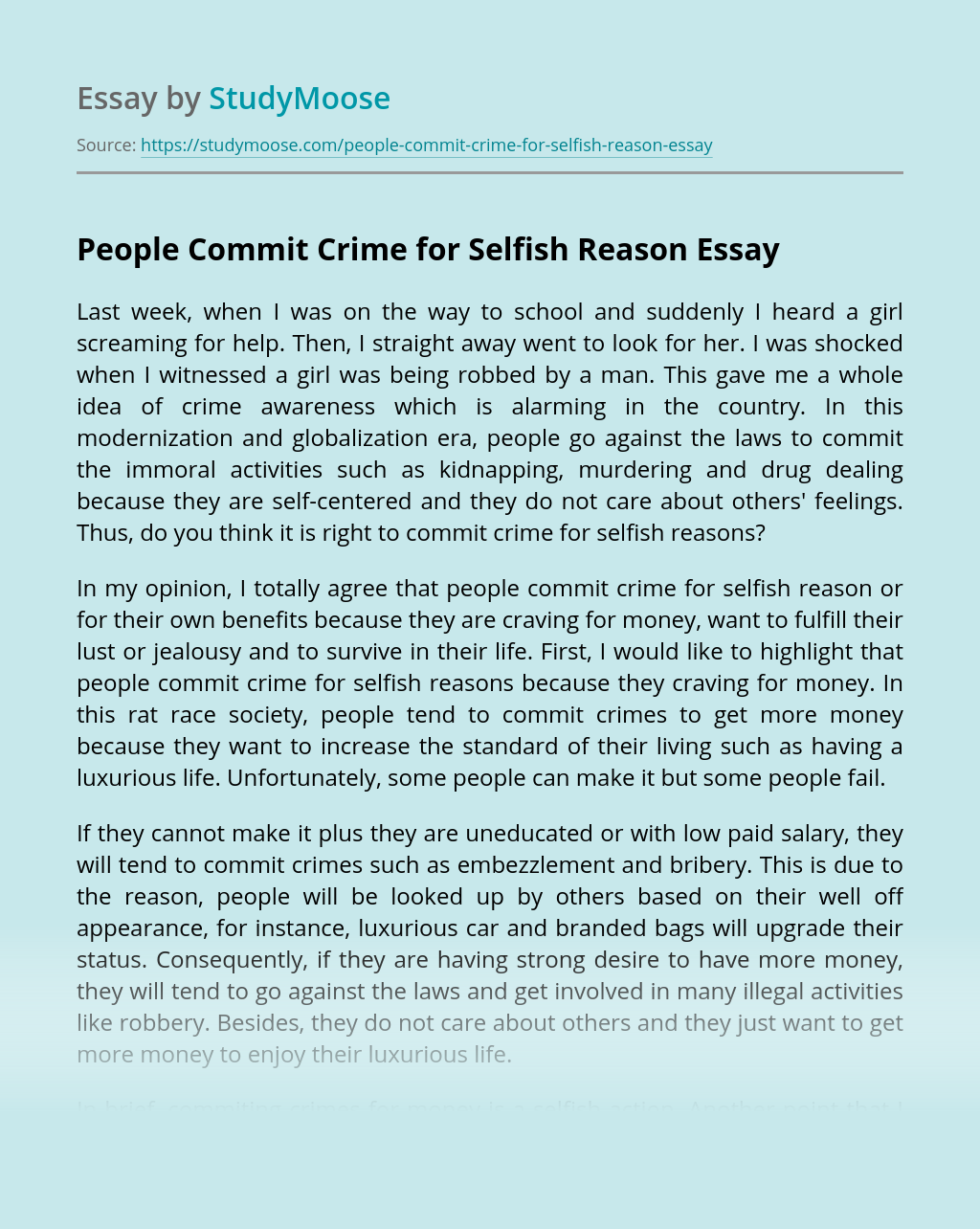