Patchwork Architecture of the Neues Museum

“The relationship between the object and the intervening spaces is not formal: it is always rooted in the context of a particular setting” Dalibor Vesely (in Brooker and Stone, 2007, p. 57).

The Neues or New Museum was completely built in 1855. The building was design by a Prussian architect, Karl Friedrich Schinkel. The purpose of the building was originally built as an extension house to accommodate Altes Museum. Most of Karl Friedrich Schinkel’s works were Neo-Classical, such as, Neue Wache also known as New Gate House and The Konzerthaus Berlin (von Buttlar, A.

Don't use plagiarized sources. Get your custom essay on
“ Patchwork Architecture of the Neues Museum ”
Get custom paper
NEW! smart matching with writer

Architectural Guide [2012], pg 4). Architecture in style of Neo-Classic contains the component of characteristic temple-like features of Greek and Rome (for instance, Acropolis in Athens and The Pantheon in Rome) Architecture, rolls of tall columns, pediments and domed roof. One of the most important elements in Greek and Roman architecture was balance and symmetry which was hugely influential in the structure of neo-classical. Many neo-classical architecture have one component that can be identified as its style, the use of columns, that are normally built to almost the same height as the building.

Columns are used to secure the symmetrical and balance of the dimension of the building as it is the efficacious and evident use of method as for exterior. Also, the uses of columns support the pediment. The arch and columns, however, have comparatively become a symbol of Greek and Roman’s architectural style. Some believes those features are a conspicuous and crucial part in the revival of its style.

Thus it remains a ‘staple of neoclassical architecture’, together with its ‘distinctive domed roof’ (N/A. (2012) NeoClassic, [Online]) . Neues Museum built in a Neo – Classical style that began in the 19th century, the building spanned over three floors including a grand staircase. The design of the Neues is heavily influenced by Stoa in Athens classical Greek architecture. Inside this building is a broad staircase and iconic columns, which lead towards a bronze portal that then leads to a double staircase to the ending upper floor which was nearly destroyed during the Second World War. In 2003, British architect David Chipperfield, whose aim was to restore the parts of the build that were destroyed while also keeping conservation requirements.

He wanted to keep to the original structure while creating continuity with the existing structure. The newly designed expedition rooms were built mainly of pre – fabricated concrete elements, which consist of Saxonian marble chips. In the Northwest wing of the new build it was constructed by recycled handmade bricks. David Chipperfield has managed to not only keep the original quality of the build but almost enhance its structure without losing any of the builds feature. (Minner , Kelly . “Neues Museum / David Chipperfield Architects in collaboration with Julian Harrap” 28 Apr 2011. ArchDaily) In conclusion, after the research through this essay, we strongly agree with the quote “The relationship between the object and the intervening spaces is not formal: it is always rooted in the context of a particular setting”. Hence the Neues Museum is situated on an island which surrounded by other neo-classical architecture, even though the building was built after the neo-classical trend had become unfashionable. Thus that makes the Neues Museum blends in with its environment.

Patchwork Architecture of the Neues Museum. (2016, Apr 15). Retrieved from https://studymoose.com/patchwork-architecture-of-the-neues-museum-essay 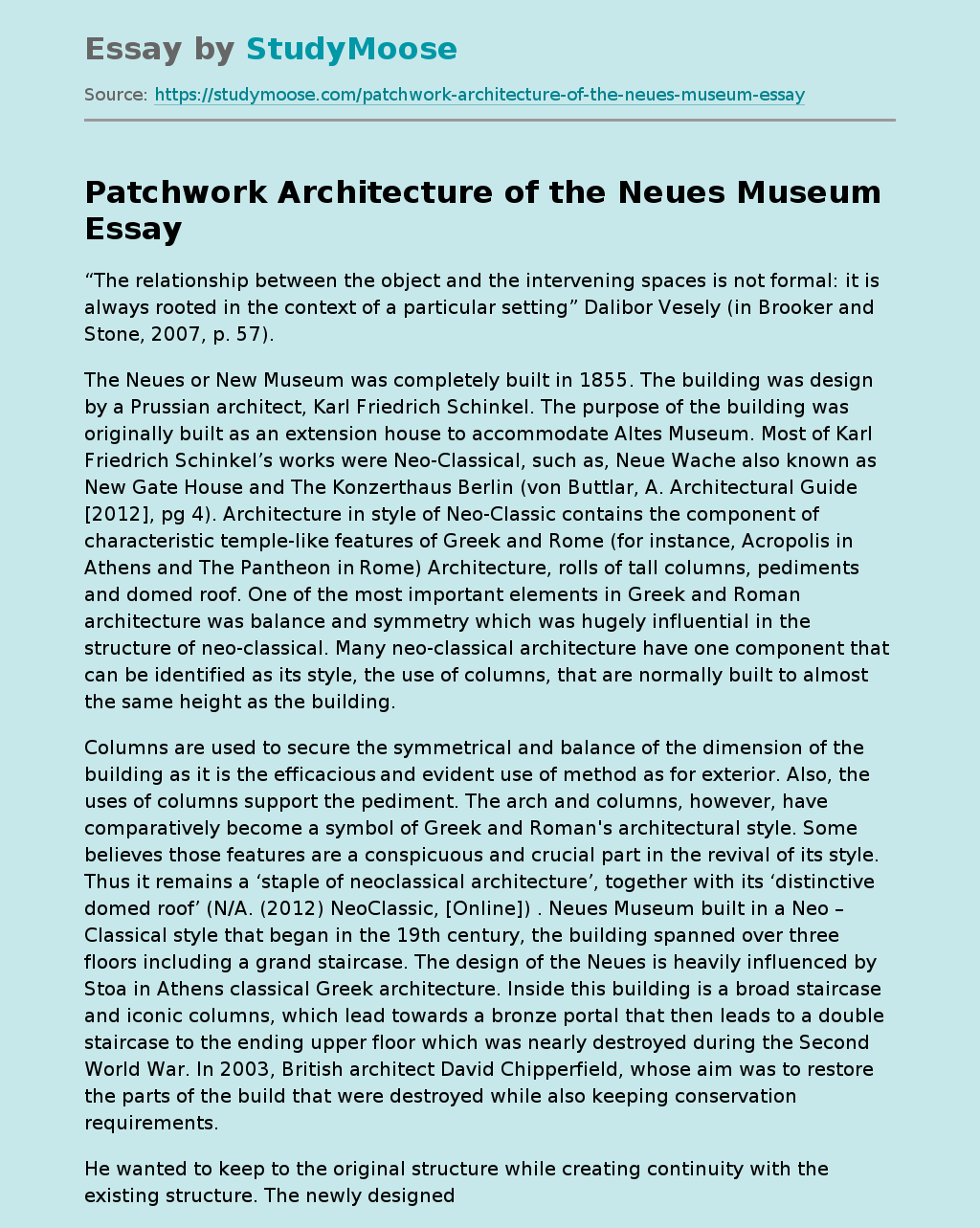