Set in 1881 Starkfield, Massachusetts, Edith Warton’s _Ethan Frome_ reveals a recurring theme found in literature: “the classic war between a passion and responsibility.” In the novel, published in 1911, protagonist Ethan Frome confronts his two private passions, his desire to become an engineer that conflicts with his moral responsibility to his family and his passion for Mattie Silver that conflicts with his obligations to his sickly wife, Zenobia Frome. Ethan, being a man of responsibility, places the needs and wants of his family, before his own, which causes him to experience only “[s]ickness and trouble” and “that’s what [he’s] had his place full up with, ever since the very first helping” (12).

Don't use plagiarized sources.
Get Your Custom Essay on Passion and responsibility in Edith Warton’s “Ethan Frome” Just from $13,9/Page

The reader sympathizes with Ethan’s struggles as he abandons his studies at Worcester, considers running away with Mattie, and even attempts suicide with Mattie.

When Ethan is confronted with family obligations, his desire to become an engineer ceases and, as a result, he leaves Worcester. Later in his, life he starts to realize that leaving Worcester also meant that he would forget about all of the things he learned.

Because Ethan was unable to finish his education as Worcester, he looks at the book that the speaker left him and knows that would be “things in that book that [he] didn’t know the first word about” (14). Though Ethan had to leave Worcester prematurely, he thinks fondly of his university days and longs to recreate them. Ethan’s “best parlour” (112) that he uses as a sanctuary is modeled after a professor he had at Worcester. His professor, a minister, fed Ethan’s curiosity by lending him books. However, Ethan’s sense of responsibility made him give up the knowledge he loved and even years later he clings onto the spark of knowledge that he gained from university.

Ethan’s longing to run away with Mattie is obliterated by his overpowering responsibility to his wife. Wharton poses a striking contrast between the two women, using light and warmth to represent Mattie and dark and coldness for Zeena. Mattie brings out a part of Ethan that he had lost when he left Worcester. Ethan embraces this newly found self with the desire to talk to her and not be the shy man he was in his Worchester days. To Ethan “all his life was lived in the sight and sound of Mattie Silver” (35), and because of her he has found a new happiness. However, this newfound happiness can be eradicated by a mere mention of his wife’s name. Zeena’s name “threw a chill between” (73) Ethan and Mattie. Zeena’s character juxtaposes the character of Mattie; all the warmth that Mattie brings into the Frome home turns wintry when Zeena is present. Ethan’s responsibility to Zeena causes him to stay in the cold town of Starkfield.

Even the townspeople believe that Ethan has “been in Starkfield too many winters” (7). When Ethan is around Mattie he is filled with “a warm sense of continuance and stability” (45). Yet Zeena stands in the way of Ethan being with Mattie like he so frequently imagines. This causes Ethan’s heart to be jerking “to and fro between two extremities of feeling” (95), his responsibilities lie with Zeena but Mattie inflames his passions. Red is the archetypal color for passion and it reflects Ethan and Mattie’s inability to act on their mutual desire for one another. When Mattie first arrives in Starkfield she wears a “cherry-coloured scarf”(27) and later a “streak of crimson ribbon” (71) through her hair that catches Ethan’s attention. Ethan “had taken to the girl from the first day”(*******) and his passion for her never left him.

Ethan and Mattie’s rebellious attempt at suicide is inhibited by his thoughts of Zeena. Ethan learns that Zeena wishes to send Mattie away and replace her with a hired girl. He knows that he should respect his wife’s decision but feels that his “heart was jerking to and fro between two extremities of feeling” (95). Ethan chooses this path with Mattie because it is her last hope, without living in Starkfield and moving with no job experience she only has one thing to offer. Ethan knows this, but also tries to ignore it thinking that she might get a better life, he tries to help but he “can’t lift a hand for” (138) Mattie. He has tried every possibility, so together Ethan and Mattie finally go coasting. With Starkfield alight below they “looked ahead with rigid faces” (138). Everything passes by in a blur, all that matters is that Ethan and Mattie are together and they are in their own world. Mattie suggests going down again but this time they will “never come up anymore” (143).

Ethan’s final request is for Mattie to sit behind and ” to feel [Mattie] holding [him]” (146). It is Ethan’s own clash of emotions that cause him to agree with Mattie’s suggestion that the two of them should commit suicide by coasting into the elm tree at the bottom of the hill. Everything goes to plan until “his wife’s face…thrust itself between him and his goal” (147), causing him to swerve, but he soon rights it. Instead of hitting the tree head on, the two hit it on the right side. The “smash-up” (4) is not enough to kill them but it does leave the pair seriously injured. When he hears Mattie’s twittering sounds of pain, Ethan realizes his failed rebellious action and his sense of responsibility returns. Ethan hears his horse begins to whinny and thinks to himself that “[he] ought to be getting [the horse] his feed” (149). Frome’s injuries remain as a constant reminder of his inability to escape his responsibilities.

In _Ethan Frome_ the progonist Ethan Frome cannot escape his responsibilities in his life, whether it be his parents or his wife. Now he also has a new weight to carry, along with the responsibility, it is that Mattie’s condition is his fault. Ethan learned that responsibility trumps passion in all forms, he tried to follow his passions but he could not escape reality. That reality is a life with Zeena taking care of Mattie, and Ethan living his hard life with seeing everyday what he did to the love of his life.

Wharton’s use of the responsibility vs. passion motif in her novel Ethan Frome is very apparent. Frome is haunted by his own responsibilities first to his mother and father and then later his responsibility regarding his marriage to Zeena. It is these responsibilities that stand in Ethan’s way of achieving a “paradise,” whether it be in the form of an education at Worcester, or a relationship with Mattie Silver. 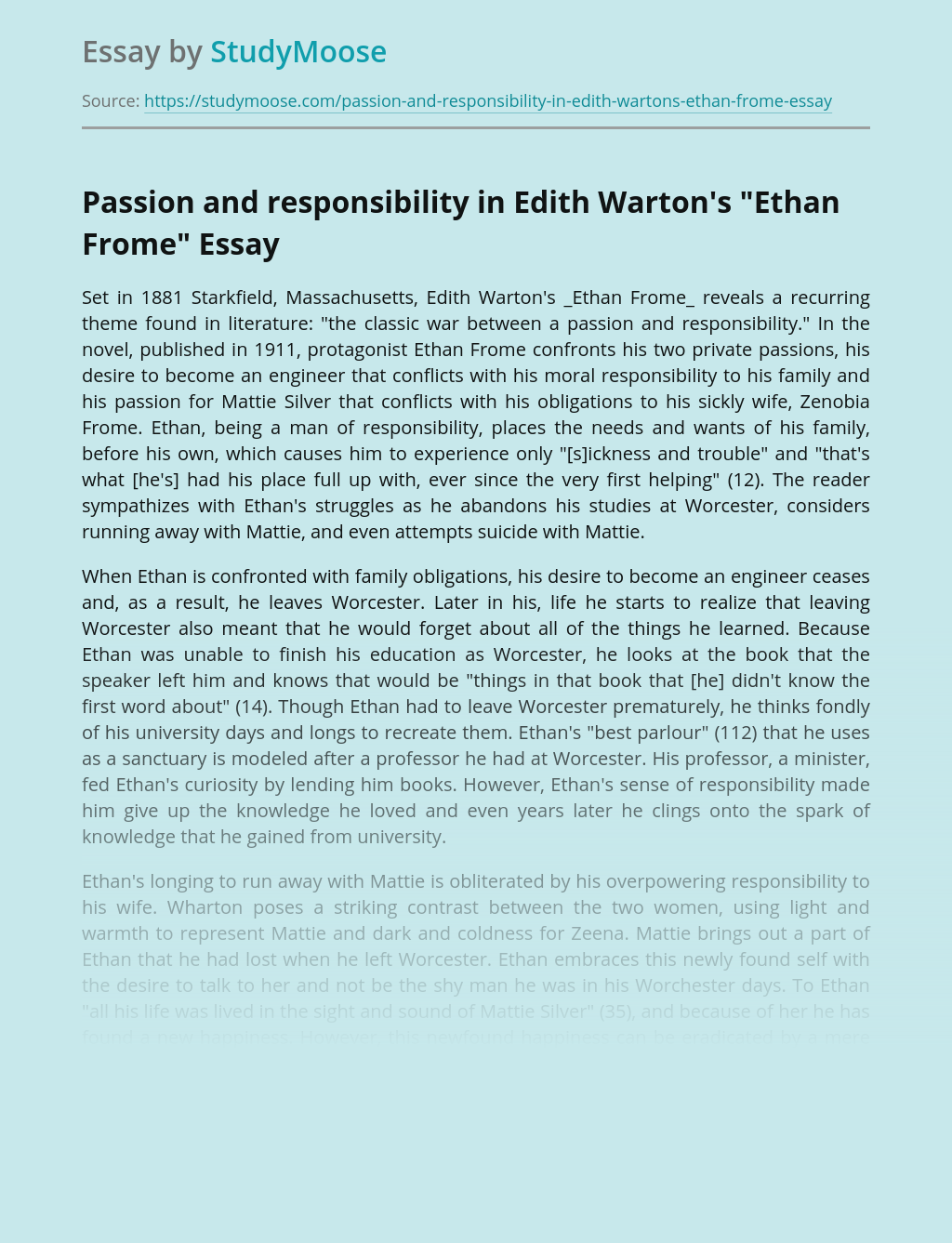 See attached slide on final page There are a number of problems facing Sof-Optics (detailed below). The most severe problems are in the CSR department: Major problems: Going forward, Sof-Optics will be under pressure to lower prices since B&L (the industry leader) just slashed prices by 25%. This is especially troubling, given the point that...

Effect of pH on the Rate of Fermentation in Yeast

The experiment conducted regarding the effect of pH upon the rate of fermentation in yeasts was composed of two main parts or set of procedures. The first part of the experiment was focused upon the analysis of changes or shifts in pH induced by yeast samples that are placed in varying levels of pH. From...

After the Civil War foreign policy issues in America take a back seat to domestic economic and political issues and the Infrastructure which was destroyed by the war is gradually rebuilt. Perhaps most importantly the industries, created out of the necessities of war, expand in a growing domestic economy. The political union which was shattered...

Dear Recruiter, Request you to please fill in the questionnaire and assist me comprehend the labour laws assembled in your organisation that will help me to produce factual data to my project. Job Subject: Worker well-being measures followed in little fabric units in Bhiwandi city Please be felt confident about preserving the confidentiality of the...