“In the absence of a written constitution, the UK Parliament is the sovereign law-making power, incapable of limiting its own power, or being limited by an external power.

Don't use plagiarized sources. Get your custom essay on
“ Parliamentary Supremacy ”
Get custom paper
NEW! smart matching with writer

This includes rules pertaining to how courts should handle contradictory provisions, or Acts, as well as the status attached to an Act of Parliament. This doctrine recognises Parliament as the ultimately supreme, sovereign law-making body within the UK. The rules that construct the doctrine of Parliamentary Supremacy may be found in a number of sources; case law, constitutional conventions, statute law, and the writing of famous academics. The purpose of this essay is to analyse the extent to which the UK Parliament is “the sovereign law-making power, incapable of limiting its own power, or being limited by an external power.”

Anytime the sovereignty of the UK Parliament is mentioned, Prof A.V. Dicey’s classic, three-point definition springs to mind. According to Dicey, a) Parliament has the right to make or unmake any law whatever, b) no Parliament can bind a future Parliament, and c) person or body has the right to override an Act of Parliament. The three points given above summarise the Doctrine of Parliamentary Supremacy (or Sovereignty).

Dicey’s first and last points, pertaining to Parliament having the right to legislate on any matter and no person or body being able to override those laws, have been strongly confirmed by UK courts. Judges have repeatedly upheld the principles of Parliamentary sovereignty, in cases and quotes.

Sir Ivor Jennings once stated “Parliament can legislate to ban smoking on the streets of Paris; Parliament can legally make a man into a woman.” In Madzimbamuto v Lardner-Burke (1969), Lord Reid stated “It is often said that it would be unconstitutional for the UK parliament to do certain things…but that does not mean it is beyond the power of parliament to do such things.” Similarly, in ex parte Simms and O’Brien (1999), Lord Hoffman stated “Parliamentary sovereignty means Parliament can…legslate contrary to fundamental human rights.” In Brit Railways Boards v Pickin (1974) and Edinburgh and Dalkeith Rly Co v Wauchope (1842), the courts refused to challenge the validity of an Act of Parliament, regardless of procedural flaws. This gave rise to what is now the “Enrolled Bill Rule”- which is courts will not look beyond the “Parliamentary roll.” In Jackson v AG (2005), the validity of the Act of Parliament 1949 and subsequent Acts passed under that procedure, was questioned. The concept of Parliamentary supremacy was challenged in obiter statements of three judges; however, the Acts were ruled as valid and the sovereignty of Parliament was again confirmed by the courts.

Dicey’s second point relates to Parliament being unable to bind its’ successors. The mechanism through which courts give effect to this point is known as the “doctrine of implied repeal.” This requires courts to enforce the latter, and impliedly repeal the former, when two Acts conflict with each other. This is exemplified in the Ellen Street Estates Ltd v Minister of Health (1934). Thoburn v Sunderland City Council (2002) examined the doctrine of implied repeal more closely and held there is a special class of statutes, called, “constitutional statutes”, that cannot be impliedly repealed. Rather, they can only be expressly repealed. These constitutional statutes are those defining fundamental rights, such as the Magna Carta and Bill of Rights 1689. The Act of Union 1706 Act intended to bind future UK Parliaments, but that eventually failed. In MacCormick v Lord Advocate (1953), it was argued the principle of Parliamentary sovereignty is not recognised in Scottish law. The “manner and form argument” declares that although there is no limit to the subject matter on which Parliament can legislate, and a Parliament cannot bind its successors, the manner and form in which it legislates may be limited. Special procedures for legislation may be set down by the courts. This was illustrated in Minister of the Interior v Harris (1952).

The two factors that challenge the concept of Parliamentary sovereignty are the ECA 1972 and the HRA 1998. EctJ judgements are binding on all UK courts, and according to S.2 of the ECA 1972, all Acts of Parliament are to be construed according to EU law. EctHR judgements are not strictly binding on the UK Supreme Court (formerly House of Lords), but the HRA 1998 calls for all legislation to be interpreted according to Convention rights. If an Act of Parliament is incompatible with the HRA, a “declaration of incompatibility” will be issued by the courts but the Act will remain in force until Parliament amends it. This “declaration of incompatibility,” in fact, enphasises the sovereignty of Parliament. In the Jackson case, Lord Hope states the supremacy of Community law limits the sovereignty of the UK Parliament.

In summary, it appears the UK Parliament, to a large extent, is a “sovereign law-making power, incapable of limiting its own power,” as evidenced by many cases mentioned above. Parliament can legislate on any subject matter it chooses to, and no body has the authority t override an Act of Parliament. As illustrated by the Enrolled Bill Rule, even procedural flaws cannot invalidate an Act of Parliament. However, it is limited slightly by external powers, such as the ECA 1972, the HRA 1998, and special procedures may be laid down to make legislation difficult. However, the fact that Parliament, of its own free will, chose to pass the ECA and HRA indicates that these Acts do not limit its’ sovereignty. Parliament can, after all, legislate to undo the above-mentioned Acts and procedures if it chooses to. The phrase “what the queen enacts in Parliament is law” remains a fairly accurate embodiment of the doctrine of Parliamentary Sovereignty. 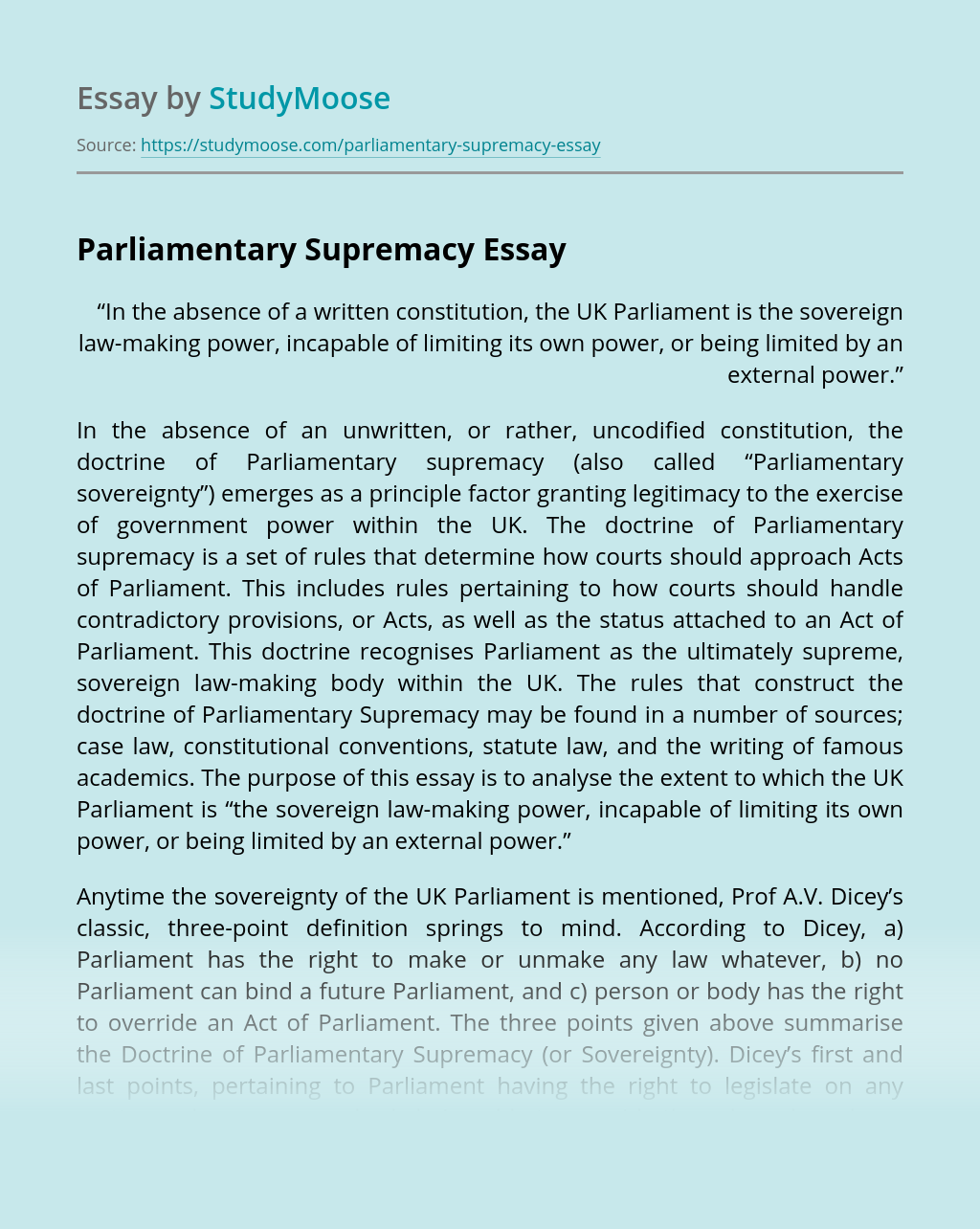